Carter takes aim at Cochrane as Tassie tensions rise; Ceglar’s chance to ‘put his hand up’

In today’s AFL briefing, your daily wrap of news:

Check back throughout the day for more updates.

The man who conducted an independent report into the viability of a Tasmanian AFL licence says he has been mystified by critics of the proposed new club and has taken aim at Gold Coast chairman Tony Cochrane.

As the 18 club presidents prepare to vote in August on whether Tasmania should be awarded the league’s 19th licence, tensions are growing between those backing the club, and those concerned it could be an economic drain. 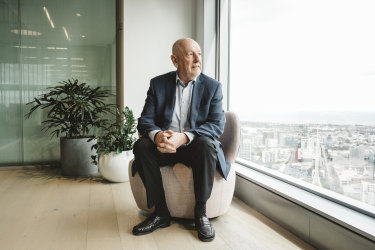 Colin Carter, the man who tabled an independent report into Tasmania’s AFL bid, says he has been mystified by critics of the proposed new club.Credit:Tash Sorensen

Swans chairman Andrew Pridham and Cochrane have continued to cast doubt on whether having a 19th team is viable, prompting Colin Carter, who last year tabled the Carter review into the merits of a Tasmanian team, to make his feelings clear.

“I find some of the comments from other clubs mystifying. I am a great fan of Tony Cochrane and what he has done up there. I got to know him a bit when I was up in the hub about 18 months ago, but I can’t even begin to fathom his attack on a Tasmanian team on the basis that it can’t be afforded,” Carter said on SEN on Friday.

The Suns have averaged $20 million a year in funding from the AFL over the past decade – only behind fellow expansion side Greater Western Sydney – but this money has been off-set in part by the broadcast value of the ninth game per round they have generated.

The debate over whether approval should only be granted if a state-of-the-art stadium in Hobart is part of the deal has become a major stumbling block between the Tasmanian government and the AFL, with league chief Gillon McLachlan declaring earlier this year that a new stadium had to be part of any expansion licence.

However, Carter restated on Friday that a new stadium was not immediately required.

“My personal view at the time was that it wasn’t immediately necessary. I didn’t dip into that. I had strong views about the sort of stadium required and my views generally run in the direction of, it should be smaller than most people want,” Carter said.

“I think Australians have always wanted big stadiums. If you look at the Premier League, more than half of them in England are less than 30,000 capacity. Some of them are less than 20,000 capacity. It seems to me that the prospects of a Tasmanian football team are enhanced if the stadium is not too big.”

Club bosses have been waiting to see the detail of the league’s proposal, with impatience growing as the vote grew nearer with many details yet to be outlined.

Tasmanian Premier Jeremy Rockliff has threatened to withdraw his government’s $150 million funding offer if the league continues to play hardball on the terms of the new club.

Rockliff also said his government would not fully fund a new stadium but had offered to deliver a maximum of 50 per cent of the funding provided the “development site and cost are acceptable to Tasmanians”.

Carter said he believed a new club would be a “competitive force”, falling in the bottom third, given the expected level of community support and sponsorships.

“I think it’s going to be hard for the people that want to kill it but that’s not to say there aren’t some big issues,” Carter said of the overall bid.

“The stadium debate that is going on the moment, I don’t know whether that’s just argy-bargy or whether it’s a seriously terminal factor in it. Hopefully, it’s not.”

While the focus is on Joel Selwood’s 350-game milestone this weekend, veteran ruckman Jon Ceglar has a chance to prove why he should be part of Geelong’s finals run. 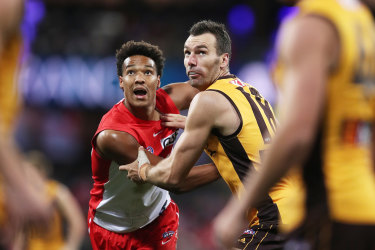 Former Hawk Jon Ceglar (right) gets his chance to step out for Geelong for the first time on Saturday.Credit:Getty Images

Ceglar, the former Hawk, fractured his foot in the VFL in April and has had to work his way back. He finally gets to step up against the Western Bulldogs at GMHBA Stadium on Saturday night, with Rhys Stanley (knee) out, although the Cats have revealed the latter could return as early as next week.

Coach Chris Scott said Ceglar had an opportunity to make a statement, as the Cats seek a tenth-straight win.

“It hasn’t been a perfect road for Jon. He has had some bad luck with injury, but he has prepared himself well to the point where, when the opportunity arose, he would be ready,” Scott said on Friday.

“That’s happened this week with Rhys Stanley being out injured. It’s a dual benefit. He gets a chance to come in and play with the Cats for the first time but it’s also late in the year, in a pretty exciting time for us. It gives him a chance to put his hand up but it also gives us a chance to have a look at him and make sure we have some options when the inevitable curveballs get thrown our way.”

Ceglar averaged 15 disposals and 21 hitouts in his final year at Hawthorn.

Scott said Ceglar and Stanley could play in the same side, giving the Cats flexibility.

The coach said Patrick Dangerfield was a “bit stiff” in his back last weekend but had trained strongly on Wednesday and was now “fine”. Sam Menegola (knee) will miss but Tom Stewart returns from suspension, Scott reminding the star half-back that he does not owe the club anything.

Selwood, 34, will become the first Cat in VFL-AFL history to reach 350 games. The match will also be the 300th time when he and Tom Hawkins have played together as teammates.

The champion midfielder is uncontracted for next season but has been managed well this season and appears likely to go on. While his focus is on a fourth flag, his first as skipper, he said on Friday that 400 matches was a possibility.

“I sometimes let the mind wonder but, to be honest, it’s only to the end of the season, and that’s lifting up that premiership cup,” Selwood said.

“I quickly get back on the job that we have got at hand. That’s exactly where I am at, at the moment. Our group is playing great footy at the moment but we still have steps to take going forward. Four hundred – don’t think so, but maybe.”

Unsurprisingly, Selwood has a long list of achievements. These include being the quickest man to 350 games. He has taken 15 years and 120 days, besting Carlton’s Craig Bradley’s record by seven days.

Selwood has played in the fourth-most wins of any man, while he and Scott share the record for most matches together as coach and captain (239).

Scott, the Brisbane Lions premiership defender who once played against Selwood, said Selwood’s standing at the club was clear.

“I am biased as well. The captain-coach relationship is such an important one. I just feel so privileged to have worked with such a great captain. I think the positional comparisons are hard but … I think I have said it before, I find it hard to compare eras, but he is the best player I have seen in my time when you take everything into consideration.”

The Dogs have pulled a selection surprise, dropping full-back Alex Keath but recalling Zaine Cordy on a night they face the twin-headed monster of Hawkins and Jeremy Cameron. They have been boosted by the return of playmaking half-back Caleb Daniel.

‘It’s been a long wait’: Hannebery ready to return for Saints

St Kilda coach Brett Ratten insists Dan Hannebery has done a “power of work” and is ready to return for the Saints’ key clash against Hawthorn on Saturday.

Hannebery, a three-time All Australian, has not played since round 23 last season, but has been recalled for the must-win match, as the Saints deal with injuries to playmaker Jade Gresham (knee) and Jack Billings (back).

It’s been a gruelling four seasons for Hannebery, who has only managed 15 senior matches since crossing from Sydney because of soft-tissue issues. He had calf surgery in March and even went to Munich in May to visit former Bayern Munich and Germany national team doctor, Hans-Wilhelm Muller-Wohlfahrt – the renowned soft tissue guru. 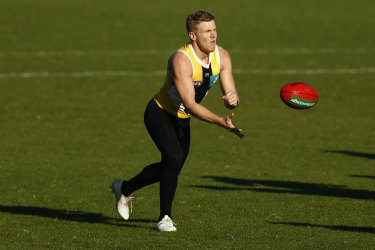 Dan Hannebery is back for his first game in almost a year, having had calf issues.Credit:Getty Images

“He’s done a power of work. The continuity from session to session just kept increasing and has been really pleasing. He’s had two games back. He’s clean with the footy and his voice and his running was up to where we expected so it’s giving him the opportunity to play, which is great,” Ratten said on Friday.

“It’s been a long wait and, with that, comes a bit of anxiety. He’s got nothing to worry about because he’s just got to stick to what he does and that’s just bring the voice which he is outstanding at. There will be a few butterflies for him, but as soon as he runs out he will be fine.

“I think if you’re at the ground as a supporter, you’ll probably hear him; that’s the influence he has. We don’t expect Dan to have 35 [disposals]. We just expect him to do his role and play his part. But what he will bring I know is the direction, leadership, voice, and he gives confidence with that when he does that to a teammate. That’s what we’ll get out of Dan.”

Gresham was hurt against West Coast last weekend and will require a PCL reconstruction.

“We just had to wait a little bit for the surgeon to give us an indication where it was going to sit. Could we get through the rest of the year? Could we take a risk? That’s why we delayed the decision to just see. With four weeks to go could we do something to maybe get back out there, but there’s no chance,” Ratten said.

“He’s pretty disappointed. He stayed away from the footy club on Tuesday, just to digest what it could be. He just stayed away to be by himself, have a little bit of time at home. Then the decision came through. He is pretty shattered.”

The ninth-placed Saints are outside the top eight only on percentage but must topple the Hawks as they face a rugged run home against premiership contenders Geelong, the Brisbane Lions and Sydney.