Sydney will become a temporary home for the Broncos due to a three-day lockdown in Brisbane that comes into effect from 5pm on Monday afternoon.

The Broncos’ schedule had been up in the air after a community transmission of the UK COVID-19 variant was detected in the city. The Queensland government made the decision for them by announcing a snap lockdown early on Monday. 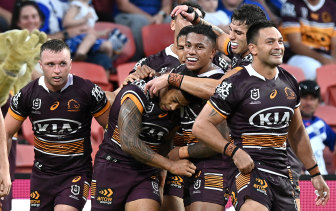 The club will board a charter flight to Sydney and remain away from home until at least their round five game against South Sydney on Thursday, April 8.

They are due to play the Storm in Melbourne on Friday night. That fixture is still likely to happen, although there have been reports of the game being moved to Sydney should Victorian health authorities baulk at Brisbane players entering the state.

No games can be planned after that until there is clarity around the level of community spread in Queensland. Brisbane’s players had been in home isolation since their win over the Bulldogs on Saturday afternoon as a precaution.

“The players and staff have taken the changes in their stride, and while it’s tough on many of our team with young families, they are keen to get on the road and prepare for a great challenge against the Storm,” Broncos interim chief executive Neil Monaghan said.

“We will then stay in Sydney to get ready for the Rabbitohs game, which will ensure the continuity of the competition.

“Coach Kev Walters and all the players and staff are seeing this time on the road as a great opportunity to further strengthen their team bond, especially coming off the back of a morale-boosting win.”

Brisbane’s draw was challenging enough without having to relocate at short notice. They beat the Bulldogs in one of the worst games in recent memory and now face two competition heavyweights back-to-back.