The Giants are rallying around Bobby Hill after he was diagnosed with testicular cancer, ruling the dynamic small forward out of AFL action indefinitely.

In a statement released on Sunday morning, Greater Western Sydney confirmed the shock discovery and said the 22-year-old will undergo surgery next week. 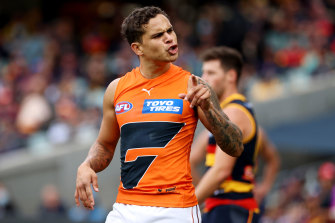 Bobby Hill has been diagnosed with testicular cancer.Credit:Getty

Hill played in the Giants’ 14-point defeat to the Brisbane Lions on Saturday, collecting six possessions and kicking one goal at the Gabba.

He will be medically assessed once he recovers from his surgery to determine if any further treatment will be required, the club said.

“Bobby and his family have our full support, as always, as they go through this period,” said Jason McCartney, the Giants’ general manager of football.

“His health and wellbeing is our absolute priority and he’ll have the best medical care as he undergoes surgery on Tuesday and beyond.

“There’ll be a period of time for him to recover before further medical assessment to understand if any additional steps are required.

“Bobby is in good spirits and knows he has the support and love of the entire Giants family.”

Hill has shown glimpses of freakish skill in his 41 games for the Giants since being drafted at the end of the 2018 season.

He is also a new father, after his partner Georgia gave birth to their son, Bobby jnr, last year.

Hill requested a trade to Essendon during the trade period last year to be closer to friends and family who are based in Melbourne, but the Giants refused to consider it and held him to his contract, which expires at the end of this season.