Carlton will challenge Lewis Young’s one-match ban for a front-on hit on Cameron Zurhaar, as the Blues assess the fitness of two key prime movers ahead of the Mother’s Day clash against Adelaide on Sunday.

Young was involved in a shoulder-to-shoulder bump which was assessed as forceful front-on contact on hard-working forward Zurhaar in the final term. The incident was assessed as careless conduct, high impact and body contact, but the Blues said on Monday they will challenge the penalty. 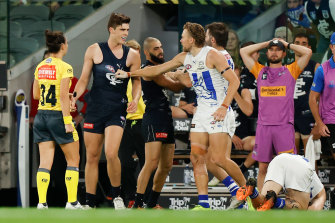 “I hope Carlton challenge the Young one, in particular,” Buckley said on SEN.

“I hope they challenge the Young one because I don’t know how you can say that that contact was high. It hit him, and it was a solid bump, and I don’t know what his (Young’s) other options were other than not contest – and not contesting is not an option.”

Stocker, however, will miss the Marvel Stadium clash, after he elected not to tackle and was charged with rough conduct on Tarryn Thomas in the third term. There was an accidental head clash, and Stocker was offered a one-match ban. Stocker left the field soon afterwards with an injured shoulder and finished the match in a sling. 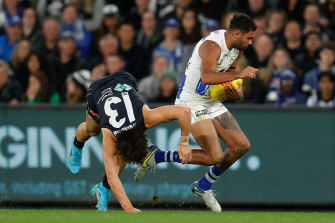 There were five charges laid from the match, including a one-match ban offered to Nick Larkey for tunnelling Young when the former Bulldog flew for a mark, only to crash to the ground.

Having improved to a 5-2 win-loss record, the Blues may be well-placed to snap an eight-year finals absence but the internal word is they remain a work in progress. And swingman Nic Newman says there is one area in particular where the Blues can only get better when health permits.

“I think we probably only had our full complement of mids for two weeks, the last few weeks we have had one out, whether that be Matt Kennedy or ‘Crippa’ or George (Hewett),” Newman said.

The hard-running utility is right, for if the “full complement” he referred to features Patrick Cripps, Sam Walsh, Adam Cerra, Kennedy and Hewett, and that high five has only twice lined up – in a one-point win over Hawthorn in round three, and a 30-point loss to the Gold Coast a week later.

Hewett (corked calf) did not play against North but coach Michael Voss said he was likely to return this week against Adelaide, while Kennedy was back in the fold after missing the Perth trip.

The Blues also hope playmaking half-back Zac Williams (Achilles soreness) returns this week, having been a late withdrawal on Saturday.

“(Debutant) Jack Carroll came in and showed a lot of good signs. Paddy Dow absolutely tore the VFL apart (on Saturday). We feel like we have a bit of depth there,” Newman said.

This depth will now also be tested in the ruck, for frontline big man Marc Pittonet (PCL) will miss up to three months. But the athletic Tom de Koning showed good signs against one-time All Australian Todd Goldstein on Saturday, and the Blues dominated the clearances.

That Cripps, now fresh, happy and healthy, is having a stellar season and almost certainly is leading the Brownlow Medal count helps to cover most cracks.

“He (Cripps) was extraordinary again (against North). For those that are inside the four walls, it’s not surprising,” Newman said.

“I think his body is feeling good, which helps. The amount of work he puts in through the week, he is as professional as anyone you will ever see. He is bloody determined to get this club to where he wants it to be.”

Cripps, as Voss relayed on Saturday night, often talks about “earning the right”. Yet to taste a finals berth in his eight seasons at Princes Park, Cripps has well and truly earned the right to be alive come September.

The Blues owe Cripps plenty, and that’s why the mature performance against the Kangaroos – an eight-point half-time lead became a 40-point buffer by the final break – was so important. This was a clash they lost last year when their season fell apart under David Teague, but this Voss version has a greater defensive system and a more resolute nature.

“Definitely. We have struggled to do that in the past, even in the early stages of this year, when we have got out to 30 or 40 points, we have let teams back in,” Newman said.

“We were pretty determined to keep the foot down and not let the team back in. I thought it was great maturity, especially as we had lost a couple with injury and a couple of sore boys.”