Blues on the hunt for top-four spot after downing Giants

A spectacular high-flying grab from Toby Greene buoyed Giants fans at Marvel Stadium on Sunday afternoon, but Carlton supporters had the last laugh as the Blues followed last week’s loss to Geelong with a 36-point win over GWS.

With plenty of jostling within the top end of the ladder for top-eight positioning in the coming weeks, it was an important win for Carlton and they’ll have their elbows out for an unlikely but not out of the question top-four spot come September. 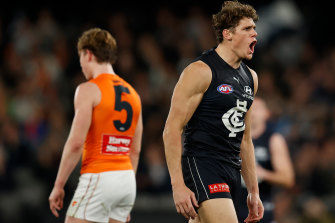 Charlie Curnow was on song for the Blues.Credit:AFL Photos

The Blues are now a game behind the top half of the top eight and have a hard run home, facing Melbourne and Brisbane in coming weeks.

After a first-half arm wrestle, Carlton booted three goals in succession in the middle of the third quarter, off the boots of Harry McKay, Charlie Curnow and Josh Honey, and were away with a healthy lead that they maintained until the end. 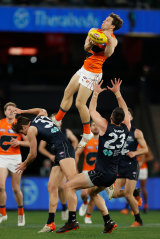 Patrick Cripps snuffed out hopes of a comeback for GWS in the final quarter with a huge kick from a set shot just inside 50 just over five minutes into the fourth, followed by two Curnow goals, giving Carlton a 29-point lead.

GWS, despite the best efforts from Tim Taranto, struggled with some disconnection between their mid and forward line, while Carlton’s Sam Walsh, Cripps, Adam Cerra and Matthew Kennedy were all effective at the source and able to get the ball up the ground.

Carlton had not only more inside 50s (56 to 48), but were significantly more efficient in their forward half.

Greene’s potential mark-of-the-year contender – flying high off the back of Lewis Young for an exciting grab to finish a kick down the line – was arguably his most exciting moment of the game, but he also made the most of the opportunities in the Giants’ forward half, kicking three goals.

Carlton dodged a bullet when Walsh worryingly was helped off the ground by trainers early in the third term, appearing to wince in pain and unable to put weight on his foot. But he was back later in the same term to a huge applause from the crowd.

Jacob Weitering also appeared to have a leg niggle in the third, getting treatment on the boundary from trainers but was back in play shortly after. 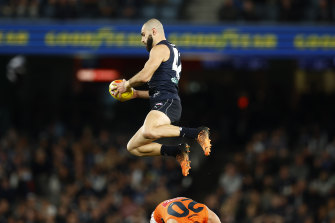 Adam Saad led a well set-up Carlton defence, continuously steading the ship for Carlton and chopping off the Giants’ passages of play, while his lightening pace and run and carry set up the forwards well. He also had an impressive high-flying grab in the second half to contend with Greene’s earlier leap.

At the other end of the field, Harry Himmelberg and Lachlan Keefe had their work cut out for them, interchanging match-ups between Curnow, who booted four goals, and McKay, who finished with two majors.

Carlton next play Adelaide at Adelaide Oval before facing two top-four sides in Brisbane and Melbourne, who could give them a finals-type test. Last week they were given a reality check by a methodical and dominant Geelong.