Carlton small forward Zac Fisher has recovered from an ankle injury and could replace the injured Michael Gibbons for Sunday’s pivotal clash against the West Coast Eagles at the SCG.

Fisher, who reinvented himself as a high-pressure, speedy forward last season, has not played since he was hurt against Collingwood in round two and required surgery. He has trained strongly in recent weeks but the Blues have yet to determine whether he returns via the seniors. 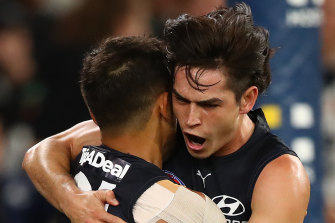 Zac Fisher (right) has been cleared to return from injury.Credit:Getty Images

“Zac has had a really good block the last three weeks,” Russell said.

“He looks good, he is available to play this week which is great.”

Paddy Dow will also be in the selection mix, having returned from a hamstring strain in a scratch match in Sydney last weekend.

The Blues have continued to train in Sydney this week after their loss to the Swans because of Victoria’s lockdown.

Gibbons had his afternoon against the Swans curtailed by a hamstring strain in the third term and will not be available until after next week’s bye.

“He’s got a low-grade hamstring strain. He definitely won’t be available this week,” Russell said.

“He’ll rest, then we’ll get him going and he will be a test to play leading into the GWS game.”

Charlie Curnow continues to lift his training loads and the Blues are hopeful he will return in the final six rounds of the regular season. Curnow, 24, has not played a senior match since June 2019 because of knee issues, having had his latest surgery in November last year.

The Blues have a 4-7 win-loss record and must defeat the Eagles to have any chance of remaining in finals contention.

Coach David Teague remains frustrated with his team’s inability to compete or follow a game plan for the full match. Defending turnovers and inconsistent ball use remain the biggest issues for the Blues, while a solution needs to be found for opponents who look to exploit co-captain Patrick Cripps when running him from defence to deep into their own forward line as he often lacks the pace to keep up. Western Bulldogs superstar Marcus Bontempelli and Swans great Josh Kennedy have done exactly that over the past month.

Co-captain Sam Docherty will also need to be more assured in terms of his ball handling and decision making in defence if the Blues are to mount an unexpected run to the finals.

In the month after the mid-season break, the Blues face Greater Western Sydney, Adelaide, Fremantle and Geelong.