Wayne Bennett has given his blessing for teenage sensation Isaiya Katoa to make a potential Test debut – before he’s even played against open-age players this year – as the Dolphins’ future halfback prepares to join Tonga’s squad.

Katoa, who was poached by the NRL’s newest franchise for their inaugural season, is poised to replace Kotoni Staggs in Tonga’s halves should the Broncos centre keep his spot in NSW’s State of Origin squad for game two.

The 19-year-old led the Panthers to a dramatic SG Ball title earlier this year, but is yet to taste any action at NSW Cup level this year – let alone NRL – before being drafted into Tongan camp.

Tonga’s coach Kristian Woolf wants him to be part of the squad in the lead-up to the World Cup, and included the young star in his 25-man squad for the mid-season Test against New Zealand at Auckland’s Eden Park.

It could mean Katoa’s initiation to playing men could be up against the likes of clubmate James Fisher-Harris, Joseph Tapine, Brandon Smith and Nelson Asofa-Solomona.

Katoa’s signature sparked a war of words between Bennett and Panthers coach Ivan Cleary, who said the Dolphins were treating Penrith “like their backyard”. 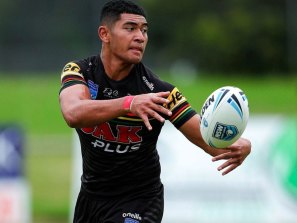 Penrith halfback Isaiya Katoa is bound for the Dolphins next season.

Katoa’s path was always going to be blocked at Penrith by NSW halves Nathan Cleary and Jarome Luai.

Asked about Katoa possibly playing his first top-level game in a Test, Bennett said: “It will be good for him and I’m looking forward to seeing him play. We’ve signed him, so that’s what we think him.

“The five-eighth [Luai] is going to be there for the rest of his career and a halfback who will never leave the joint, so where’s this kid going to play? That’s the reality. There’s nothing here for the kid. If Cleary was at the end of his career it might be different, but he’s in the middle of his career.”

St George Illawarra’s Junior Amone is named to start at halfback for Tonga, against a New Zealand halves pairing likely to include Jahrome Hughes and Dylan Brown.

Amone had the best game of his NRL career in the Dragons’ thumping win over South Sydney at WIN Stadium on Thursday night, and will be asked to steer the Mate Ma’a in the Test.

“He’s lightning,” said Jack de Belin, Amone’s Dragons teammate. “He’s so good, he’s so classy. It’s different playing off the back of Benny Hunt, because Benny can steer the ship and Junior can play that free-flowing off the cuff [style].

“He’s got deadly feet, a good passing game, he’s got it all. You forget how young he is. He’s only 20 years of age. Hopefully the club locks him up for life and he goes nowhere because I want to play some more football with him, for sure.”

Bennett had been asked to act as an adviser to Dean Young in Tonga’s camp, with head coach Woolf staying in the United Kingdom to fulfil his commitments with St Helens.