4 Pines Park: A battered Manly survived a Gold Coast fightback to cling to a 26-18 victory in front of a heaving Easter Saturday home crowd.

The Sea Eagles led 24-4 at half-time and looked ready to pile on a cricket score.

But the Titans, just as they did seven days earlier against Parramatta, refused to surrender and almost produced a huge come-from-behind boilover.

Manly marched to their fourth straight win, but it could come at a cost.

There were injury concerns with two-try hero Haumole Olakau’atu coming from the field with a leg injury late in the second half.

Prop Sean Keppie was also concussed, along with Tolu Koula; Josh Aloiai picked up a “burner” to his shoulder, but returned in the second half; and Reuben Garrick played most of the game with a corked quad.

The Sea Eagles were already without Tom Trbojevic (knee), Marty Taupau (back), Josh Schuster (ankle), while centre Morgan Harper was unavailable because of COVID.

Manly will chase a fifth straight win next week against Cronulla. 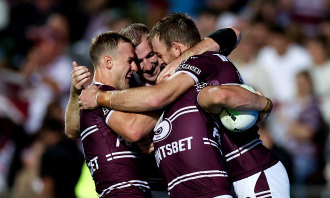 The Sea Eagles celebrate a try by Kieran Foran on Saturday.Credit:Getty

Garrick told The Sun-Herald afterwards: “We weren’t brave tonight. We were the opposite of that if anything. We started well and set the platform, but the second half the Titans refused to go away, we’ve seen it countless times this year, they got some tries of ricochets and kicks … we’ve got a bit to work on there.

“Haumole has come on in leaps and bounds, he’s putting in the work at training, and we can only hope he can play like that consistently every week.”

The 16,220 who packed into 4 Pines Park had plenty to cheer early. The communal atmosphere was never better illustrated than after full-time when Sea Eagles favourite Jake Trbojevic was spotted helping remove the padding from the goal posts and dragging it back to te storage room.

A quick play-the-ball from Koula and a lovely short kick from Daly Cherry-Evans put Olakau’atu over for his first.

The ever-improving Garrick had the Sea Eagles’ second after some slick passing from Jake Trbojevic and Foran put the fullback into space.

Manly thought they had a third try when Jamayne Isaako spilled a Cherry-Evans bomb, and Jason Saab scooped up the ball to score.

But the bunker ruled Saab had given AJ Brimson a gentle nudge as he chased after the kick. The fans did not agree, while commentator Shane Flanagan admitting “if we start looking at everything, we’ll be here all night”.

Isaako and Brimson did well to hold up Olakau’atu over the line, but two plays later the Tongan was impossible to stop as he bagged a double.

Olakau’atu could have had a third try when he fell just short chasing down another Cherry-Evans grubber.

The back-rower is one of the most devastating ball-runners in the NRL, and delivers the aggression at about half the cost of what David Fifita is being paid by the Titans.

The debate will continue to rage north of the border about whether Fifita needs to see more ball. He set up Isaako’s first try, and never looked like being stopped when he bagged his own in the second half.

Tries to Brian Kelly, Fifita and Tino Fa’asuamaleaui got the visitors back to within a converted try with 15 minutes remaining.

They enjoyed all the possession but could not deliver the knockout blow. Their spirits were crushed when Karl Lawton tried to scurry over from dummy-half, only for Fa’asuamaleaui to be penalised for getting involved in the play from an off-side position.

Cherry-Evans was lined up for the field goal when Lawton took the ball himself. He launched a captain’s challenge and the potential one point became two points.