Architect of change: Wall crumbles as Clarkson makes his presence felt at North

Alastair Clarkson has been charged with rebuilding North Melbourne on the field, but one of his first moves has been to take down a wall at his new club – literally.

As Luke McDonald and Jy Simpkin were officially unveiled as co-captains after a training session of more than two hours at Arden St on Monday, McDonald said Clarkson had orchestrated change in unexpected ways in a bid to unify a club that has experienced three years of pain. 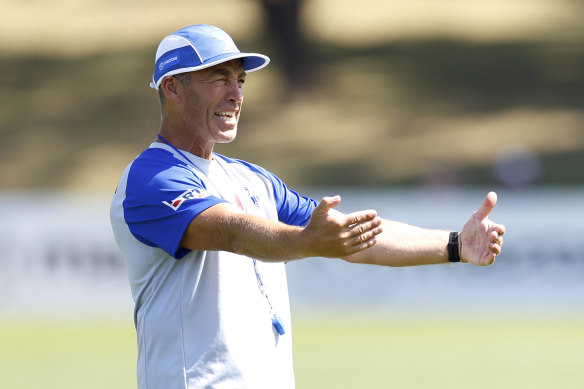 Tear down that wall: Alastair Clarkson at North Melbourne training on Monday.Credit:Getty Images

This rebuild has included having a wall, which largely hid the football department from other departments, removed, helping to create more of a unified and “one-club” approach.

“The footy department has always had a big wall put up, and we are sort of, almost hidden, like it’s a secret business. But day one when he [Clarkson] got to the club, he was like: ‘That wall is going down’, and now the footy department is in the middle of the club,” McDonald said.

“So, I feel like we are really, really building towards being that one club where we are literally having our meetings in front of everyone. We have got admin staff, we have got people visiting walking through, it’s just a great feeling around the club. It’s not just the footy department, everyone is all together.

“I feel like it’s something all clubs aim to have – that one club with the AFL men’s and W (women’s) and everyone else – but it is something we are really starting to live. It’s been driven by Clarko.”

Senior club officials had almost been apologetic in the past when it came to passing through the football department, but that has now changed.

Simpkin said he had been surprised by how “funny” Clarkson was, having thought his largely serious, even fiery, public image was what he generally would be.

The four-time premiership coach, however, remains involved in an independent racism investigation into events during his time at Hawthorn. Clarkson has denied all allegations against him and is cooperating with the investigation.

The Kangaroos are supporting midfielder Tarryn Thomas, who has been charged by police with threatening to distribute an intimate image. The Kangaroos also revealed last week that the 22-year-old had been caught drink-driving while on a suspended licence during the Christmas break. He had been due to front court last week, but the case has been adjourned to a later date.

Both incidents were lodged with the AFL’s integrity unit.

“We are always there supporting Tarryn. Obviously, that matter is before the courts – there is not too much we can say. But Tarryn is a great kid. He is as talented as anyone on our list. We are going to be there for him, no matter what,” McDonald said.

Thomas returned to training on Monday, the one-time half-forward now preparing to be a rebounding half-back.

“He has been doing a lot of work with the back line … he has been super down there. Obviously, [he has] played more as a half forward, inside, but it just shows the flexibility in his game,” McDonald said. 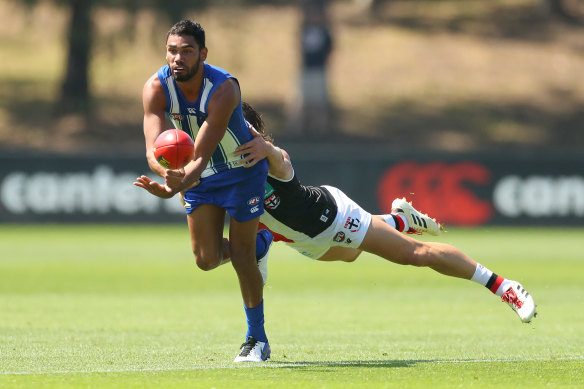 “Him, learning alongside Aaron Hall, he has got some serious tricks. He could be a real weapon for us off the half-back line.”

The Kangaroos also hope their prized top selections in last year’s national draft have an impact.

Harry Sheezel, the No.3 overall pick, has impressed in a deep-forward role in match practice, but George Wardlaw, taken with selection No.4, has been on a restricted program.

Will Phillips, the No.3 pick in the 2020 national draft, is in line for a round one return after a frustrating 2022 with glandular fever. The slick midfielder debuted in 2021, but did not play at AFL level last year, managing only three VFL games.

Former Hawk Liam Shiels, a three-time premiership player under Clarkson, has provided experience and nous on the training track, and is helping implement an attacking game plan the Kangaroos hope can provide some much-needed wins, having won only nine of 61 combined games over the past three seasons.