Andrew Johns: Manly can’t win – and there will be unrest

Once again, I’m reminded of the old quote: sport and politics don’t mix. What a mess the Manly jersey saga has been.

The people I feel so sorry for are the fans. But I’ll get back to that in a minute.

I can understand all the different arguments: respect for the LGBTQI community, and respecting the religious beliefs of people.

What isn’t in dispute is this has been a result of poor communication throughout the club.

This week we’re supposed to be celebrating Women In League Round. I can remember in 2002 Manly were the trailblazers for women at football clubs.

When the club was in dire straits after the failed Northern Eagles venture, Wendy Harmer and Sarah Murdoch started a group called the Eagles Angels. 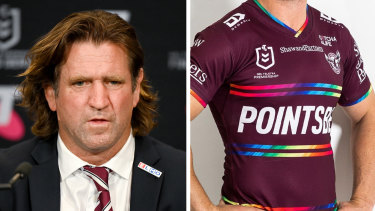 They had numerous women from the northern beaches, such as Layne Beachley, Melinda Gainsford, Laura Enever and Kerri Pottharst, who jumped on board. The whole focus on Women In League Round has been taken away by wearing the rainbow jersey.

But back to the fans for a moment. This game against the Roosters, in the scheme of the season, is so important for both clubs. There’s a logjam with four teams on 20 points: the Roosters, Sea Eagles, Raiders and Dragons. I dare say this may be the game that costs Manly a spot in the top eight. It’s just so ridiculous.

I know there will be denials, but there would be unrest among the players. Quite simply, Manly just can’t win.

The Roosters are warming up towards the end of the season with Joseph Manu and Luke Keary back, plus their forward pack is in great form. Jared Waerea-Hargreaves is getting back to full fitness and James Tedesco is taking his game to a whole new level. They were in second and third gear against the Knights and still piled on the points last week.

The only positive for Manly is they get Jake Trbojevic back, but they’d need four Jake and Tom Trbojevics to win this game.

It’s such a shame because there is so much at stake, but this game has lost a lot of fizz.

Return to two refs – but with this restriction

You couldn’t make up the fiasco at the end of the Tigers-Cowboys game. But let’s start talking about solutions because the system we have right now is broken and turning people off the game.

Firstly, on the bunker. I recently read about how a guy by the name of Rick Williams introduced NRL officials to video technology with a tour of the NHL’s facilities. He gave them one warning: you can’t let video technology infiltrate play-by-play in the game. Well, look where we are. 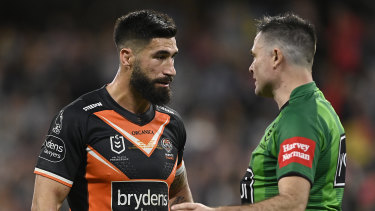 The bunker should be used for try-scoring situations and that’s it. Just stay out of the play. As we’ve seen in recent weeks, it just makes every decision more murky.

I’ve said it a thousand times before, and I’ll say it again, the game is not played in slow motion. When we look at tries, they should look at it two or three times at real speed and then make a call. If it looks like a try, the benefit of the doubt should go to the attacking team.

If someone is going to score a try and the ball comes five millimetres away from his hand, and then he gets his hand back on it and pushes it down, how was he supposed to regrip it?

I would go as far as to suggest that maybe there needs to be an agreement between the NRL and broadcasters about not showing endless replays in super slow motion. Let’s do it in real-time and get on with it.

Now to the referees. I feel sorry for them. There’s way too much pressure on them the way the game is played these days. The game is getting faster, and with that they’re under fatigue even more.

I think we have to go back to two referees. We need one referee at the ruck whose whole brief is to control and manage the ruck. They don’t have a whistle, so they can’t blow penalties, but they can communicate with the senior or lead referee who can control the 10 metres, watch the markers and look out for foul play.

There is just too much responsibility on the main referee right now. They’re making all these different calls about “surrender” and “dominant” and everything else.

If we have that second referee we can eradicate the third man in who dives at someone’s legs. It’s the most cowardly play in the game. The incident with Liam Knight in the NSW Cup recently was just wrong.

Teams, players and coaches are always going to push the limits at the ruck. All we heard about going into the last two Origin games was whoever won the ruck would win the game.

It’s time we had more eyes on it to manage it.

I’ve got to finish on a positive: Dragons captain Ben Hunt is in the best form of his career.

He’s copped flak at certain stages after moving to the Dragons, but he won Queensland game three of this year’s State of Origin series with the charge down. That’s all I’ll say about that. 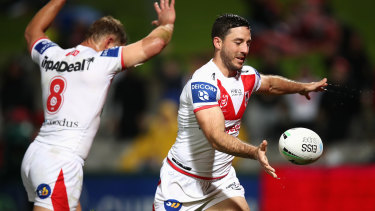 Ben Hunt has been in blistering form for the Dragons.Credit:Getty Images

He’s pretty much carried St George Illawarra all year with a young five-eighth and a few different fullbacks. I think this has been his best year and he’ll probably win the Dally M.

I’m tipping him to be the best player on the park and the Dragons to upset the Cowboys at Kogarah on Sunday.

I think North Queensland has hit a bit of a flat spot, which is understandable as they’ve been up for so long. They’ve had players in Origin and naturally, after that, you have a flat period of three or four games before you can see the semi-finals coming.