Andrew Johns: I never thought I’d say this about the Storm

Here’s something you don’t usually say about a team about to play the Melbourne Storm: I reckon the Sharks are morals in Thursday Night Football.

They’re at full strength except for Siosifa Talakai, who is playing for NSW and Nicho Hynes, who was released from Blues camp but has since tested positive to COVID-19. That’s a blow for Craig Fitzgibbon’s team.

Already feeling the pain of a growing injury list, Melbourne will be missing Cameron Munster and Harry Grant because of Origin while Felise Kaufusi is overseas seeing his ill father.

The Storm are going to struggle.

If there’s one place you don’t want to play when it’s raining, with the wind howling in from the south, it’s PointsBet Stadium.

For some reason, it sucks in all the bad weather. Every time I played a night game there, it was wet and windy. The same is expected for this match. 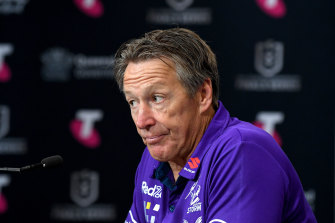 This is an important one for Cronulla, who are fourth on the ladder. In the next month, they have the Cowboys (away), Penrith (away) and Souths (home).

They need to bank points now. Win this and they can consolidate their place in the top-four.

I love the way the Sharks play.

They have a well-balanced team, and a well-balanced pack backed up by quality wingers in Ronaldo Mulitalo and Sione Katoa. They get their sets rolling forward every time. 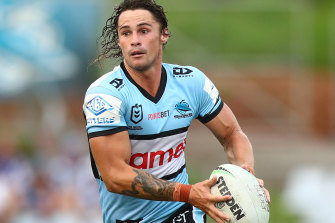 Nicho Hynes looms as a key figure for the Sharks against his former club.Credit:Getty

The player I’m most impressed with this season is hooker Blayke Brailey. He’s a great talent, especially when he’s running the ball and creating. He’s gaining confidence with each match.

Melbourne were horrible against Manly. I can’t recall them playing that badly.

Hooker Brandon Smith said he’d never heard a spray like the one coach Craig Bellamy gave them. That’s saying something.

The problem for Melbourne are their outside backs with injuries to Xavier Coates, George Jennings, Reimis Smith.

Against Cronulla, with all their big guns out, they will need Jahrome Hughes and Ryan Papenhuyzen to step up.

Because of the conditions, the kicking game will be important. Without Munster, it puts a lot of pressure on Hughes to get that right.

South Sydney fullback Latrell Mitchell’s decision to rule himself out of the Origin decider was selfless and humble.

It would’ve been great to see him take the field at Suncorp Stadium on Wednesday night. He hadn’t played for 10 weeks but made his comeback against Parramatta and owned the big moments. 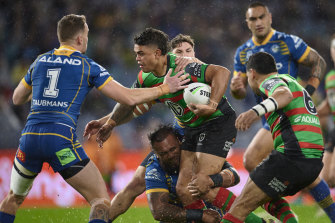 Latrell Mitchell starred in his first game in 10 weeks against Parramatta on Saturday.Credit:Getty Images

The thing about Mitchell is he makes the players around him better. He gives them confidence, especially Cody Walker, who looked far more comfortable with Mitchell there.

Winger Alex Johnston must see those two and think it’s Christmas, knowing he’s playing off the back of what they can create.

Mitchell looks fit, healthy and happy. That’s the key for him.

The only downside for me is he’s going to be taking on Newcastle at McDonald Jones Stadium on Friday night.

It’s a big game for both clubs. If the 12th-placed Knights can win, they maintain a slim hope of making the top eight. Souths, who are seventh, can start pressing for the top four.

Penrith are high-balling at the top of the ladder, but if there’s one team they’re looking at from over their shoulder, it’s South Sydney.

McLean up to massive Blues task

NSW coach Brad Fittler has picked a strong team that can beat Queensland, although Cowboys prop Jordan McLean in place of the injured Payne Haas is an interesting one.

I’m biased because I love him as a player, but I would’ve gone for Roosters lock Victor Radley. 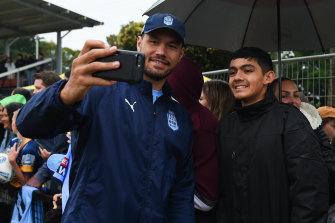 Jordan McLean will become one of NSW’s oldest Origin debutants in next week’s decider.Credit:Getty

Start the match with Junior Paulo and Jake Trbojevic then have Angus Crichton and Radley off the bench. Victor, with his speed around the ruck and toughness, is made for Origin.

I’m certain that Jordan can do the job for his state. He’s been in the system, on an extended squad, before. This is his time and I’m sure he’ll make the most of it.

I really feel for Jack Wighton missing out — but I understand it.

Talakai is more of a threat playing in the back row, where Jack hasn’t played any footy.

The Blues have a massive job ahead of them.

They’ve won only two deciders in Brisbane: 1994 and 2005. The Maroons were flogged in game two in 2020 then were a different team at home, winning the series under Wayne Bennett.

It goes to show you how hard it is to win in Queensland.

Playing at Suncorp Stadium early in your career can be intimidating and hostile. The older you get, the more you enjoy the gift of playing there.

You talk about the crowd, but you can’t combat it. The two-minute bell rings, you run out into the stadium, and the atmosphere hits you in the face.

It will be a dry track. Both teams will want to use the ball. Can’t wait.