(not including the Jordan Dawson deal)

5. Nathan Kreuger and pick 55 (Geelong) traded to Collingwood in exchange for pick 41.

9. Collingwood traded pick 22 to Fremantle in exchange for pick 27 and a future third-round pick.

10. Will Brodie, pick 19, pick 61 and pick 69 (Gold Coast) traded to Fremantle in exchange for a future second-round pick and a future fourth-round pick.

11. Adam Cerra (Fremantle) traded to Carlton in exchange for pick 6 and a future third-round pick.

Jordan Dawson will become an Adelaide player when trading reopens on Wednesday, the final day of the trade period, after a late-night agreement was reached between the Swans and Crows on Tuesday.

Adelaide will give Sydney the future first-round pick – tied to Melbourne’s finish next year – that they had secured in the opening days of trade period. 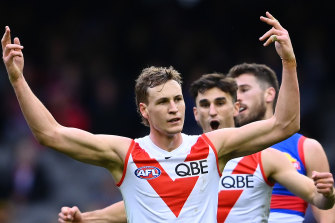 Listen and catch up

Good morning and welcome to our AFL trade period coverage.