Fremantle were six players down due to COVID-19 but they refused to let that stop them from claiming a 72-point win over North Melbourne at Optus Stadium on Friday night.

The young Dockers (7-1 win-loss) showed they can lose some bodies and find workable replacements leading from start to finish against the struggling Kangaroos (1-7). 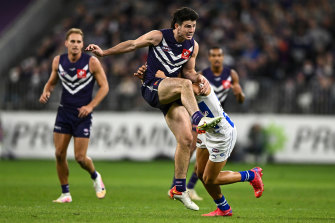 Andrew Brayshaw of the Dockers snaps a kick during the 2022 AFL Round 08 match between the Fremantle Dockers and the North.Credit:Getty Images

Andrew Brayshaw (34 disposals, seven tackles) was a force in midfield as was Will Brodie (37 disposals), Caleb Serong and ruckman Sean Darcy while Heath Chapman led the Dockers’ rebounding defence to one of its most assured performances this season keeping the Kangaroos to just three goals, all of them after a goal-less first quarter.

Opinion: AFL needs to lift its game after self-inflicted pain

It is difficult to recall a worse week of self-inflicted pain for the Gillon McLachlan administration as the fall-out from the damning report into the dearth of female umpires continues to expose some sloppy workings at head office. 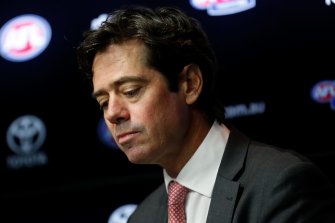 You have to go back to the game’s callous and scandalous treatment of Adam Goodes when the relatively fresh young CEO McLachlan was unable to influence his divided commission and some weak club administrators to do the right thing by Goodes and ensure he was not lost to the game.

Big out for the Suns in their match against Sydney

Beveridge rues ‘night of carnage’ as injuries bite the Bulldogs

Western Bulldogs coach Luke Beveridge says his injury-ravaged side’s “night of carnage” may have been a byproduct of a short turnaround between last Sunday’s win over Essendon and Friday night’s loss to Port Adelaide.

Imposed with a five-day break between fixtures and already cruelled by a mounting casualty ward, the Bulldogs’ stocks were further decimated at Adelaide Oval on Friday night. 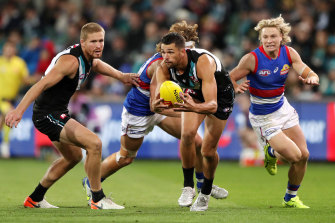 Centre half-back Tim O’Brien was substituted out with a calf injury in a calamitous third quarter, before half-forward Laitham Vandermeer went down clutching his hamstring moments later.

After seven rounds last year Essendon had two wins. This year they have one.

After seven rounds last season the Bombers felt like a team performing to expectation. This year they do not.

Last season ended with them shooting beyond expectation, losing an elimination final to the Western Bulldogs in the Launceston wet. This year a bottom-four finish would not surprise. 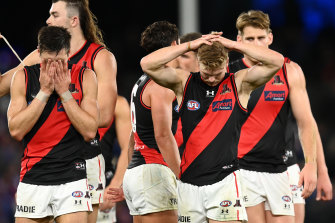 A dejected Essendon leave the field after their loss to the Western Bulldogs.Credit:Getty Images

How did we get here?

First, of those first seven games this year, the Bombers, along with Hawthorn and Gold Coast, have played the most matches against the current top eight.

On having Dusty back: “It was good, it’s exciting from our point of view. He’s such a wonderful player. It’s great to have great players back. He’s probably going to be a little bit rusty today. But a half-going Dustin Martin is still pretty good.

On how careful he has to be with Dusty’s fitness: “A little bit careful, he’s done a power of work by himself, but it’s not team training, so he will be a little bit underdone, but he’ll play probably more forward than mid today.

On his importance to the side: “He’s such a spiritual leader of our footy club and the energy he brings, as soon as he came back into the building it gave us a bounce.”

On finding Richmond’s brand of old: “We’re probably not winning the ball back enough. Noah Balta and Liam Baker are leading that part of the game, so we thought we’d stabilise our defence, and low and behold we go to that model last week, and we play more Richmond-like. It’ll be system v system [today].”

On Josh Caddy’s retirement: “We spoke about Cads yesterday. He’s a great competitor, teammate and clubman, and what he did was incredibly selfless. It sums him up. He’s a great Richmond man, always will be.”

On Noah Balta: “He’s a little bit of both. We love what he brings. It’s great energy. Ideally, we like him down back, but when we need a goal we can swing him forward.”

On today’s battle: “Our systems are relatively similar. It’s who plays their system better who will get the result.”

On playing in front of nearly 18 million fans through his career: “It’s unreal, especially when you have these traditional rivals, Essendon, Carlton, Richmond, where you know there’s going to be 65,000 plus. I still pinch myself I get to do it.”

On how he finds so much time and space: “I don’t know to be honest, it’s how I play. It’s something I haven’t really practised. It’s my brand I suppose. I’ve enjoyed the role at half-back, I think it’s keeping me fresh and I’ve enjoyed it.”

On winning the centre clearances: “Once you’re in here, you’re trying to get the best position on your guy. Against Essendon for example, Draper was hitting it back a lot, so I was trying to get there. We just play the percentages, play the numbers game.”

On his morning routine: “Auskick this morning. It was his first one this week, so he loved it. Since having kids, it’s all about him and Auskick today.”

An important player at Tigerland