The Eagles have lost defender Tom Barrass with Hugh Dixon coming into the side.

Real Footy Podcast: Demons then daylight: Which team is the second seed in the AFL?

Melbourne are the clear leaders of the competition. But which team can take the spot as second best after the Dees?

This week on the Real Footy podcast, Michael Gleeson, Jake Niall and Peter Ryan discuss the teams that are in contention for the second seed.

The Lions look the best candidates, but have been flaky at times. The Swans have a game style that can hold up in finals; it will be interesting to see those two teams clash on Sunday. Are Geelong in the mix? And Fremantle are performing well, especially in defence. But is there doubt around their star quality up forward?

Richmond coach Damien Hardwick said there is a “strong possibility” Tigers star Dustin Martin will return to the team next Saturday afternoon against Collingwood at the MCG.

Martin returned to training at Punt Road last weekend for the first time since the club granted him indefinite leave for personal reasons in late March, but he did not travel to Perth to face a West Coast side that will field its 12th debutant this season on Friday night. 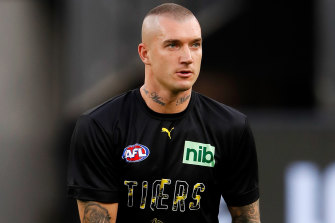 In a notable omission on Thursday night, Melbourne have lost a fourth player this week to COVID-19 protocols – defender Harrison Petty. He will miss Saturday’s match against Hawthorn.

G’day everyone and welcome to our AFL live blog for Friday night football as Richmond visits West Coast Eagles at Optus Stadium.

We will have all the major moments and post-game reaction in what shapes as an important game for both clubs as both of them have had more losses than usual to start this season.

Please feel free to leave a comment on the blog at anytime. First bounce is set for 8.10pm AEST.

Enjoy the night to come.