The Power are aiming for three wins in a row for the second time this year, but their record against top-eight teams (1-3) hasn’t been flash in 2021.

Conversely the Cats have a 3-2 record against the top eight and have won six of their last seven games by an average of seven goals, with the one loss in that stretch a two-point defeat to Sydney in a game where they basically won every key stat except for the one that matters most on the scoreboard.

Geelong also well and truly has the wood over Port Adelaide, winning 19 of their last 23 encounters, but the Power have won two of the last three, including last year’s qualifying final.

Ken Hinkley’s side has a good record at home this year (5-1), but have looked gettable when playing the better teams as evidenced by the recent loss to the Bulldogs and their heart-stopping two-point win over Richmond.

Despite losing three of their last four at Adelaide Oval, the Cats have a decent record at the venue (6-7) and have an overall 3-3 record against the Power there.

Cats bring back the big guns 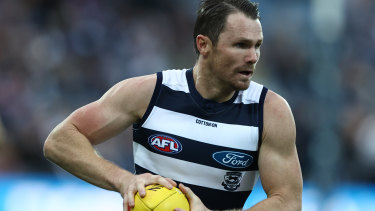 Port Adelaide turned on their famed afterburners and made Geelong pay the ultimate price for persistent poor finishing by booking their first preliminary final berth since 2014.

Top of the ladder since round one, the Power, fittingly, are the first team to progress to the penultimate week of the season after impressively absorbing everything the Cats could throw at them.

Port led at every change, but it wasn’t until their dominant third quarter that they really looked on top, after a first-half arm wrestle between two teams desperate to shake off a long tale of recent finals woes. 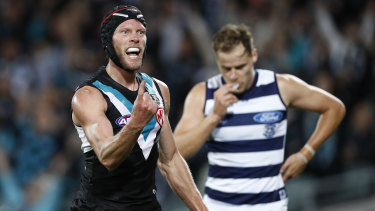 Hitting targets in attack no problem

Port Adelaide and Geelong rank second and third respectively for mark inside-50 differential. The Power have out-marked their opponents inside 50 by 3.8 per game, while the Cats aren’t too far behind with a positive differential of 3.1. Tom Hawkins has taken 41 marks inside 50 – ranked third in the AFL.

Hello and welcome to our live, rolling coverage of this Thursday night blockbuster between Port Adelaide and Geelong from Adelaide Oval.

What a way to kick off round 13? And how good is it to have Thursday night footy back? OK, I’ll stop with the rhetorical questions now…

This game promises to be a beauty – a heavyweight showdown between the Power (fifth) and the Cats (third) and the winner is guaranteed to be in the top four by the end of the round.

And the contest will go ahead thanks largely to strict COVID protocols imposed by the SA government which forced the Cats to not only lock down while still in Victoria, but also fly in and fly out of Adelaide.