A giant headache for Cameron, as Geelong inflict another loss in Canberra for GWS

Greater Western Sydney coach Leon Cameron lamented that Geelong “clearly” had won the first half of Saturday evening’s clash at Manuka Oval in Canberra. Unfortunately for the Giants, things did not improve in the second half, with former Giant Jeremy Cameron leading the way with five goals for the victors.

Cameron had a fine evening at Manuka Oval, booting three goals in the first term, and one in the third term, as the Cats – stung by last week’s home loss to Fremantle – opened up a 32-point buffer by the final break.

That proved to be the match-defining quarter, as Cameron added his fifth goal in the final term, the Giants falling to a 53-point loss, their fourth-straight defeat in the nation’s capital. 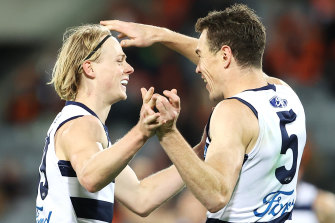 The win improves the Cats to a 5-3 win-loss record but leaves the Giants at 2-6, with their finals hopes in disarray. It also heaps more pressure on coach Leon Cameron, who appears to be in his final season, with contract discussions delayed until later in the year.

Veteran Mitch Duncan was the Cats’ dominant playmaker across half-back, particularly in the first half when he had 20 touches. His influence helped to negate any advantage the Giants had in centre and around-the-ground clearances, coming after Cats’ ruckman Rhys Stanley (ankle) was a late withdrawal.

This left the Cats without a frontline ruckman, forcing versatile defender Mark Blicavs to shoulder the burden against Brayden Preuss and Matt Flynn. While the Giants won the hit outs, the athletic Blicavs was a significant factor with 26 disposals.

The Cats were without skipper Joel Selwood but Patrick Dangerfield was influential through the midfield upon his return from injury. Dangerfield, fresh and moving well, was a bull at the stoppages, leading his side in contested possessions, while Cameron Guthrie was his typical busy self.

“We played well. If you use the ball well, you can defend with ball in hand … it was really pleasing. We still have some areas to work on – we are not the finished product yet,” Dangerfield said.

What proved pivotal was the Cats’ defensive zone, for this largely meant the Giants could not carry the ball smoothly from half-back, something they had done well against the Crows last week.

When the Giants did get the ball inside attacking 50 in the third term, they wasted their opportunities. Jesse Hogan, while working hard up the ground, missed two easy shots which robbed his side of momentum.

Gone but not forgotten

Cameron was once a fan favourite among Giants’ fans but that’s not the case now. The former Giant heard the jeers when he marked on the lead from a well-weighted pass from Dangerfield, and snapped successfully, giving the Cats their first goal. That was his 51st career goal at the venue – the most of any player.

There was a moment of controversy in the first term when Greene was paid a free kick for a push in the back from Jed Bews on the wing. But that free was reversed by an umpire standing about 40 metres away in the middle of the ground – and not the umpire in the immediate vicinity who had called play on – when Hogan inadvertently made contact with Bews’ cheek. The decision was costly, for it led to Cameron’s second goal. Hogan’s displeasure was clear. Bews left the field to undergo a concussion test, meaning Mark O’Connor was sent to Greene. Bews’ afternoon finished in the second term when he was subbed off and replaced by debutant Mitch Knevitt, a local Cats’ product from Grovedale who won the Geelong Falcons’ best and fairest last season.

The Cats took the chance on former Crow and Tiger Tyson Stengle as a delisted free agent. Mentored now by former Blue and Crow Eddie Betts, Stengle delivered a clever soccer goal in the second term, converted a deliberate out of bounds in the third, and eased through a set shot in the final term, leaving him with 16 in eight games. His pressure inside 50 has also been telling.