‘A bit affronted’: The driving lesson that shaped a young Demon’s career

Jake Bowey’s talent was never a point of dispute but his commitment to becoming the elite player others thought he could be was a question incoming Sandringham Dragons coach Josh Bourke posed late in 2018.

Bowey, now a Demon, may be preparing to play in an AFL grand final in only his seventh senior match but the determination and willingness to excel can be relayed back to a blunt chat with Bourke, a school teacher and father of three.

“He is a special kid. I look back, when I walked in the door at the Dragons, here is this little red-headed fella who is in the metro hub but no one is quite sure why,” Bourke recalled on Monday. 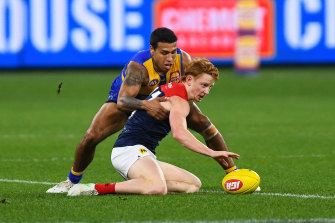 “He is talented, but he has got some work to do. I think at that stage, and I think he would admit this, he probably didn’t quite realise what he was setting out to do, if that makes sense. He was a bit naive about it.

“He missed a whole lot of training with us and I will never forget one night, I have rung him up, and this was really early on, and I said: ‘Where are you?’”

Bowey replied: “Ah, I have booked my driving lesson. I forgot to tell you.”

Bowey had been a star junior with the Highett Football Club in Melbourne’s south-east – on one weekend he was the best afield in the under-11 premiership and backed up a couple of hours later in the under-12 grand final – but he was now at the pointy end of his junior development when potential careers can be made or broken.

“He had missed a whole heap of training with us because of [representing Vic] Metro, which we get, but then he gets the chance to train with us, and he has gone and had his driving lesson,” Bourke said.

“I said, ‘Right, we are having a chat’ and I walked away from the clubrooms on the phone to him and I let him have it a bit.

“I said: ‘You’re kidding yourself, you’re a mile away from it, your training habits are poor, whack, whack, whack.’ I think he was a bit affronted, a bit surprised at the start, but by the length of the straight from that moment, he is one of the best operators, trainers, his diligence in the way he approached the game – special kid.” 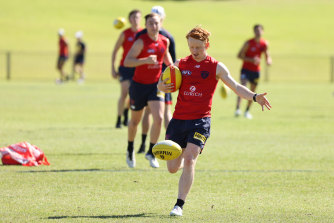 The Demons echo that same sentiment when it comes to explaining Bowey’s strong training ethos and thirst to learn. It’s been a remarkable run home, for he only debuted against the Gold Coast Suns in round 20, that afternoon symbolising the pandemic-impacted seasons of 2020 and ’21.

Bowey had to deal with the nervous energy all debutants feel but in his case it was stretched over two days, for that was the weekend when the Demons flew to Queensland, only to have to return when the border closed, the match shifted to Marvel Stadium.

Coronavirus protocols meant Bowey’s family, including father, Jake, the former St Kilda rover who played 85 matches between 1988 and 1994, were unable to be in the dressingroom, and could only wish him the best via Zoom.

Bowey handled the occasion well, slotting into half-back and having 13 disposals in a 98-point win, although the post-match celebration was subdued because Port Adelaide needed to use the dressingroom later that day.

He credits assistant coach Troy Chaplin for his development defensively this season, having been an attacking wingman with the Dragons.

“He has probably been my go-to man, have probably annoyed the bit out of him at training and watch vision with him all the time,” Bowey said.

“He’s probably been the most important bloke at the club for me, getting me developed and helping me learn the defensive side so well.”

A fortnight later, Bowey became the fourth Demon to be a Rising Star nominee this season, having 18 touches against the Adelaide Crows, when he left one Crow worse for wear after the pair had attacked a loose ball at half-back.

It shouldn’t be forgotten that Bowey had almost all of his 2020 season wiped out because of the pandemic, managing only limited minutes in a trial match against the Oakleigh Chargers. To his credit, he retained a positive mindset and trained at a nearby oval.

“What it did last year, kids like Jake that are diligent, will do their own work, are motivated, good mental health, he is a happy, positive kid, they just go ahead of kids because they are out, they are kicking the footy, they are doing what they can when they can, and they don’t lose sight of what they are working towards in a good way,” Bourke said.

While all parties, heading into last year’s national draft, recognised there may be limitations because of Bowey’s height (175cm), the man himself was inspired by Western Bulldogs playmaker Caleb Daniel. The Demons knew of Bowey’s agility, clean hands and booming right foot – he had already trained with the Saints – and were told he would be a seamless fit into the selfless culture they were trying to create. They took him with their first selection in the national draft, No.21 overall.

His selfless traits were on show on Friday when he was an important cog in dismantling Geelong, but he had some attention of his own on Sunday when he celebrated his 19th birthday.

Bourke could not be happier with what he has seen from Bowey at half-back, and the pair exchanged text messages on Monday.

“I think with his kicking and decision making, I think it is a really astute coaching move,” Bourke said.

“He is a tough little bugger, he is really competitive, and he played like that with us. He was never overawed by the level or the size of the other boy. He just stepped up and was ready to go.”