Carlos Sainz backed Ferrari teammate Charles Leclerc to win the French Grand Prix from pole position despite having both Red Bull drivers right behind him on the starting grid.

The Spaniard, who played a big part in helping Leclerc to pole by giving him a slipstream “tow” down the straight, can be of no help during the race as he starts from the back due to engine penalties.

“He will have to fight on his own tomorrow against [championship leader] Max [Verstappen] but I believe he can do it,” Sainz told Sky Sports television.

“I think this car in every race we go to is very quick.

Ferrari have won the last two races, Sainz in Britain and Leclerc in Austria, but Ferrari’s bid to win their first title since 2008 has been damaged by unreliability and engine failures. 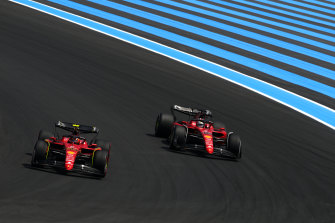 There has been talk of tension in the team, particularly after Leclerc lost out to Sainz at Silverstone on strategy.

“I’m happy that Charles got the pole position, that we are up there as a team,” he said.

“I think we received a lot of criticism this year for the strategy and today just showed we are a very solid team and we get on very well, there’s a very good atmosphere, and we are willing to help each other as much as possible.”

Leclerc thanked Sainz for a gesture that Verstappen also recognised as “a smart thing to do” and looked forward to a race that has only ever been won from pole since it returned to the calendar in 2018.

“I think it will be tricky because the Red Bull guys seem to be very, very quick in the race simulations they’ve done yesterday. So we’ve worked a little bit on the car for the race,” he told reporters.

“Hopefully, it will go better for us tomorrow. But tyre management will be a thing.

“We were good in Austria, we struggled a bit more yesterday, but I think we did a significant step-up in performance since yesterday so hopefully we can show that tomorrow in the race.”