Jimmie Johnson didn’t retire from racing last year; he just retired from NASCAR after 19 seasons in the Cup Series, seven championships and 83 checkered flags. Now, Johnson is about to try something new, something he’s been dreaming about since he was a kid growing up in Southern California.

“IndyCar was the early dream for me,” Johnson told For The Win. “I’m excited. I’m optimistic about it. I’ve got a long way to go.”

He’ll be a 45-year-old rookie in the open-wheeled NTT IndyCar Series, competing in 13 road- and street-course races for Chip Ganassi Racing this season beginning Sunday with the Honda Indy Grand Prix of Alabama at Barber Motorsports Park. And even though the ride has a totally different look, he’s still behind the wheel of a No. 48 car, which veteran IndyCar champ Tony Kanaan will pilot for the oval races.

For The Win recently spoke with Johnson about a variety of subjects, including shifting into IndyCar and the extreme challenges that come with competing in a new style of racing.

This interview has been condensed and edited for clarity. 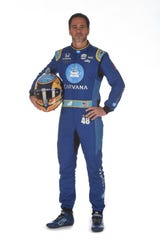 Jimmie Johnson poses in his firesuit ahead of the 2021 IndyCar season. (Photo: Chris Owens via IndyCar)

1. How does it feel to be a 45-year-old rookie competing in IndyCar, something that’s a totally different style of racing than what you’ve been doing for the last couple decades?

Johnson: Definitely a rookie. I can vividly remember the feeling and head space of being a rookie coming into Cup. And it’s very similar – the concerns you have, in your mind, self doubt, the curiosity of what’s ahead. How am I going to do? Where am I weak? Where am I strong? All that stuff’s still very much the same.

But I do feel like being older and more experienced is helpful. And I know I’ve been through this before, and I know I’m going to survive it, regardless of the outcome. Barber is going to be full of surprises. And then they’re rolling to St. Pete, and I’ve never been on a street tire or street track, and that’s gonna be full of surprises. But I’m just gonna roll with it. It’s such a fun car to drive. I can’t describe just how intense and how fun these beasts are to drive, and I love every time I get behind the wheel of one.

2. Can compare how it physically feels for you to drive an open-wheeled car like that versus a stock car?

Johnson: Bristol in qualifying is similar. Dover in qualifying is similar. But in IndyCar, that’s every lap all the time. The intensity is so high because the vehicle’s downforce performance and the weight of the vehicle and the tire – they’re just a far superior vehicle. Then you add in the fact that you don’t have any power-steering assist, and the workload goes up 10 times.