Lewis Hamilton is fighting on two fronts this F1 season

In a career of such consistency, brilliance and unrivalled success, the Emilia Romagna Grand Prix was about as bad as it has got for Lewis Hamilton.

Finishing 13th without any real incident to shift the blame on is bad enough. But the gut punch would have been the enormous gap to his teammate, George Russell, who drove another exemplary race to finish fourth. He now leads Hamilton by 21 points after four races, having beaten him in the past three rounds. 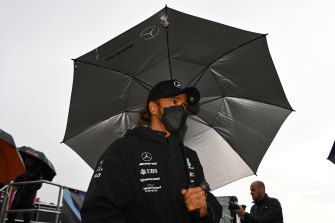 Lewis Hamilton is struggling in his Mercedes this year.Credit:Getty Images

The seven-time champion said sorry for his own performance after the chequered flag. He was lapped by Max Verstappen and spent an eternity stuck behind the AlphaTauri of Pierre Gasly.

There were apologies all round at Mercedes as team principal Toto Wolff apologised for an “undriveable” car.

How bad is it really for Hamilton? Is it too much to say that Russell has outclassed Hamilton this season? Just about.

It is not quite as bad as it seems for the 37-year-old. After beating Russell on Saturday (comfortably) and Sunday (just) in Bahrain, Hamilton was unlucky to finish behind him in Australia after running ahead in the early stages.

But in both of Hamilton’s “better” weekends, Russell was pretty much on the pace of his teammate. In Russell’s better weekends, Hamilton has been distant.

In Jeddah, Russell qualified 10 places ahead and finished 40 seconds up the road. At Imola, Hamilton did not even finish on the same lap as his teammate.

There have been a few instances of bad luck, but at Imola – when Esteban Ocon was unsafely released into his path in the pit-lane and took the position – and Jeddah it only worsened his situation. It was not the cause of it. That he was so far down and embroiled in a midfield battle is partly on him.

Russell has not been faultless, but he has managed to overcome his errors and, importantly, the car’s limitations. The bottom line is that Russell is getting close to the maximum from the W13. Hamilton is not.

How can Russell already have the better of an all-time great?

Before his promotion to Mercedes, Russell spent three seasons at a struggling Williams team. In 2021 he managed to catch headlines with some impressive qualifying performances – especially in the wet at Spa and in Sochi – which earned him the nickname “Mr Saturday” for being able to wring every last hundredth of a second out of substandard machinery over one lap. This year he has translated those skills to the whole weekend.

In 2019 and 2020, though, the Williams was the worst car in the field. Russell says the experience was useful in developing skills he would not have been able to use now had he gone straight into a front-running team.

Although the Mercedes is the third quickest car rather than the 10th fastest, it has significant problems. And Russell is finding a way around them better than his decorated compatriot. For all of Hamilton’s recent success, he has rarely required the skills Russell developed at Williams. The dominance of Mercedes since 2014 has been near-absolute. Even at points last year when Red Bull were quicker, Mercedes had a sound car. This year there are fundamental problems.

Hamilton clearly has used his skills to turn a fast car into an even faster one, but that is a different task. In Saudi Arabia a set-up dead end meant he was eliminated in Q1 for the first time since 2017 – and that was repeated at Imola. This all underlines Russell’s excellence as much as Hamilton’s woes.

What does this mean for the rest of the season?

As well as Russell has done, it would be a shock if the gap continued to grow. And as good as Russell’s race was on Sunday, he qualified only 0.3 of a second ahead of Hamilton and finished five seconds ahead of him in Saturday’s sprint. Mercedes are yet to develop their way to a car that is easier to drive or find an optimal set-up to minimise their problems. Given the huge amount of data, it is perhaps odd to say their situation is akin to scrambling around in the dark, but that is how it appears.

It would be odd if Mercedes made no further inroads into the leaders this year, but it is not impossible. Both championships already look out of the question, so why waste resources on this year’s car when you can look to 2023?

As long as these fundamental issues (namely the porpoising or bouncing on the straights) persist, there is a greater chance of a performance gap between their drivers. There will likely be times where Russell struggles compared to Hamilton.

Hamilton is now fighting on two fronts. One, with a problematic car and two with a teammate who is as talented and quick as anyone he has lined up against for almost a decade.

It is not a crisis, but it is slightly uncomfortable. We should expect him to recover, but the scale of that recovery is uncertain.