What we learned from the inaugural Miami Grand Prix

Red Bull’s straight line speed could be title-deciding, the US finds its answer to Monaco (but at what cost?) – and should Lewis Hamilton take a leaf out of George Russell’s bold approach? Eight things we learned from the inaugural Miami Grand Prix

Formula One’s first visit stateside this season came with its highly-anticipated gem of a race in Miami over the weekend in race five of 2022.

Amid all the razzmatazz which proceeded the Grand Prix, Max Verstappen cranked up the World Championship stakes by overtaking both Ferraris within 10 laps to take first place, a position he kept until the chequered flag to cut the gap to Charles Leclerc at the top to 19 points.

With plenty of action over the week both on and off track, Sportsmail takes a look at what we learned from the inaugural Miami Grand Prix at Miami Gardens, the 11th different venue to host an F1 race in the US. 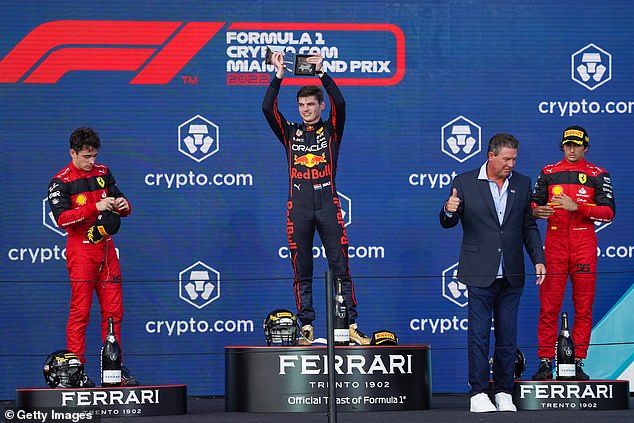 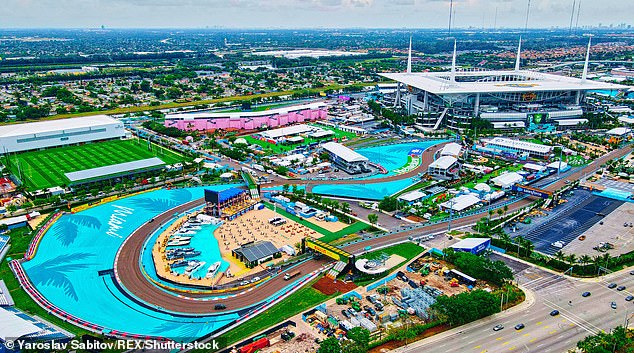 It was Formula One’s first visit to Miami, on a street-circuit surrounded by glitz and glamour

The 2022 Red Bull-Ferrari tussle, chapter five. Out of all the races so far this season, this was the most nip-and-tuck battle between this year’s behemoths over the course of the weekend.

Red Bull struggled in practice on Friday with the reliability of the car, giving their world champion Verstappen minimum time on a fresh circuit.

And come Saturday and qualifying, it showed. The Dutchman made an error on his second run in Q3, with a blunt ‘f***ed it’ team radio remark illustrating so, leaving the Ferraris locked out on the front row.

In essence, the Prancing Horse title contenders – spearheaded by Leclerc – are stronger in the twisty corners with high downforce while Red Bull have more pace down the straights with low downforce. So, which would prove more favourable come race day at 2022’s only new circuit?

Verstappen gained a place straight away as he spotted a gap round the outside of Carlos Sainz into turn one – and then the true hunt was on. 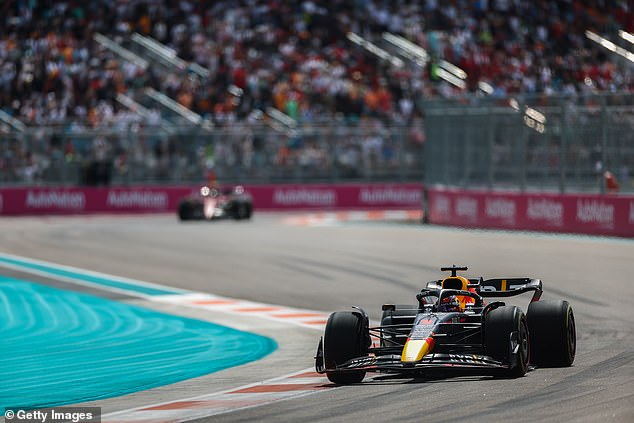 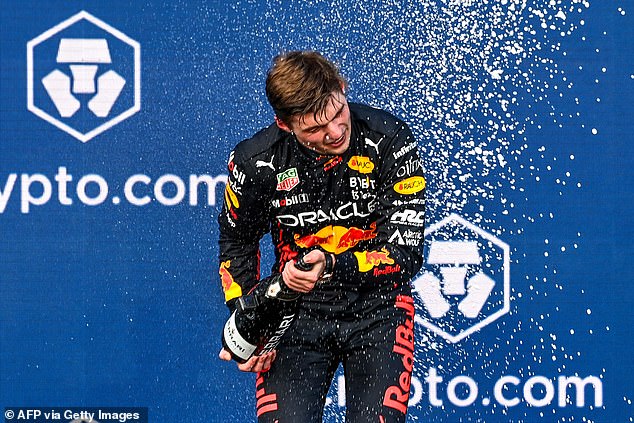 Biding his time, he nipped down the inside of Leclerc down the home straight on lap nine and held on until the chequered flag, as he maturely saw off Leclerc’s second wind following a safety car which bunched up the pack late on.

The triumph in the Floridan heat and humidity maintains Verstappen’s record of winning every race he’s finished this year. Food for thought for the men in red heading into Barcelona in two weeks’ time.

Five races in to his Mercedes adventure, George Russell is showing no signs of race ineptitude or inexperience. In fact, contrary to being in the shadows of his seven-time world champion team-mate, the 23-year-old is thriving with a stronger set of wheels beneath him.

For the fourth time this season, Russell finished above Lewis Hamilton. Sure, luck was again on his side – but if you don’t buy a ticket, you don’t win the raffle.

Russell is certainly buying a few tickets with the Silver Arrows. After favourable circumstances in Australia and Italy, his weekend overall in Miami was topsy-turvy – from P1 in second practice on Friday to failing to get into Q3 on Saturday, starting the race 12th on the grid. 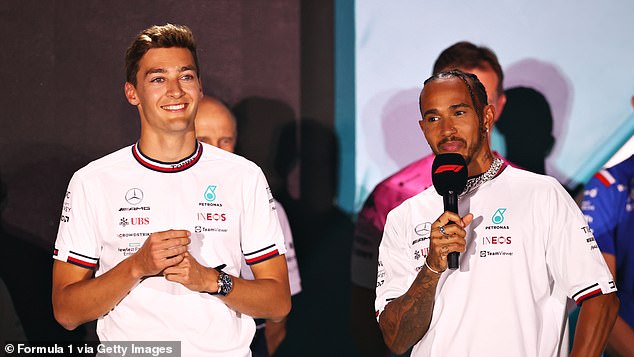 After qualifying, a typically forthright Russell looked short on answers: ‘We saw yesterday, we were really quick, and it’s just massively gone away from us today. And I don’t really know why. It’s not really making a lot of sense at the moment.’

Yet in Albon-esque fashion, he played the long game. Starting on hard compound tyres, an early lack of pace which saw him drop three places was tallied up with maintaining position-on-track; as his rivals around him pitted, he stayed out.

Banking his chances on a safety car, his luck was in when Lando Norris’ crash on lap 41 allowed him to pit under yellow flags, leaving him in sixth place. 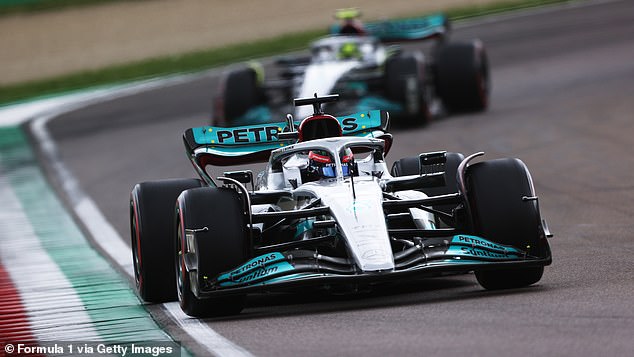 With fresh rubber behind his team-mate, an initial foray past Hamilton was hasty as he overtook off-track but after giving the position back, he made no mistake a second time round as he cruised past his compatriot, a sitting duck on the back straight.

He finished fifth, the best of the rest behind Red Bull and Ferrari – and is now 23 points ahead of his stricken team-mate.

…AND COULD HAMILTON TAKE A LEAF OUT OF RUSSELL’S BOOK?

Another frustrating week for the seven-time champion, in a city where he was undoubtedly the star of the show.

Hamilton is a hit stateside, illustrated by his appearance on Good Morning America last week and a day of golf with NFL legend Tom Brady.

A photo alongside Brady, David Beckham and Michael Jordan pre-race told you the esteemed company he was in. 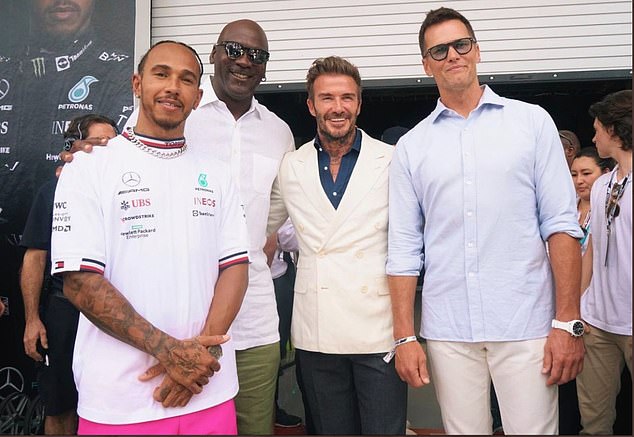 Yet the off-track notoriety was just about as good as it got for the 37-year-old, continually hampered by an off-the-pace Mercedes.

Of course, off-the-pace for the Silver Arrows means off-the-leading-pace. Hamilton still has the third best car overall, but they’re a second down on their Championship rivals per lap.

Qualifying on Saturday was solid – though disappointing given Friday’s improved practice – as he finished sixth, yet the irony was palpable as he sat alongside ex-team-mate Valtteri Bottas at Alfa Romeo in fifth.

Come the Grand Prix though, he was stunted by a poor start costing him two places. Yet when he leapt back up to his starting position, plus-one, the safety car presented Hamilton with an opportunity to gamble. Pit, switch to fresher tyres, and back yourself to make up some places.

Yet amid annoyance at his team for leaving the decision up to him – ‘don’t make me make the decision!’ he bellowed to engineer Peter Bonnington over the radio – Hamilton played safe, insisting he didn’t want to lose his position to Russell.

Regardless, the young star overtook him. Having erred on the side of caution similarly at Imola, it’d be worth Hamilton taking a punt more often than not, especially given how far down the Championship leaderboard he is. 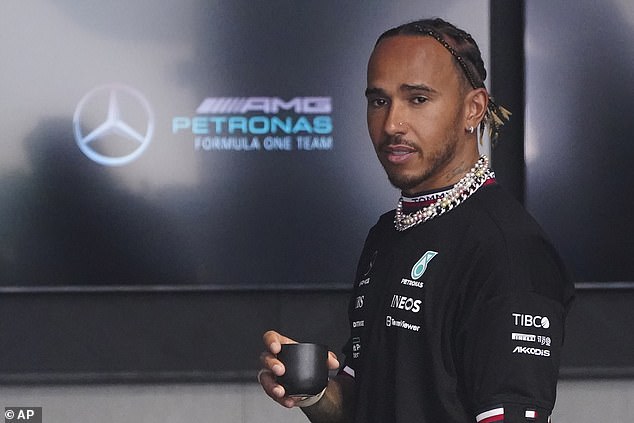 On a separate note, the jewellery saga continues to rumble on, with the FIA standing firm and ordering Hamilton to remove his nose piercing by Monaco at the end of the month.

Hamilton has already insisted he won’t be removing anything. Who will blink first?

THERE’S THE TOP-THREE – AND THEN THE REST

Two weeks ago at Imola, Norris’ podium place gave hope that McLaren had rediscovered their mojo after an underwhelming start to the season.

Yet all that momentum and feel-good factor quickly evaporated in Miami.

Daniel Ricciardo – on a weekend where he equaled Mark Webber’s record for the most Grands Prix by an Australian driver – qualified 14th and finished outside the points in 13th. 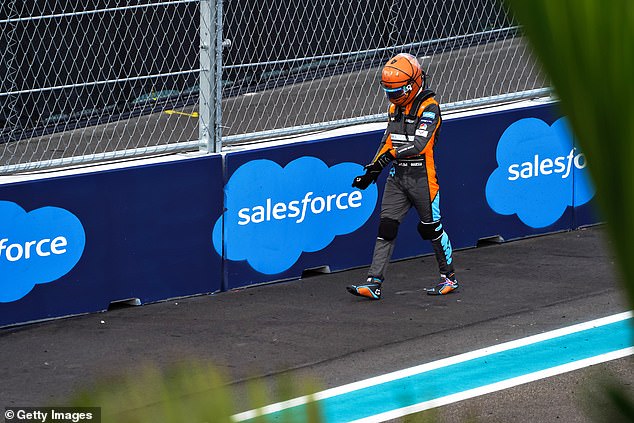 As for Norris, he pushed slightly too hard as he looked to overtake Pierre Gasly with 16 laps remaining, crashing out.

Back to the drawing board for the Woking-based team.

IS ALBON A ‘DRIVER OF THE YEAR SO FAR’ CONTENDER?

Relishing a return to the grid in 2022 is Alex Albon, who is fully maximising the potential out of his Williams car which is, quite possibly, the least powerful on the gird.

After his heroics in Melbourne when he nicked a point having only pitted one lap before the end of the race, he performed similar this time round as he took home two points. 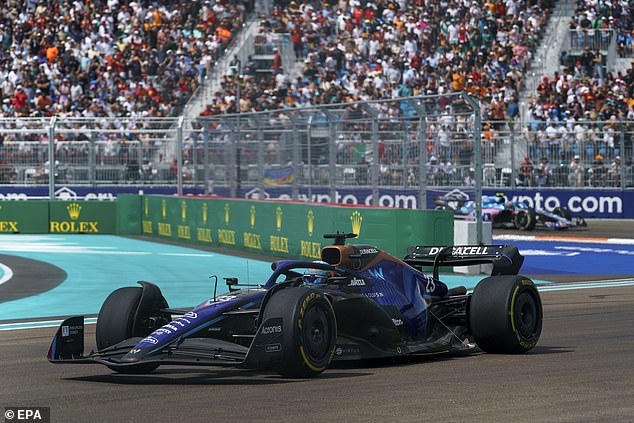 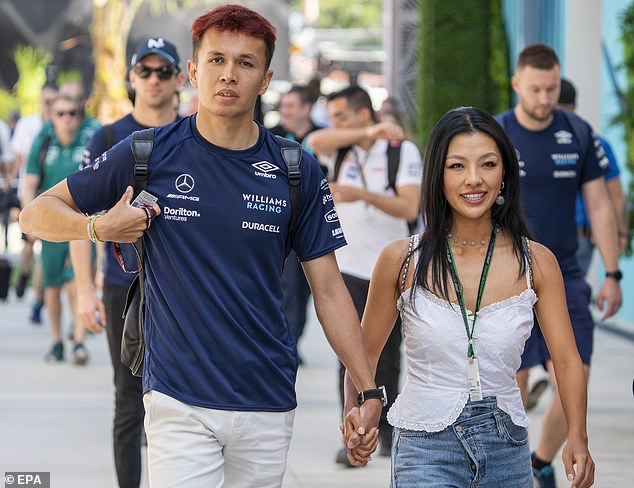 Albon finished ninth, from a spot at 18th on the grid, after Fernando Alonso’s time penalty

This time, he improved eight places on his grid slot, reaching the chequered flag in 10th place.

A five-second time penalty dished out to Fernando Alonso bumped that up to ninth. That red hair of his is a lucky charm; he’d be wise to keep it for the return to Europe.

SO CLOSE YET SO FAR FOR MICK…

Twenty-seven Grand Prix weekends… and still no points for Mick Schumacher in Formula One.

It’s perhaps harsh to signal the likeable son of all-time great Michael out, given for 22 of those 27 races he was in, by far, the worst car on the grid in the 2021 Haas.

Yet the Ferrari-powered team have shown, especially with Kevin Magnussen’s fifth-placed finish in Bahrain, that this year’s model has potential. 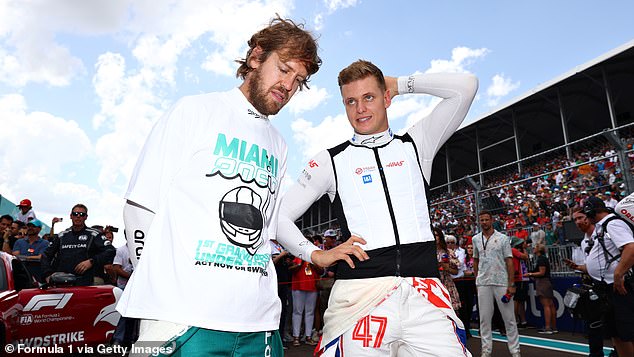 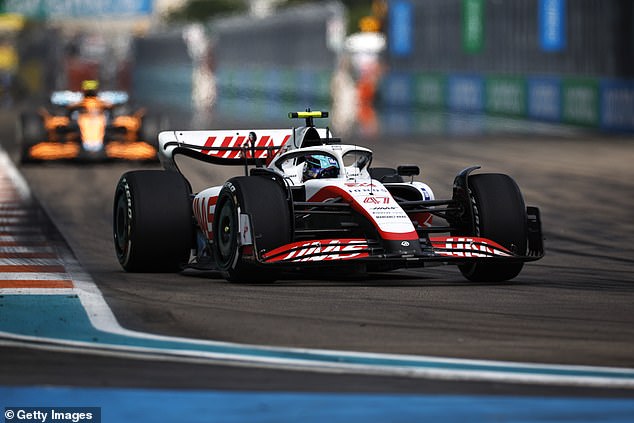 Running for the majority of the race in 10th, the 23-year-old collided with Sebastian Vettel on turn one with just three laps remaining.

A damaged wing meant he had to pit  – and so his points opportunity passed him by.

Don’t worry though, Mick. You’ll have to go some to beat the record for the most races without scoring a point, which goes to Italian Luca Badoer at a mammoth 51.

THE US HAS FOUND ITS MONACO – BUT AT WHAT COST?

Did you see them all? A former First Lady, American sporting greats… James Corden?

If you missed a celebrity across the weekend, don’t be surprised. Dozens flocked to the Miami International Autodrome to see America’s newest sporting event.

Eight-two thousand fans packed out the grandstands too, with a weekend ticket costing £875. 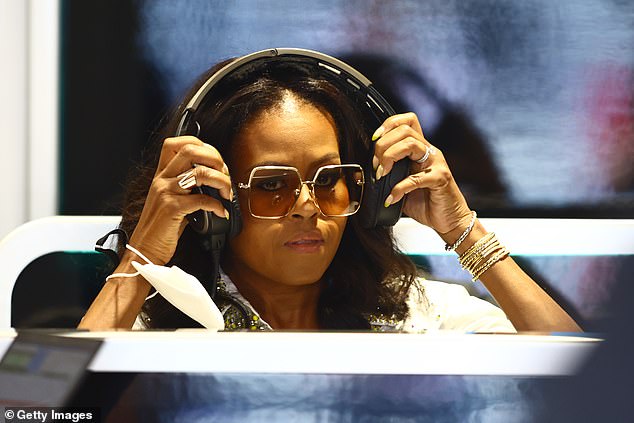 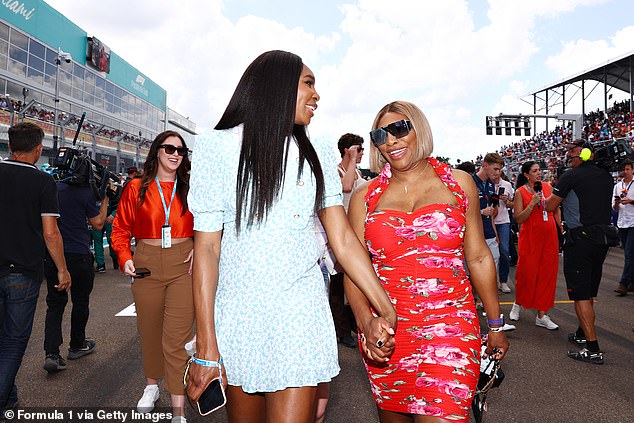 There is no doubt the US has found its glitz and glamour alternative to Monaco. They even squeezed in an ‘Opening Party’ on Wednesday with bright lights and music, parading the drivers and team principals on the main stage. However, two points to raise here.

First, is the stardom off track distracting from the racing on track? A street circuit with a manmade design often relies on yellow flags to lighten things up and, even with Sunday’s late crash, the Grand Prix wasn’t one to set races pulsing. Given a 10-year deal has been signed, there’s certainly lessons to learn in terms of track design.

And secondly, how long will Miami actually have its American spotlight? Next year, Las Vegas will hold a Saturday night primetime race around Thanksgiving. Good luck competing with that.

P.S. WHY WE ALL LOVE BRUNDLE…

Regular observers of the pre-race coverage on Sky – or BBC and ITV in the noughties – will be familiar with Martin Brundle’s famed gridwalks.

Sunday’s was always going to throw up some bombshell guests. And so it proved with David Beckham, DJ Khaled and Pharrell Williams among the stars to appear. 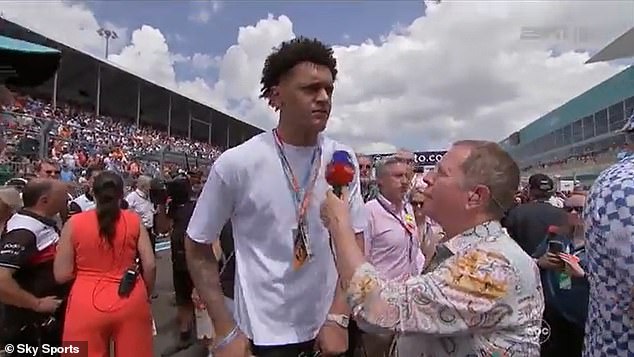 Not Patrick Mahomes though. Brundle, in an honest mistake, confused the NFL star with up-and-coming basketballer Paolo Banchero, to much amusement online.

Brundle himself responded after the race by saying he has never watched back his grid walks over 25 years and ‘dislikes’ doing them.

Let’s hope one single mix-up doesn’t deter Brundle from entertaining petrol-heads pre-race down the line. The grid walks are an iconic aspect of the build-up to races in the UK and Sky will not want to lose them, or him.