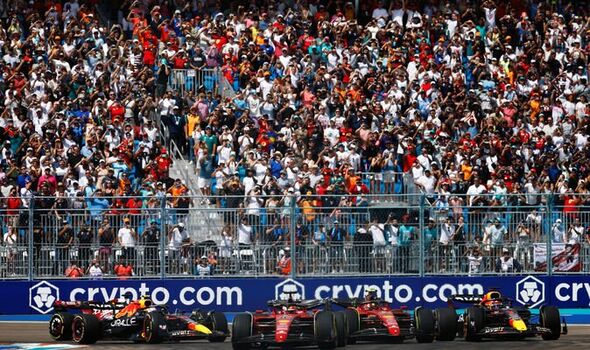 Many wealthy sponsors will not return to the Miami Grand Prix after dubbing the event a ‘s**t show’, according to reports. The inaugural Miami race, won by reigning world champion Max Verstappen, received a mixed reaction from insiders and fans.

Some high-profile guests were apparently unhappy with the services provided in the Paddock Club, which is run locally rather than by the normal F1 organisers. Tickets for the area cost around £10,500 ($13,000) and high-profile guests expect world-class accommodation.

Meanwhile, others hit out at scenes deemed to have been Americanised. Viewers watched on with bemusement as the top-three finishers were escorted to the podium by police motorbikes before being forced to wear American football helmets on the podium.

Former Formula One chief Bernie Ecclestone slammed his successors, Liberty Media, for creating “Formula One: American Style”. Liberty Media CEO Greg Maffei hit back: “Bernie can mouth off all he wants. But the reality is everybody wants in now.”

However, some wealthy backers have apparently insisted that they will not return. F1 journalist Adam Cooper claims some sources branded the Grand Prix a “s**t show” and will refuse to attend future Miami Grands Prix having been left displeased by the quality of the expensive accommodation.

It will come as bad news to Miami GP chiefs, who last year signed a 10-year deal to host the event. It comes amid a concerted effort to raise the profile of F1 in America.

“We always said the U.S. is a very important area in which we need to develop our business,” F1 chief executive Stefano Domenicali said upon the agreement of the Miami deal last year.

“There is a lot of opportunity and having two U.S. races in the U.S. means we have taken the right direction for our strategy for the future. We will keep them separate in order to give the right space to both.

“We are looking ahead, we are putting the foundations for an incredible future for Formula One. This is a milestone that we all wanted.”

Mercedes team principal Toto Wolff appeared to agree that organisers had done a good job. The Austrian said of the event: “The city (Miami) is hyped – is that how you say it? Formula One is all around, the amount of guest requests we have is amazing. I think we’ve finally landed in North America.”

It also comes after F1 agreed to add a third American event from the start of the 2023 season. Las Vegas will now be added to an increasingly busier calendar.