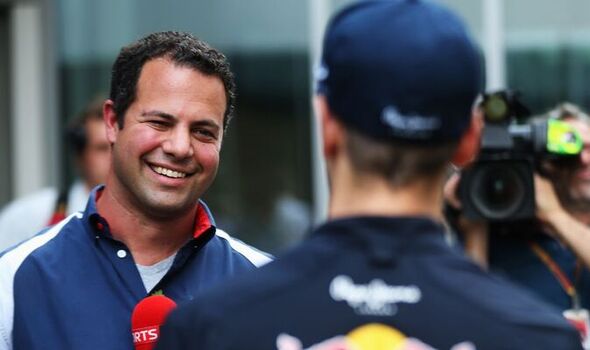 F1 fans are split on whether Max Verstappen and Red Bull were right to boycott Sky Sports at the Mexico Grand Prix as the broadcaster looks to rebuild relations with the recently-crowned world champion. The Dutchman was left frustrated by a series of comments made by pit-lane reporter Ted Kravitz at the United States Grand Prix, in which he appeared to question the integrity of Verstappen’s 2021 title.

The spark that lit the controversy came when Kravitz appeared to sympathise with Hamilton after Verstappen reigned supreme in Texas after overtaking his rival with five laps to go.

The 48-year-old said: “[Hamilton] doesn’t win a race all year, and then finally comes back at a track where he could win the first race all year, battling the same guy who won the race he was robbed in the previous year, and manages to finish ahead of him.

“What a script and a story that would have been. But that’s not the way the script turned out today, was it?

“Because the guy that beat him after being robbed actually overtook him, because he’s got a quicker car, because of engineering and Formula 1 and design, and pretty much because of [Adrian Newey, Red Bull’s Chief Technical Officer] over there.”

The idea that Hamilton was ‘robbed’ of the 2021 championship did not sit well with Verstappen or Red Bull – particularly after they were charged with breaching the F1 budget cap.

Kravitz further soured relations when he claimed Verstappen was seemingly incapable of winning a championship ‘in a normal way’ following the budget cap controversy which had dominated recent headlines.

He said: “Verstappen is around the [Austin] paddock, he seems very happy with himself. He doesn’t seem to be a driver capable of winning a championship in a normal way.”

Express Sport readers have now voted on the saga and 50.7 per cent of our 20,000 responses stated that Verstappen and his team were right to snub Sky Sports.

Verstappen’s father Joshua was also believed to be outraged by the comments, also snubbing the broadcaster at the Autodromo Hermanos Rodriguez Circuit.

The boycott also had an impact on Sky’s German and Italian channels – meaning it was significantly detrimental to their coverage.

According to reports, Sky Sports directors Jonathan Licht and Billy McGinty are said to have held formal discussions with Red Bull over the events in a bid to smooth over relations.

Red Bull are now set to end the boycott in Brazil after drawing a line in the sand over the ‘disrespectful’ coverage.

They had previously described the comment from Kravitz as “the straw that broke the camel’s back.”

Christian Horner had also been public with his backing of Verstappen but the boycott now appears to have been a ‘one and done’ deal.