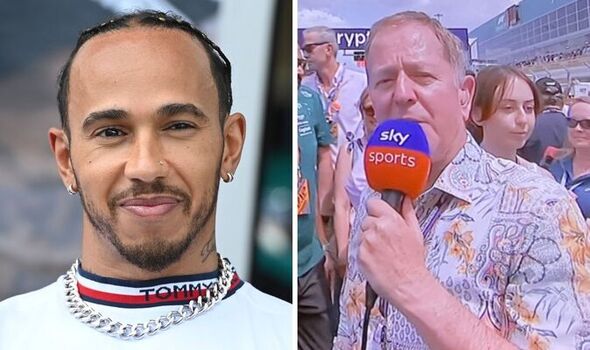 Martin Brundle has disagreed with Lewis Hamilton’s view on a controversial corner at the Miami Grand Prix, insisting the “tight chicane” was good for television. The inaugural Miami Grand Prix proved a huge hit in America with around quarter of a million spectators in attendance over the weekend.

Drivers had just a few days to familiarise themselves with the new track around the outside of the Miami Dolphins’ Hard Rock Stadium. And there were several corners which caught drivers out during free practice as they tested their limits.

The chicane at Turn 14/15 proved to be most troublesome for many and Hamilton was one of several drivers to speak out about the corners. Hamilton said the elevated chicane reminded him of “being in a B&Q car park” and asked for race organisers to remove it in the future.

Max Verstappen, who won Sunday’s race, also took aim at the chicane, insisting he was almost “knocked out” at one point. He said: “The kerb combination, I remember in the four laps I did on Friday, I almost knocked myself out because I hit the first kerb and your head just bounces from left to right at least five or six times.

“It’s really bad if you take just a tiny bit too much because the cars are so wide, so long, so stiff and super-heavy that the little kerb that there is…it’s just not made for it, to be honest.”

Other than that tight chicane, most drivers walked away from the weekend praising the first race in Miami. Brundle too felt the entire spectacle proved to be a huge success, and even disagreed with Hamilton and Verstappen on the chicane.

“I think the Miami event team and F1 did a really great job with the track especially given the confines and a rather dull canvas of a car park to work with,” Brundle wrote in his Sky Sports column. “Other than a big championship showdown race I’ve never experienced so much hype and excitement around a Grand Prix.

“The track surface was taking a pounding and despite turn 17 looking like a patchwork quilt thankfully, along with copious sweeping, it stood up to the tractive forces of 20 modern day F1 cars. Lewis Hamilton and others felt the tight chicane at T14/15 was too much but televisually I liked it, and it was a differentiator for car and driver.

“Without doubt the outside wall at T11 needs considerably more protection as Esteban Ocon and Carlos Sainz found out to their and their team’s cost. I never really understand how those problems materialise, as a driver you can walk, cycle, or scooter round a track once and immediately see the problem areas as if they have flashing red lights on them.”