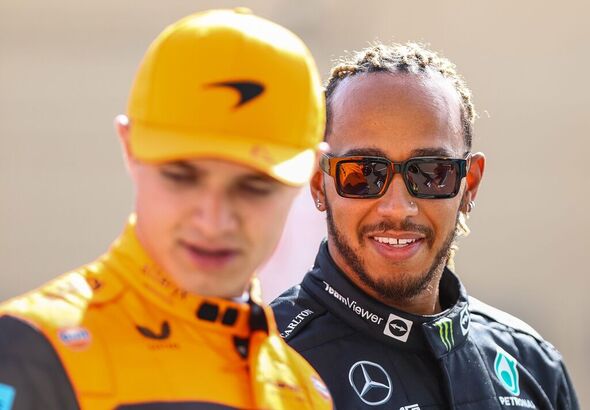 Lewis Hamilton and Lando Norris have been tipped to become embroiled in a driver merry-go-round by former Ferrari team manager Peter Windsor. Speculation over the future of both drivers continues to surface, despite Hamilton seemingly being on the brink of another extension on his current deal at Mercedes, although the Silver Arrows have denied a mega money agreement has already been reached.

Norris meanwhile, appeared to commit his long-term future to McLaren at the start of last year, penning a lucrative deal that runs until the end of 2025. Upon signing, he voiced his intention to challenge for the F1 title with the British team.

But despite being tipped to be in the frame in 2022, it turned into a disappointing season for both the 23-year-old and his team. A third placed finish in Emilia Romagna represented his only podium, and he was eventually seventh in the standings on 122 points.

Indeed, Norris is still searching for his maiden Grand Prix victory, and McLaren have been rocked this winter by the departure of Team Principal Andreas Seidl. And now Windsor, who also worked at Williams, thinks that Hamilton may be involved in Ferrari trying to sign Norris.

“Let’s say Lewis stops at the end of ‘24 – let’s say ’23 and see how we go – I would imagine Toto is going to try and go for Charles Leclerc,” he said during his Twitch stream. “It would be a mess probably, putting Leclerc with Russell, but if he’s prepared to put Russell with Hamilton, he’s obviously going to be prepared to put him with Charles Leclerc.

“Let’s assume Leclerc went from Ferrari to Mercedes to replace Lewis, which is not a completely stupid assumption, what then would Ferrari do? I think they would go massively all out to get Lando. And I think Lando at that point would find it quite hard to say no, putting aside all the contractual stuff because I do think that at that level, they can afford to [buy a driver out of their contract].”

And Windsor thinks a move to the Scuderia would benefit the ambitions of Norris: “I think Lando has got half a chance at Ferrari, if Leclerc goes somewhere to replace Lewis,” he added. “Which would be good, wouldn’t it?”

This week, Norris appeared to sound a warning to his bosses, arguing the team need “do a better job with making a better car” this season. CEO Zak Brown has already conceded it may take until 2024 for McLaren to reach parity with the front runners.