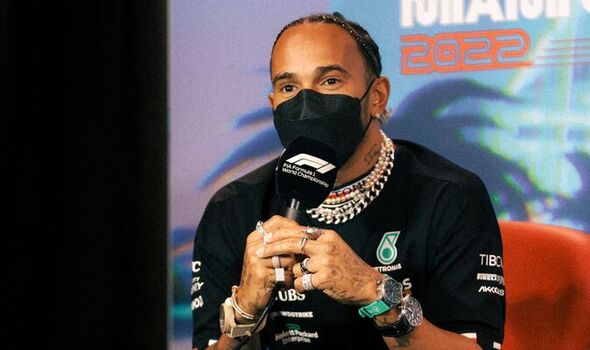 Lewis Hamilton has suggested that he could decide to skip this weekend’s Miami Grand Prix if he is ordered to remove his jewellery in order to take part. The 37-year-old looks to be on a collision course with the FIA due to the governing body’s clampdown on drivers wearing watches, necklaces, earrings and other accessories when behind the wheel.

Hamilton appeared to be making a point over his stance on the matter when he arrived at Friday’s press conference sporting three watches, eight rings and four necklaces. He went on to suggest that he could skip this weekend’s inaugural Grand Prix on the streets of Miami if the FIA decide to insist that he either removes his jewellery or does not race.

“We have a spare driver,” replied Hamilton when quizzed on the possibility of boycotting the on-track action over the coming days. “There’s lots to do in the city, I’ll be good either way.”

Hamilton is not the only driver on the F1 grid to wear jewellery on a regular basis but is certainly the most high-profile and it has been suggested by many onlookers that he is being specifically targeted by the FIA’s hardline view on the topic. A letter was sent to all 10 teams on Thursday night to insist that checks could be carried out before each session to ensure that no earrings or necklaces are being worn by any driver while on track.

The FIA’s firm stance with regards to the situation appears to have done little to deter Hamilton, though, who has continued to race with two earrings and a nose stud for the entirety of the season to date. He recently explained that he is reluctant to comply in order to remain authentic to his true self before suggesting that it would be difficult to physically remove the accessories from his ears even if he wanted to.

“They are personal things,” said the Brit earlier this year. “You should be able to be who you are. There is stuff that I cannot move, I literally cannot even take these out. These ones on my right ear are welded in so I would have to get it chopped off, they will be staying.”