Lewis Hamilton may have comfortably won a fourth consecutive F1 World Championship last season with Valtteri Bottas struggling to keep pace with him, but the British racing superstar made it clear at the Bahrain Grand Prix how he felt about the competition from his team-mate. Mercedes were forced into making a switch at the end of the 2016 season when Nico Rosberg surprisingly announced his retirement from the sport having won his first world title.

A number of drivers had already signed up for the 2017 season but Mercedes decided to swoop in for Bottas after seeing him impress with Williams.

And it’s been a great partnership in terms of Mercedes as they’ve won a record seven Constructors’ Championships in a row.

But the pairing has been fairly one sided since Bottas’ arrival with Hamilton finishing comfortably ahead of his team-mate in each of the last four seasons.

The 2020 campaign saw Hamilton finish 124 points ahead of Bottas and Max Verstappen almost stole second in the standings. 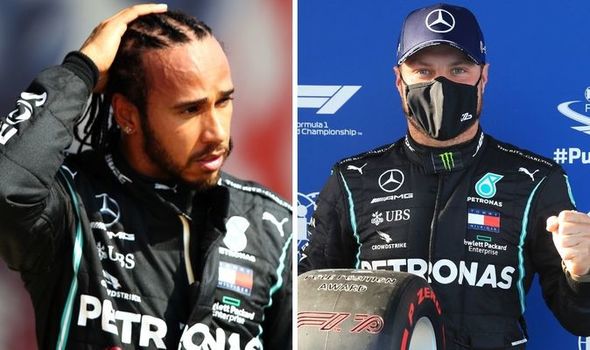 Bottas is coming under increasing pressure to close the gap this upcoming season after George Russell impressed for Mercedes at the Sakhir Grand Prix.

Both Bottas and Russell are out of contract at the end of 2021 with Mercedes admitting previously that they want to promote the young Brit in the future.

Whether or not that comes in 2022 remains could all depend on what happens this season and Hamilton has already said he expects a close battle with Bottas.

Speaking at the Bahrain Grand Prix back in November, Hamilton said: “I think Valtteri… is getting stronger and stronger each year.

“The media have commented on the [Bottas] 2.0 etc, and every year you can see him just grafting away and chipping away at trying to raise the bar in so many different areas.

“And you’ve seen this year, I think, whilst the points gap now is where it is, if you look at a lot of qualifying, it was the smallest of margins.

“So closing the gap in qualifying he has done already, which has made it quite challenging.

“In race trim, naturally, you can see obviously the consistency that I’ve had this year has [been] really what’s made the difference. But if you look on the race weekends, it was so close. 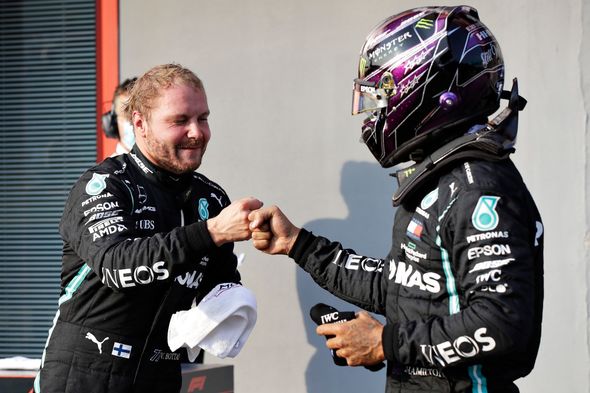 “Of course there’s a points gap of seven points [between P1 and P2] and that consistently over a period of time [adds up].

“Valtteri has also been unfortunate this year with the reliability issues, so it makes it [the points gap] look even bigger than it is.”

Hamilton’s future remains undecided with the 35-year-old currently out of contract with Mercedes with just weeks before teams begin unveiling their liveries for the 2021 season.

But Express Sport understands Mercedes remain confident that a new contract will be signed in the near future.