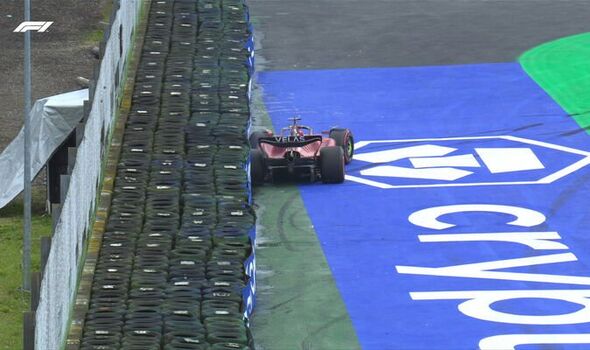 Leclerc was lying in third behind the Red Bull of Sergio Perez but was closing on his fresh soft tyres. In an attempt to hunt down the Mexican, Leclerc took too much kerb into the entrance of the Varianta Alta which chucked his car sideways into the wall.

It initially appeared like Leclerc had suffered terminal damage but only needed a wing change. He returned to the track in ninth place but threw away an almost guaranteed 15 points.

Leclerc was running comfortably behind Perez with around ten laps remaining but was the first to pit for fresh softs in a bid to put pressure on the Red Bull’s and attempt the fastest lap. He was followed by Perez and Max Verstappen a lap later but Leclerc was able to close the gap slightly.

Leclerc’s crash came just a couple of laps after his stop which meant his massive gap to fourth was greatly reduced. It meant he dropped further down the field than he would have done had he crashed before his stop.

After the incident Leclerc asked whether his car had any further damage but was reassured he was still able to push. In the closing stages, he managed to pass Kevin Magnussen, Sebastian Vettel and Yuki Tsunoda to secure sixth.

It was a day to forget for Ferrari after Carlos Sainz crashed out on the opening lap of the race.