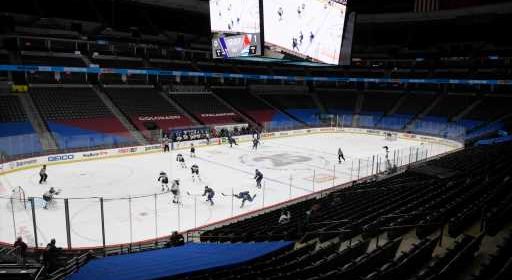 The stalemate has gotten worse for Avalanche and Nuggets fans. Many still cannot regularly watch their team on television, and now all home games at Ball Arena are played before empty seats.

There does not appear to be an end in sight to the 17-month long impasse, either, with no new developments in negotiations, according to Ken Miller, Altitude’s executive vice president and executive producer.

In the case of the Avalanche, Altitude is scheduled to exclusively broadcast 50 of 56 games this season, with NBC Sports carrying the other six.

Altitude’s previous contracts with DirecTV, Comcast and Dish expired within a week of each other in August 2019. DirecTV reached an agreement to re-launch with Altitude on Oct. 31, 2019, but the other two remain in a stalemate.

“I have Comcast and I’m considering moving to DirecTV,” Avalanche fan John Wegener of Highlands Ranch said. “It is ridiculous. I find it very annoying that these two companies cannot meet in the middle somewhere.”

The Altitude situation is currently at its worst because most restaurants and bars have limited indoor dining service due to Colorado’s recent COVID-19 spike. So the options for Comcast or Dish subscribers are limited.

“Given the way that all sports are hurting and hemorrhaging money, combined with all the rest of us feeling like we’ve been repeatedly clubbed over the head for the past year, if not four years, it seems absurd that these billionaires can’t find a way to throw us a few crumbs while benefiting themselves as well,” Avs fan Cary Wolfson of Boulder said. “We have two potential championship teams that nobody can watch. How is that supposed to build fan loyalty?”

Altitude argues that Comcast’s negotiations “make no economic sense” and are part of a plot to buy or eliminate the RSN. Comcast contends Altitude is conflating a “routine commercial disagreement” with a violation of antitrust laws.

U.S. District Judge William Martinez partially denied Comcast’s request to dismiss the case, per online court records, allowing it to proceed as both sides produce evidence in the discovery phase. Martinez dismissed several Altitude claims within its lawsuit, but he wrote that it “has alleged facts sufficient to show that its allegations of anticompetitive conduct are plausible” against Comcast.

Unofficial Avalanche owner Stan Kroenke (his wife is listed as the club’s owner under KSE) has a 2020 net worth of $8.3 billion, according to Forbes. Brian L. Roberts is the majority owner of Comcast and worth $1.9 billion. And Dish Network chairman Charlie Ergen has a net worth of $9.1 billion on the same Forbes report.

They didn’t create their wealth by making bad business decisions. But can’t they find a way to make a deal that benefits Avalanche and Nuggets fans?

Rider Jensen from Denver is an Avalanche season-ticket holder since the team arrived in Colorado in 1995. He has DirecTV and pays a $40 premium during the NHL season to watch the Avs when they play on the road — and on the rare occasion he doesn’t attend a home game. Jensen said Altitude is not provided on his basic service, but he’s willing to pay the extra charge.

But Jensen still has a beef with Altitude’s inability to find a way to reach Comcast and Dish subscribers. He’s tired of the various Kroenke-led advertisements bashing Comcast and Dish that encourage fans to complain to the providers.

“I’m not looking for a part-time job to protest something, and I’m kind of lucky because I have DirecTV and I can get Altitude,” Jensen said. “But cable is hurting. Streaming is taking over — the Netflix, Hulu. Cable is hurting. I don’t think they can’t afford to pay Altitude what they used to. And if the Avs started their own streaming service, they probably wouldn’t survive.”