Every Elite Eight team has its star player – an All-American or main catalyst who can help carry their respective team to the Final Four. But in a men's NCAA Tournament of bracket-busting upsets and unexpected results, it's been the role players or supporting cast members who have played key parts.

These are the players who could be the difference in playing in April or going home one game short of the Final Four. In 2019, Mamadi Diakite was the unsung hero for eventual national champion Virginia – when his buzzer-beating bucket helped the Cavaliers force overtime and advance past Purdue in the Elite Eight.

Here is a look at seven X-factor players in the men's NCAA Tournament Elite Eight field:

Jaime Jaquez Jr., UCLA. The bruising sophomore guard, who leads the Bruins in rebounding, was the hero in helping lift UCLA past Michigan State with 27 points. The team's third-leading scorer, Jaquez plays with a grit and tenacity that injects energy into his teammates. He came up clutch vs. Alabama, finishing with 17 points – including a step-back three-pointer in overtime

Jarod Lucas, Oregon State. The sophomore guard is the Beavers' second-leading scorer with 13 points per game. He shoots 39% from three-point range and 90% from the free-throw line. His dagger triple with 1:12 left helped Oregon State finalize its upset victory over Loyola-Chicago in the Sweet 16.

L.A. STORY: USC and UCLA are in the Elite Eight together for the first time ever

WHAT YOU SHOULD KNOW: Four takeaways from the Sweet 16 that matter most for the Elite Eight 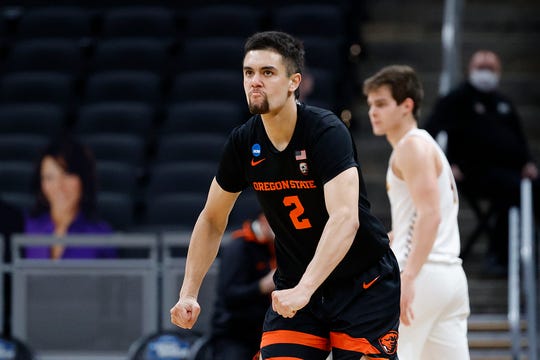 Isaiah White, Southern California. The 6-7 senior guard was a driving force in USC's rout of Oregon in the Sweet 16, finishing with 22 points, five rebounds and three steals. He had 13 points in the Trojans' Round of 32 win over Kansas. White only averages 7.3 points per game as a glue player, but when he does score it's a boost for this team.

Mike Smith, Michigan. The Wolverines' senior point guard has been a key player all season, but his leadership and playmaking have taken an even bigger meaning with second-leading scorer Isaiah Livers out for the whole tournament. Smith had 18 points and 15 assists in a win vs. Maryland on March 12, showing his takeover ability.

Justin Gorham, Houston. The Cougars have a deep backcourt, but Gorham (8.6 ppg, 8.6 rpg, 51% shooting) does the little things in the frontcourt to help Houston win. His 13 points and 10 rebounds came up huge in a Sweet 16 win over Syracuse.

Jalen Tate, Arkansas. The Razorbacks' fourth-leading scorer came up clutch with 22 points, including eight points in the final five minutes, to help Arkansas dispatch Oral Roberts in the Sweet 16. Tate can create for others (3.9 assists per game) or score when it's necessary (averaging 10.9 points a game).

Davion Mitchell, Baylor. While leading scorer Jared Butler was the Bears' first-team All-American, it was Mitchell's penetrating and instant offense that was the difference in Baylor's win over Villanova in the Sweet 16. The junior guard plays with an energy that's contagious to the rest of the team.