NFL Week 17 roundtable: What was your worst preseason prediction, and how did it go wrong?

Predictions are a staple in the world of sports journalism. We all make them. Sometimes we are even correct.

Sports fans have predictions of their own and love to argue with sportswriters. They love it more when they are right, and the sportswriters are wrong.

While we are not in the business of calling out fans for their misguided predictions, we do have to own up to own. And that is precisely what we are asking the USA TODAY NFL staff to do this week in the final NFL Roundtable of the 2020 regular season.

So with that in mind, we ask: What was your worst NFL preseason prediction, and how did it go wrong? 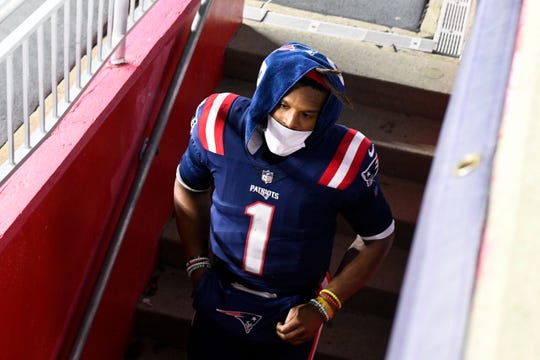 Quarterback Cam Newton and the Patriots figured into a couple of our incorrect predictions for the 2020 NFL season. (Photo: Brian Fluharty, USA TODAY Sports)

Here are their answers:

The Patriots will make the playoffs. I blew that one! Instead of the playoffs, the Patriots (6-9) have notched the franchise’s first losing season since 2000. And they just got blown out on Monday night at The Razor by Buffalo, marking the first time in 20 years they’ve been swept by a division opponent. Yes, I believed enough in the magic of Bill Belichick to think they would still make it to the postseason dance, even though so many challenges piled up in addition to the departure of TB12. I mean, the last time the Patriots played a season without Tom Brady (2008, when he suffered a torn ACL in the season opener), they still won 11 games with Matt Cassel at quarterback … despite becoming the rare 11-5 team to miss the playoffs.

This time, I pegged Buffalo to win the AFC East (done) and for Miami to make a run at the playoffs (doing), yet I thought the fact that this was the year the NFL expanded the playoff pool again would be yet another situation that Belichick could take advantage of. Especially with Cam Newton in the house, determined to prove he is still an elite player (not happening). The “perfect marriage” between Belichick and Newton had the look of another example of a seasoned vet coming to Foxborough and revitalizing his career. And early in the season, it seemed the Belichick trait of deftly crafting a strategy that suits his personnel would result in another feather in his genius cap as they incorporated Newton’s prowess as a runner into the scheme.

What happened? For one thing, New England could no longer be counted on to pull out the close games in crunch time without TB12. Four the Patriots losses were by seven points or fewer. But that was part of a much bigger picture as it is no longer a given (until proved otherwise) that Newton is a “multi-dimensional” threat. The numbers don’t lie: Newton has thrown just five TD passes (10 interceptions), the Pats have the 30th-ranked passing offense and have produced the fifth-fewest points (19.9 a game) in the league. No, it’s not all on Newton floundering as a passer. The Patriots lack targets in the passing game (which hampered Brady, too) and the most reliable one, Julian Edelman, didn’t make it back after suffering a knee injury in Week 7. Then there’s the defense, ravaged by the double whammy of free agent departures and COVID-19 opt-out defections. They’ve tried to hang tough on the back end with (now-injured) shutdown corner Stephone Gilmore, savvy safety Devin McCourty and emerging corner J.C. Jackson, but a 27th-ranked run defense is clearly a reflection of the holes in the font seven. It will be strange to kick off the playoffs without the Patriots. But it’s been strange for New England all season without Brady covering for so many deficiencies. And now it’s Belichick challenged to lead the comeback attempt next season.

No doubt about it, Bears fans, my initial 3-13 projection for Chicago’s 2020 record (later updated to 5-11 before the start of the season) was way off base. How did it go wrong? Well, let’s all of us be honest here, Da Bears benefited from a tremendous amount of luck early on: Lions rookie RB D’Andre Swift dropped an easy game-winning TD pass with seconds left in the opener; Giants RB Saquon Barkley was injured in Chicago’s four-point win the following week; after that, (another) epic collapse by Atlanta; two weeks later, Tom Brady lost track of the downs … though the Bears deserved their one-point defeat of the Bucs. Over the last three weeks, Chicago has put away some very bad teams, climbing into wild-card contention in the process. Still looks pretty much like a 5-11 team to me overall, but what do I know?

My least accurate preseason predictions were wrecked more by injuries than idiocy. I pegged Nick Bosa for defensive player of the year, a difficult award to win with a torn ACL by Week 2. I touted CeeDee Lamb for offensive rookie of the year, not realizing the Cowboys would start four quarterbacks in five weeks. (“I definitely don’t recommend it,” coach Mike McCarthy said Wednesday.) That being said: One month ago, when the Cowboys were 3-9 and gashed for more than 260 rushing yards for the third time this season, I’d have told you my selection of them as NFC East champions was delusional. The Giants upset the Seahawks in Week 13, Washington snapped Pittsburgh’s 11-game win streak the following day and the Eagles turned to quarterback Jalen Hurts for late energy against the Packers. The Cowboys, in contrast, closed a 34-17 loss at Baltimore so poorly that Ravens left tackle Orlando Brown celebrated a score with an “easy money!” jab on national television. Discussions at the Star that week explored effort and finish. Now, the Cowboys are on a three-game win streak and it's not so unrealistic they will win the division. My expectations for how consistent their roster and play style would be were laughably wrong. But thanks to the NFC East’s foibles, my prediction they’d capture the East is not yet dead.

I don’t know which was worse: That the Cowboys would win the NFC East, and the Eagles would make the playoffs as a wild card team, or that Cam Newton would win Comeback Player of the Year. I guess I’ll go with Cam, because as awful as the NFC East has been, Dallas still has a slim chance.

Newton, meanwhile, has had an extremely disappointing season in New England. I really believed he would revive his career with Bill Belichick, and it certainly seemed possible based on his first few outings. But after missing time with COVID-19, Newton never was the same. He has struggled as a passer despite completing 65.4% of his throws (second-best of his career). He isn't going to reach the 3,000-yard mark, has just five touchdown passes compared to 10 interceptions, and the Patriots are having their worst season in 20 years. The only bright spot is Newton has 12 rushing touchdowns. But he's no longer dangerous as a dual-threat quarterback. He hasn't been able to elevate this rag-tag bunch of wide receivers and tight ends the Patriots have. The lack of talent does play a role in Newton's disappointing season, but even individually, he just doesn't look like the same player.