Kiszla: Unless Broncos trade up for quarterback Justin Fields or Trey Lance in NFL draft, they need to move back from No. 9 pick – The Denver Post 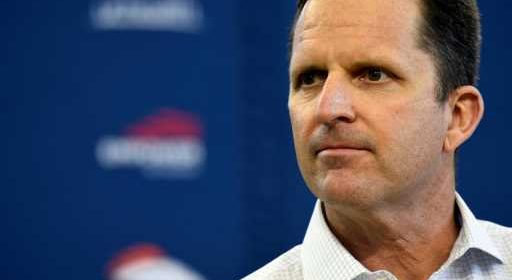 Broncos Country has gone gaga for new general manager George Paton. We were so over John Elway and so ready for a new bromance. Even my curmudgeonly heart went pitter pat when Paton aced free agency.

But the honeymoon is over. Paton has done nothing at quarterback. Unless you’ve been overserved Orange Kool-Aid, the Broncos remain a homely team only a mother could love.

The real work for Paton begins now. While it’s too early to predict his fate, the next 25-30 days will go a long way in determining if he’s the right man to clean up the mess Elway made of this Broncos roster.

With anticipation building for the NFL’s annual festival of irrational hope, with a crazy run on quarterbacks set to begin April 29, when Jacksonville makes Clemson’s Trevor Lawrence the No. 1 pick in this year’s draft, what does Paton need to do?

Denver simply cannot stand pat and wait for the best player available to fall into its lap with the No. 9 overall selection. Paton needs to pull off a major trade in the first round. If he can’t, it’s not only a bad night for the Broncos, but a sign our beautiful bromance with Paton is already in real trouble.

After missing the playoffs five straight seasons, this team requires bold action. Trade up. Or trade down.

But it would be a mistake for Paton to sit back in the Denver war room and watch, as Jacksonville hugs Lawrence, the New York Jets grab Brigham Young quarterback Zach Wilson and San Francisco chooses among Justin Fields, Trey Lance and Mac Jones as its QB of the future.

Our old friends John Lynch and Kyle Shanahan, who somehow got away from Broncos Country, had the guts to trade up into the third slot of the opening round. Did the Niners overpay in deal? Quite possibly. But give them this: Lynch and Shanahan showed the No Plan B aggression that Elway used to talk about.

Based on circumstantial evidence, draftniks have jumped to the conclusion Jones is the Niners’ guy. And Todd McShay is never wrong, right?

Call me a knucklehead, but San Francisco trading a truckload of draft capital to take Jones does not compute. Is Jones a winner and NFL-ready? Yes. Does the mind of Alabama’s fine young QB process football complexities with ease? Yes. Is his arm skill less than stellar? Yes.

Add all the qualities of Jones together, and does Shanahan see the next Tom Brady? I don’t think so.

The NFL of the future will be ruled by quarterbacks with the physical attributes of Fields and Lance, trying to follow the footsteps of Russell Wilson and Patrick Mahomes. I have difficulty seeing how a forward-thinker like Shanahan will reach back to the future for Jones.

If Shanahan does commit the error of taking Jones, it leaves an opening for Paton to wheel and deal for the No. 5 overall pick of the Bengals. Trade up to take Fields or Lance, who both could use a redshirt season as NFL rookies.

Drew Lock is perfectly capable of taking the losses in 2021 while his successor learns the ropes. At season’s end, after the Broncos miss the playoffs, Paton could fire coach Vic Fangio and offensive coordinator Pat Shurmur, then get on with what Elway should have done after Peyton Manning retired: Hire a coaching staff that’s more in tune with the future than the past.

What happens if it proves too daunting a task for Denver to trade up, or Paton isn’t willing to bet his reputation as a talent evaluator on Fields or Lance?

Well, here’s the sobering truth: Should the Broncos fail to land a franchise quarterback in this draft, it’s probably going to be a slow rebuild in Denver, with Paton working to convince the team’s next owner he’s the right general manager for the job.

If this project requires patience, isn’t it obvious Paton should stockpile extra draft picks by trading back from No. 9?

On a Denver roster littered with the holes of a 5-11 team, it doesn’t make much sense for Paton to take Penn State linebacker Micah Parsons or Alabama cornerback Patrick Surtain II with the ninth pick, unless he’s certain they are players with perennial Pro Bowl talent. There’s more value, not to mention additional draft choices at his disposal, if Paton trades back in the first round and targets Alabama running back Najee Harris or Notre Dame linebacker Jeremiah Owusu-Koramoah.

Yes, trades are easier imagined on a leisurely weekend morning in early April than closed under the extreme deadline pressure of draft night.

But if Paton can’t make a deal for the team’s No. 9 pick, he’s doing it wrong.