Kickin’ It with Kiz: Broncos should beg forgiveness from Shaq Barrett and dump Von Miller 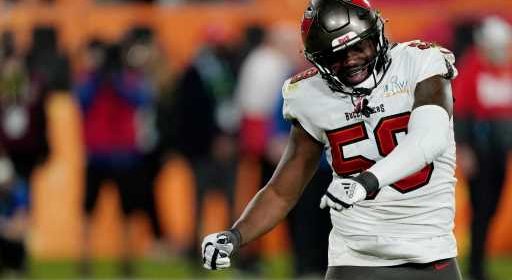 Tampa Bay edge rusher Shaq Barrett is currently better than Von Miller and J.J. Watt combined.  With an injury forcing Miller to miss the entire season, he and Watt combined to produce five sacks during 2020, while Barrett had a dozen sacks in the regular season and playoffs on the Bucs’ run to the Super Bowl. The best ability is availability! We need to bring the Shaq Attack back to Denver and cut loose Miller so he can pursue his television career on the “Sanford and Son” reboot, playing Fred Sanford.

Kiz: The staff here at Kickin’ It Headquarters doesn’t need extensive video analysis determine that one of the worst mistakes John Elway made as general manager was letting Barrett go find another NFL city to become a star. If draft and develop is the mantra of an organization, it was a colossal failure by the Broncos. So what to do now? Well, it’s time to say goodbye to Miller with thanks for everything the Vonster did for Denver. And then beg Barrett for forgiveness, asking him pretty please to return as a free agent. Big bags of money might even make Shaq believe the Broncos are genuinely sorry.

Well, it didn’t take long. After a rare agreement with you about the damage Dick Monfort and Jeff Bridich are doing to the Rockies, you are back to full of (malarkey) with your bashing of Broncos quarterback Drew Lock.

Steve, honest to a fault

Kiz: All great relationships are built on a foundation of honesty. That’s what I like about you, my friend. You don’t always like me. But you can’t quit me.

Watching this weird new TV show, “Resident Alien,” the thought occurred to me: Maybe Tom Brady is an alien. Or maybe he made a pact with the devil. Whatever the reason, I’m sick of Brady and wish he would just retire.

Kiz: There were moments in the NFC championship game, when Brady kept throwing passes to Green Bay defenders, that I began to believe the cyborg wearing No. 12 for Tampa Bay was finally ready for the scrap heap. No such luck. For a long time, I resisted the idea Brady is the GOAT. Now I choose to believe Joe Montana is the best human to ever play quarterback, while Brady is in a class by himself as either a lab creation or a visitor from outer space.

Kiz, please help me understand. If Michael Malone is such a defensive-minded coach, why wasn’t he pounding the table to make sure the Nuggets front office did everything possible to make sure they kept two of his top defensive guys, Jerami Grant and Torrey Craig?

And today’s parting shot is an answer to this question: When the Rockies gather for spring training, what words of encouragement can manager Bud Black possibly offer at the first team meeting?

Everyone in this clubhouse has a chance at a ring. You play well enough, you just might get traded to a team that cares about that.