Damar Hamlin supports his Bills teammates from home during playoffs

‘My heart is with my guys’: Damar Hamlin supports his Bills teammates from home during their AFC wild card matchup as he focuses on his recovery but claims there is ‘nothing he wants more than to be out there with them’

Buffalo Bills safety Damar Hamlin tweeted out his support for his teammates Sunday as he revealed he will be rooting for them on from home.

The 24-year-old will be watching the Bills’ AFC wild card matchup against the Miami Dolphins Sunday from home as he continues to focus on his recovery.

Just 13 days ago, Hamlin suffered cardiac arrest on the field during the Bills’ pivotal Week 17 game against the Cincinnati Bengals. 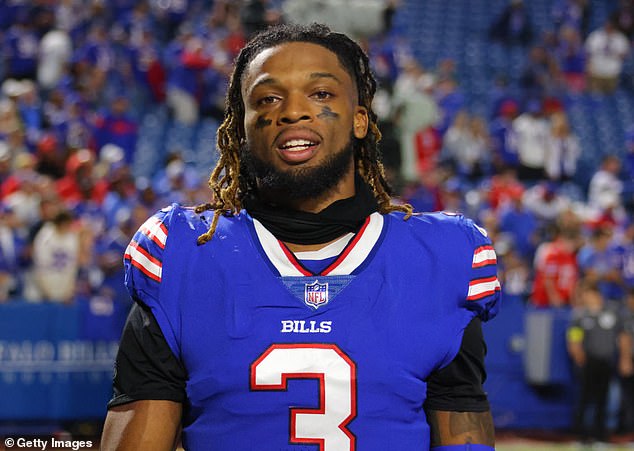 He has made significant progress in his recovery and was released from hospital earlier this week but Hamlin is still taking it easy.

Despite still recovering, Hamlin claimed there was nothing he wants more than to be out with his teammates.

‘My heart is with my guys as they compete today! Supporting from home as I focus on my recovery,’ he tweeted Sunday morning. ‘Nothing I want more than to be out there with them! LFG #BillsMafia.’

It had been speculated earlier on Sunday that he could have attended the playoff game in Orchard Park.

The 24-year-old tweeted Sunday morning, insisting he was focusing on this recovery

However, Hamlin dispelled those rumors as he insisted he needed to focus on his recovery.

Hamlin went into cardiac arrest during a football game against the Cincinnati Bengals and was rushed to the University of Cincinnati Medical Center.

On Monday, Hamlin was transferred to Buffalo General Hospital. Just days ago, he was discharged from BGH and went home to continue his recovery and rehabilitation with the team.

Saturday, Hamlin was reunited with his teammates – with linebacker Matt Milano posting an image of the safety on his Instagram story. 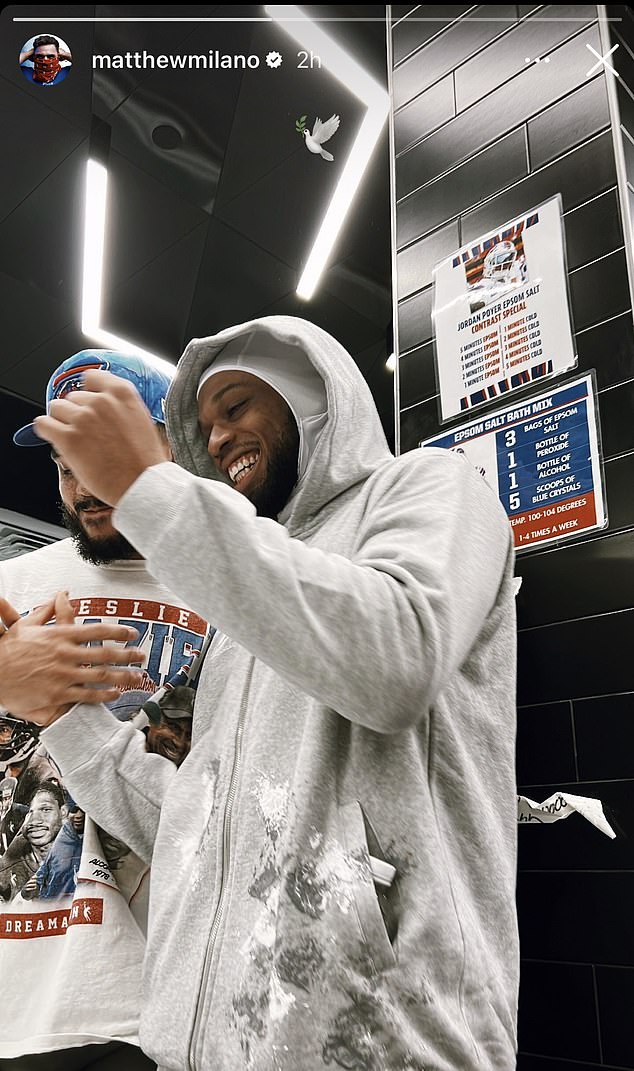 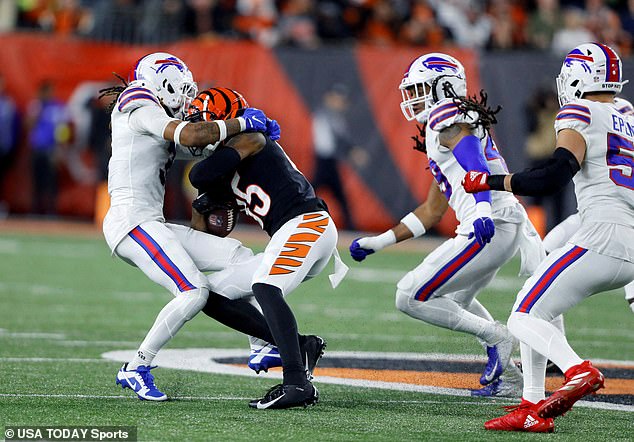 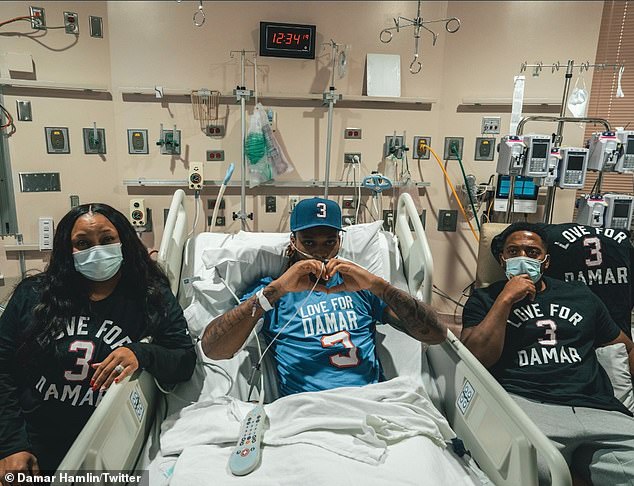 The Bills revealed the good news that the safety had left hospital in a statement on social media Wednesday morning, saying: ‘Damar Hamlin has been discharged from Buffalo General Medical Center/Gates Vascular Institute, a Kaleida Health facility in Buffalo, NY.

‘Hamlin was admitted on Monday and went through a comprehensive medical evaluation as well as a series of cardiac, neurological and vascular testing on Tuesday.

‘Jamie Nadler, MD, critical care physician and Chief Quality Officer at Kaleida Health and the care team lead for Hamlin said, “We have completed a series of tests and evaluations, and in consultation with the team physicians, we are confident that Damar can be safely discharged to continue his rehabilitation at home and with the Bills.’ 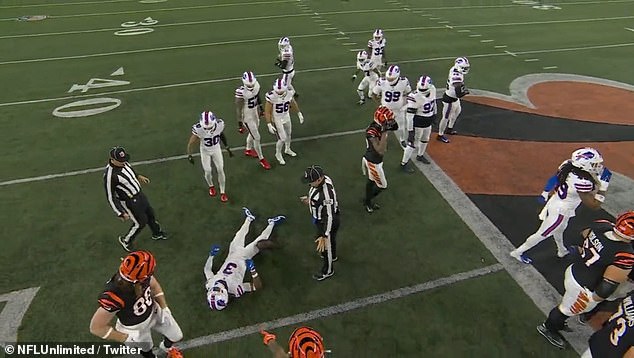 Hamlin provided an update on his progress on Tuesday afternoon, revealing he was undergoing and passing medical tests.

‘Not home quite just yet,’ Hamlin said on his Twitter profile.

‘Still doing and passing a bunch of tests. Special thank you to Buffalo General, it’s been nothing but love since arrival! Keep me in y’all prayers please! #3strong.’

Hamlin was transferred from the University of Cincinnati Medical Center to the facility in Buffalo on Monday.

‘Headed home to Buffalo today with a lot of love on my heart,’ the Bills safety wrote.

‘Watching the world come together around me on Sunday was truly an amazing feeling. The same love you all have shown me is the same love that I plan to put back into the world n more. Bigger than football! 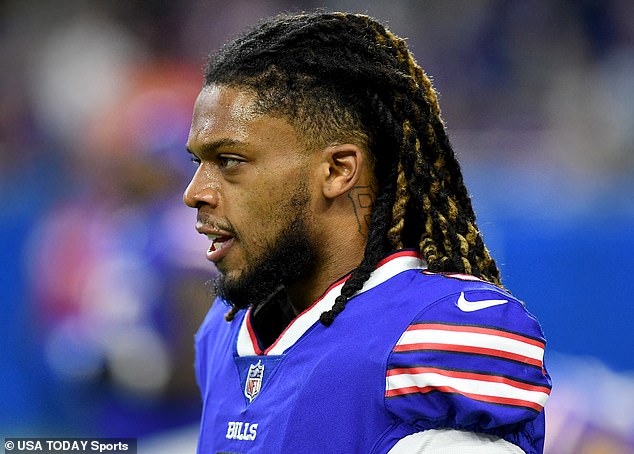 ‘Grateful for the awesome care I received at UCMC. Happy to be back in Buffalo. The docs and nurses at Buffalo General have already made me feel at home!’

To give back to the hospital that saved his life, Hamlin launched a series of t-shirts with proceeds going back to the UC Medical Center.

The Bills player, who has also set up charity toy drives to raise money for his local community, had tackled Bengals receiver Tee Higgins in the first quarter of the pivotal Monday night game on January 2 and got up briefly before falling backwards to the ground and laying motionless.

He was attended to by members of the Bills training staff, including Denny Kellington – who was identified as the man who gave Hamlin necessary CPR.

Higgins led the outpouring of well wishes for the young player, tweeting that he ‘prays Hamlin will pull through’ when Hamlin was in critical condition at the University of Cincinnati Medical Center. 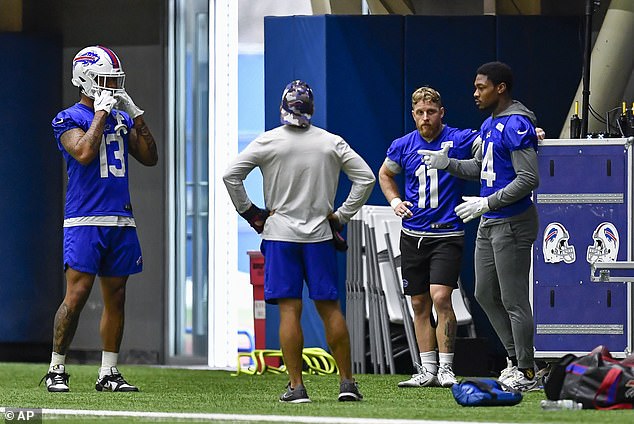 Hamlin’s teammate, the Bills quarterback Josh Allen, said that what had happened to Hamlin was in his eyes akin to a religious experience.

‘[There was] just kind of kind of a spiritual awakening really for me, and I know for a lot of other people that maybe didn’t have the strongest belief, or wasn’t one of the biggest [or] strongest Christian followers,’ the Bills quarterback told ESPN’s Kyle Brandt ahead of Sunday’s playoff matchup with the visiting Miami Dolphins.

‘Something got a hold of me there,’ Allen added. ‘It was extremely powerful that I couldn’t deny.’