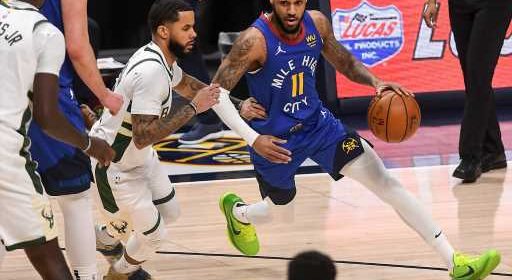 Nuggets guard Monte Morris is “definitely getting closer” as he rehabs a left quadriceps strain and could be upgraded to questionable for Thursday’s game against the Clippers, coach Michael Malone said Tuesday night.

Morris, who missed nine games ahead of Tuesday night’s clash with Philadelphia, had a positive workout on Monday, according to Malone, and is inching closer to a return.

On Monday, Morris tweeted “Real close” followed by a smiling face and a clock emoji.

“Probably questionable against the Clippers and then maybe right after that, we can try to work him into a game,” Malone said.

The Nuggets saw a shakeup to their starting lineup following Thursday’s landmark trade for Orlando forward Aaron Gordon. The seven-year veteran slid in alongside the starters in his debut on Sunday against Atlanta, finishing with 13 points on 6-of-9 shooting.

Upon Morris’ eventual return, Malone suggested he’d initially look to work him in off the bench. Morris, however, has started 10 games so far this season and was playing well with Denver’s regular starting unit before his injury. Once he gets his legs back, it’s possible he could re-assume his starting spot, but Malone wouldn’t commit to anything before then.

“He’s missed time,” Malone said. “Right now, we’re playing fairly well, 11-3 in our last 14 games. In all likelihood, initially, probably bring him in off the bench and get him back acclimated to playing at a high level for us.”

If Morris does eventually move back to the starting lineup, it would send veteran Will Barton to the bench and giving the reserves another playmaking wing. Not that Malone was going to make any decisions before he had to.