There’s just something about playing under the lights in his home arena which brings out the absolute best in Jayson Tatum.

Tatum scored a playoff career-high 50 points to carry the Boston Celtics back into their series against the Brooklyn Nets with a 125-119 victory in Game 3.

It followed another 50-point performance in his last outing at the TD Garden, when Boston dispatched the Washington Wizards 118-100 in their Eastern Conference play-in game. But in an emotionally charged atmosphere with the fans booing and chanting at Kyrie Irving every time he was involved in something on Friday night, Tatum delighted the fervent local fans as he displayed an array of drives, step-back jumpers and 3-pointers to cut the Nets’ lead to 2-1.

He admitted after the game that he likes nothing better than playing in front of a Beantown crowd.

“They definitely helped. Always good to play in front of that home crowd, giving that extra energy. Having them cheering you on, there’s nothing like it and it’s going to be much better come Sunday.”

Kyrie arrives for warmups to a sea of boos, and waves his arms as if to say, “louder!” pic.twitter.com/w4SQRXli2T

Indeed, Game 4 of the best-of-seven series is set for Sunday night in Boston, where the Celtics will be allowed to have a near-capacity crowd in TD Garden when Massachusetts lifts the limits Saturday on crowd sizes due to the pandemic. It was limited to 25 per cent on Friday but even a quarter-full, the fans more than made their presence heard.

Tatum returned to the Celtics lineup after playing just 21 minutes in Game 2 because he was accidentally poked in the right eye by Durant.

He was asked about how he managed his recovery to ensure he was back to his best on Friday by reported after the game.

He said: “(I had) a tough shooting night first game, didn’t get to play that much last game, got poked in my eye. That night it was tough because it was red and swollen and they had to put a bunch of different drops in it, because it was someone’s finger to make sure it doesn’t get infected. But I’ve been fine since then.

“(Tonight we had to) try and protect home court, try get a win at all costs.”

The former Duke Blue Devil struggled in the two games in Brooklyn, shooting a combined 9-of-32 from the floor entering Game 3, but steadied the Celtics in Game 3 after the Nets shot out to a quick 15-point lead.

The Nets started fast, hitting 4-of-5 shots from behind the arc to pull in front 19-4 before Tatum sparked Boston’s comeback with 21 points in the opening half that carried the Celtics to a 61-57 halftime edge.

Indeed, the young Boston star surpassed his Game 2 scoring output of nine in the first quarter alone and was unplayable in the third, scoring 19 points on just eight shots.

Tatum had never even reached the 40-point mark in a playoff game prior to this game, but he locked in that total by the end of the third quarter. He then became the first Celtics player since Isaiah Thomas on May 2, 2017 to log a 50-point playoff game and became the youngest player in franchise history to do so.

On top of his scoring, Tatum also corralled six rebounds, dished out seven assists, and snagged two steals during 41 minutes of action. He did a little bit of everything in Game 3, logging the best game of his postseason career, while making history in the process.

The 23-year-old’s aggressiveness on the night also paid off as he made 13-of-15 free throws.

“Sometimes nights like these are needed,” Tatum remarked about his own output after the game. 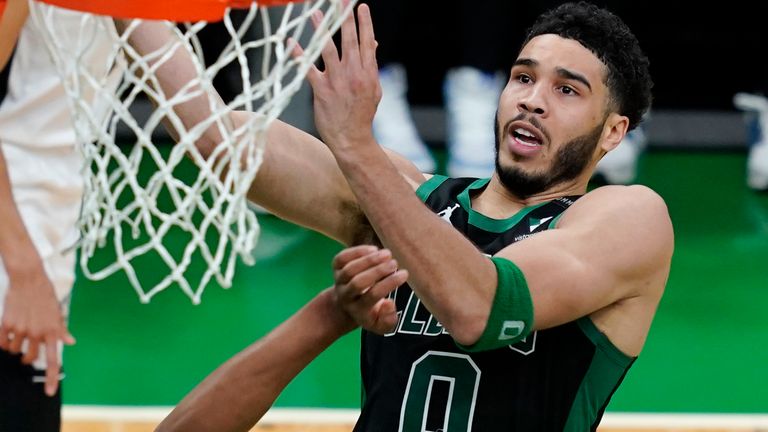 In a postgame interview with NBC Sports Boston’s Chris Forsberg, Tristan Thompson emphasised the importance of Tatum, adding that he made sure to tell him directly how vital his offensive output is to this team.

“He’s gotta do that,” Thompson said. “At the end of the day, we don’t have (Jaylen Brown), and tonight, Kemba didn’t have the best shooting night, but he changed this game with his playmaking and rebounding and guarding Kyrie very well.

“So, for (Tatum), big-time players gotta step up in these moments. When the lights are bright, the golden child has to come in and do what he’s got to do.

“I told (Tatum) after the game, ‘You’ve gotta run it back Sunday. We’re going to need that from you. We’re going to go as far as you take us, so you gotta come out and bring that intensity and go be that player that we all know you can be’.”

Brad Stevens used the word "special" to describe what we all just witnessed from Jayson Tatum.

Meanwhile, it was Irving’s first game in front of Boston’s fans since he left via free agency in 2019. James Harden led the Nets with 41 points, Kevin Durant had 39 and Irving finished with 16 on 6-of-17 shooting.

Marcus Smart added 23 points for the Celtics, Tristan Thompson gave them a huge lift with 19 points and 13 rebounds and Evan Fournier added 17 points. Kemba Walker had a rough night, scoring only six on 3-of-14 shooting.

Irving was booed when he came out for warmups, during pregame introductions and each time he touched the ball, with those turning into loud cheers when he missed shots.

Things turned somewhat ugly when some fans briefly broke into a vulgar chant toward Irving a few times.

Brooklyn cut a 16-point, fourth-quarter deficit to five with just under a minute left but Tatum nailed a step-back jumper from the top and Boston held on.

But this game will be remembered for the relentless performance of Tatum. He scored 11 points in the final 4:46 of the third, helping Boston turn a one-point deficit into a 96-84 lead entering the final quarter. That was a decisive turning point.

And whenever the Nets got close, Tatum would come up with another piece of magic to ensure that Boston got over the line.

With a capacity crowd now to look forward to on Sunday, he’s looking forward to being let loose once again on his home floor as the Celtics look to level the series.

Tatum said: “I can’t wait. It’s been a while since playing in front of a packed house especially in playoffs in the Garden. I’m excited for young guys, new guys who haven’t experienced that yet. It’s going to be fun.

“There’s nothing like playing at home. In front of your home crowd, your family. I’ve played a lot of games in this arena, it’s my favourite place to play and I feel most comfortable here.”