So that’s it, a frantic regular season done and dusted, the NBA’s playoff bracket now set in stone after weeks and weeks of deliberation.

The Lakers did what they needed and beat the Pelicans but it was not enough as Portland got it done against Denver. That means LeBron James will host Steph Curry and the Warriors on Wednesday night in Los Angeles, a player who was up to his usual electrifying antics in the earlier set of games on Sunday.

Elsewhere, Utah held on for the first seed in the West, Brooklyn took second in the East over the Bucks and the Clippers and Mavericks both lost but will face off as the fourth and fifth seeds. 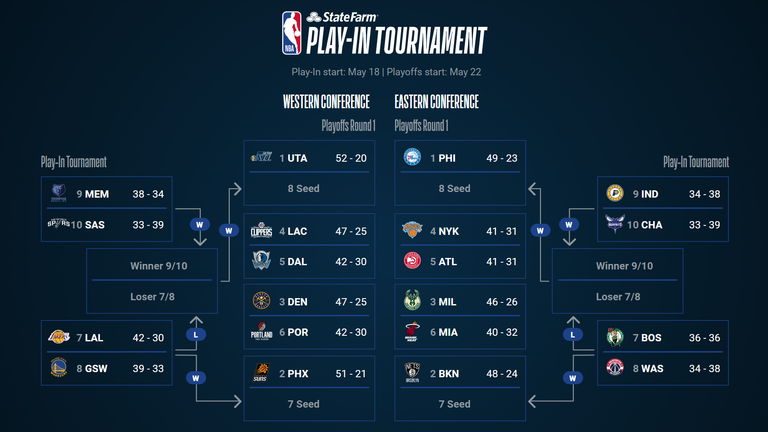 Here’s the full roundup of the final 10 games of the regular season.

Damian Lillard recorded 22 points and 10 assists and Jusuf Nurkic added 20 points and 13 rebounds in the wire-to-wire victory that allowed Portland (42-30) to avoid the Play-In round and claim the No. 6 spot in the West.

Nikola Jokic scored 21 points in the first half before exiting for the Nuggets (47-25), who landed the third seed in West despite the setback because the Los Angeles Clippers lost to the Oklahoma City Thunder. Denver owned the tiebreaker with the Clippers.

The Nuggets and Trail Blazers will see more of each other soon when they square off in the first round of the playoffs.

Rookie Markus Howard scored a season-best 23 points off the bench for Denver.

Jordan Clarkson scored 33 points and made six three-pointers and Bojan Bogdanovic added 18 to lead the Utah Jazz to a 121-99 victory over the Sacramento Kings on Sunday night.

Rudy Gobert added 13 points and 16 rebounds. Mike Conley chipped in 11 points, nine assists and six rebounds. Utah (52-20) clinched the No. 1 seed in the Western Conference and will have home-court advantage throughout the playoffs after finishing with the league’s best regular-season record.

LeBron James scored 25 points as the visiting Los Angeles Lakers defeated the New Orleans Pelicans 110-98 in the regular-season finale for both teams.

James left the game midway through the fourth quarter, slightly favouring the injured right ankle that sidelined him 26 games down the stretch.

But the victory was not enough for the defending NBA champions to avoid the Western Conference play-in tournament. Portland defeated Denver to claim the sixth seed so the seventh-seeded Lakers will host Golden State in a Play-In game Wednesday.

Kevin Durant totalled 23 points, a season-high-tying 13 assists and eight rebounds in three quarters as the Brooklyn Nets secured the second seed in the Eastern Conference with a wire-to-wire 123-109 victory over the Cleveland Cavaliers in New York.

The Nets (48-24) ended the season on a five-game winning streak and edged out the Milwaukee Bucks for the second seed.

A day after shooting 4 of 17 from the field against the Chicago Bulls, Durant made his first eight shots and shot 8 of 10 overall. He finished one shy of his career best for assists, set in 2018 for the Golden State Warriors against the New York Knicks.

Dean Wade and rookie Issac Okoro scored 18 points apiece for the Cavaliers (22-50), who ended the season with 13 losses in 14 games.

Anthony Edwards closed his push for NBA Rookie of the Year with 30 points, and the Minnesota Timberwolves dominated the Dallas Mavericks nearly wire-to-wire for a 136-121 season-ending win on Sunday in Minneapolis.

Edwards capped his debut season with his eighth game of 22 or more points over the final nine. He is in contention to be Minnesota’s first Rookie of the Year since teammate Karl-Anthony Towns, who won the award in 2016. Towns went for 23 points and nine rebounds in Sunday’s regular-season finale, and helped key the Timberwolves (23-49) to a 62-38 advantage for points in the paint.

Luka Doncic scored 18 points with six rebounds and six assists for the Mavericks, but shot just 2 of 7 from outside. Dorian Finney-Smith went 3 of 5 from deep and scored 15 points in the loss.

Dallas came into Sunday a game ahead of Portland and the Los Angeles Lakers in a tight race for playoff seeding.

Aleksej Pokusevski scored a career-high 29 points to lead the Oklahoma City Thunder to a 117-112 home win over the Los Angeles Clippers on Sunday night in the final night of the NBA regular season.

The loss sent the Clippers to the No. 4 seed in the Western Conference. They will face Dallas in the first round of the playoffs.

Another rookie, Josh Hall, scored a career-high 25 points with 10 rebounds. Hall, who played more than 42 minutes, hadn’t scored more than 10 points or pulled down more than seven rebounds before Sunday’s game.

Moses Brown had a career-high 24 points on 12-of-19 shooting while adding 18 rebounds. Eight players scored in double figures for the Clippers, led by Terance Mann’s 19 points.

Thaddeus Young finished with 20 points and seven rebounds to help the host Chicago Bulls finish their season with a 118-112 victory over the playoff-bound Milwaukee Bucks.

Young was one of six Bulls who scored in double figures as Coby White totaled 19 points, five rebounds and five assists while Lauri Markkanen had 17 points and five rebounds.

Locked into the No. 3 spot in the Eastern Conference after the Brooklyn Nets’ victory over the Cleveland Cavaliers earlier in the evening, the Bucks (46-26) rested all of their starters – Giannis Antetokounmpo, Khris Middleton, Brook Lopez, Jrue Holiday and Donte DiVincenzo.

Jordan Nwora totaled 34 points and 14 rebounds – both career highs – to lead the Bucks, who will face the sixth-seeded Miami Heat in the first round of the playoffs. The Heat eliminated the Bucks in the second round last season in five games.

Precious Achiuwa had 23 points and 10 rebounds to lead the Miami Heat to a 120-107 road win over the Detroit Pistons in the regular-season finale for both on Sunday.

With little to no incentive to win the game, each team rested several starters.

Miami already had the No. 6 seed in the Eastern Conference playoffs clinched going into the game, while Detroit was looking to clinch the league’s second-worst record and enhance its odds of winning the first pick in the NBA draft lottery.

The Atlanta Hawks, led by rookie Onyeka Okongwu’s career bests of 21 points and 15 rebounds, tuned up for their first trip to the playoffs since 2017 with a 124-95 win over the visiting Houston Rockets.

The Hawks will be the No. 5 seed in the Eastern Conference and face off with the No. 4 New York Knicks in the first round.

Okongwu, who posted his second double-double, was 10-for-13 from the field and added three assists, two steals and two blocked shots. The Hawks had eight players in double figures, including Skylar Mays with 16, John Collins with 15 and De’Andre Hunter with 14.

Tyrese Maxey had 30 points, seven rebounds and six assists to lift the host Philadelphia 76ers over the Orlando Magic 128-117.

Rookie Cole Anthony led the depleted Magic with a season-high 37 points, including 14 for 14 from the free throw line. Donta Hall added 14 points and 10 rebounds, Moritz Wagner added 14 points and Chasson Randle had 11 for the Magic (21-51), who finished the season with seven straight losses.