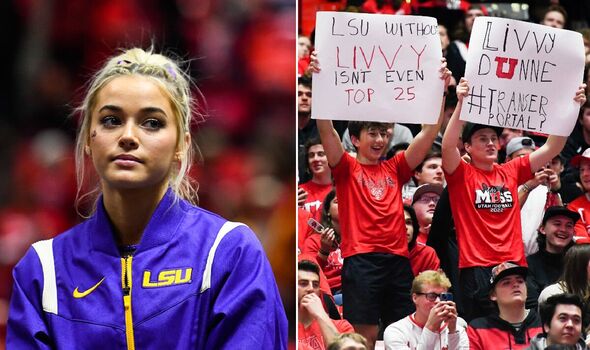 Star gymnast Olivia Dunne has exploded in popularity over the past two years, amassing almost 10million followers across Instagram and Tiktok. She’s also reportedly the highest-earning college athlete thanks to that soar in popularity and is understood to be worth around £2m ($2.5m).

However, that extra attention has come at a cost given her college, Louisiana State University (LSU), has been forced to hire a bodyguard to protect the student. That’s after Dunne was recently mobbed by ‘rude’ thralls of mostly male fans at a gymnastics competition in Salt Lake City.

The LSU Tigers opened their season against the Utah Utes, where Dunne fanatics attended in high numbers before queueing up to see her at the venue’s exit. Dunne didn’t participate in LSU’s defeat due to injury, but that didn’t prevent legions of her disciples turning out in great volume, with some even reportedly heckling other gymnasts as they left.

One video taken by Olympian and former NCAA champion gymnast Samantha Peszek showed boys lined up behind fencing in the hopes of sighting Dunne at the Huntsman Center. They could be heard shouting “we want Livvy” and “give us Livvy” in a scene Peszek called “so scary and disturbing and cringey.”

LSU head coach Jay Clark recently explained the security situation to reporters: “We will have security detail with us now when we go on the road and we will be working to create a perimeter around where we get on the bus, where we load.

“[The officer] will be there to create a perimeter that keeps everybody safe. Things have to change. We just can’t expose them. We’re looking at some policy changes that will give parents access at a different location to their daughters.”

Dunne, 20, took to Twitter on Sunday, two days after the meet in Salt Lake City, and pleaded with her fans to be more courteous. “I will always appreciate and love the support from you guys, but if you come to a meet, I want to ask you to please be respectful of the other gymnasts and the gymnastics community as we are just doing our job,” she wrote.

The former Team USA representative was one of the biggest beneficiaries after the NCAA changed its long-held law preventing student athletes from making money off their name, image and likeness. She has since signed a deal with Endeavor, the same company that owns the world’s biggest mixed martial arts promotion, the UFC.