As Jorge Masvidal hugged Stephen Thompson in the centre of the Octagon in Madison Square Garden, congratulating his opponent on a unanimous-decision victory, ‘Gamebred’ winced.

It could, of course, have been a physical reaction to having been carved apart by ‘Wonderboy’s incisive striking for 15 minutes, but the result seemed to have cut deeper than any of Thompson’s offense.

For the second time in six months, Masvidal had been sentenced to defeat by the judges. The Florida native’s four previous losses had come via split decision.

The New York nixing by Thompson in November 2017 came just days before Masvidal’s 33rd birthday, and he knew this age would combine with a professional MMA record of 32-13 to confirm “journeyman” status in the eyes of most fans, even those endeared to him by his street-fighting background.

What followed was an unfortunately belated epiphany, but one crucial to Masvidal’s pugilistic rebirth: stop leaving your career in the hands of the judges.

Naturally it is one thing to think in that manner and another task altogether to put that into practice in the ring. Yet Masvidal did just that, and with startling ease.

This rebirth, which Masvidal would label the “resurrection” as he transformed into “Street Jesus”, saw the versatile Floridian at last add an urgency to his approach, and it was inescapable as he returned in March 2019 and stole Darren Till’s consciousness in the Liverpudlian’s home country, knocking out ‘The Gorilla’ in the second round. 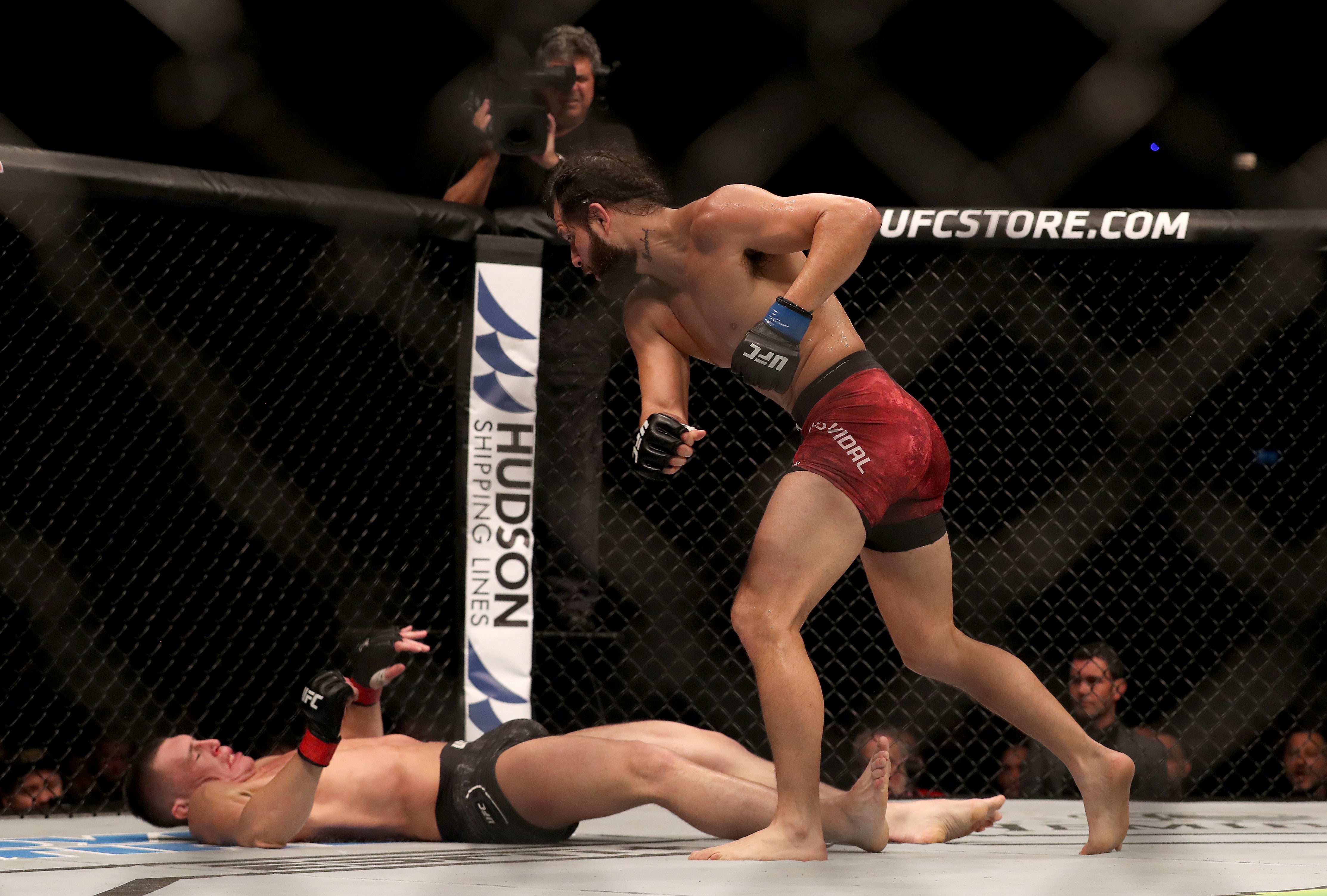 It was even more evident in Masvidal’s next bout, four months later, when he set Ben Askren on course for a second retirement from MMA by propelling himself at the former Olympic wrestler’s skull with a flying knee, recording the fastest KO in UFC history at just five seconds.

But it wasn’t just the urgency that unlocked an unseen side to Masvidal. It wasn’t just the ruthlessness behind those two results that drew in the UFC’s fanbase. It was in the moments outside the Octagon, in between these contests, that helped to elevate Masvidal to stardom – with superstardom soon to follow.

Minutes after stunning Till in London, Masvidal abandoned an interview to throw hands at another Briton in Leon Edwards, claiming to have hit him with a combination that he would later that night call a “three-piece and a soda”. In his post-fight press conference after turning Askren into a meme, Masvidal was asked whether his two follow-up strikes on his clearly unconscious opponent were necessary. “Super necessary”, according to Masvidal.

All of a sudden – almost as suddenly as he had dispatched Askren – Masvidal’s face was on T-shirts. His catchphrases were on cotton. 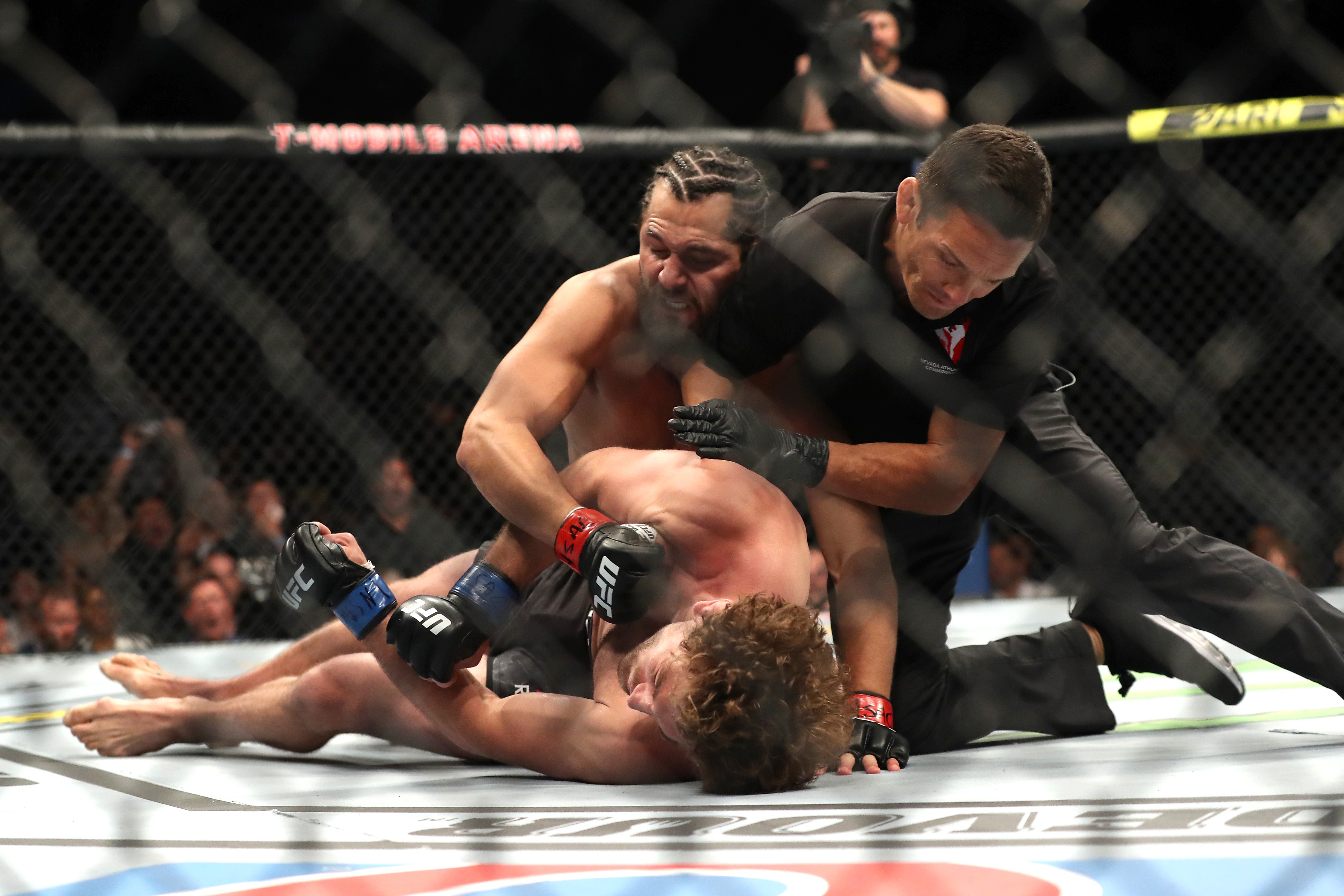 But the stratosphere of superstardom still beckoned, and Masvidal became MMA’s biggest breakout star since Nate Diaz by beating that very man in Madison Square Garden, the same venue where ‘Wonderboy’ had realigned ‘Gamebred’s priorities exactly four years prior – almost to the day.

In press conferences before and after the fight, Masvidal had sported Tony Montana-esque suits. In the ring, Masvidal beat Diaz to a pulp, to the point that his compatriot would be forgiven for thinking the blood trickling into his eyes was a warning light amid the oncoming onslaught.

A doctor stepped in after the third round and, in one of the most surreal scenes in UFC history, Dwayne ‘The Rock’ Johnson presented Masvidal with a belt that read ‘BMF’ (Baddest Mother******), as then president Donald Trump applauded from the crowd.

Masvidal could celebrate his 35th birthday safe in the knowledge that the lettering on the “journeyman” tag had almost completely worn away. 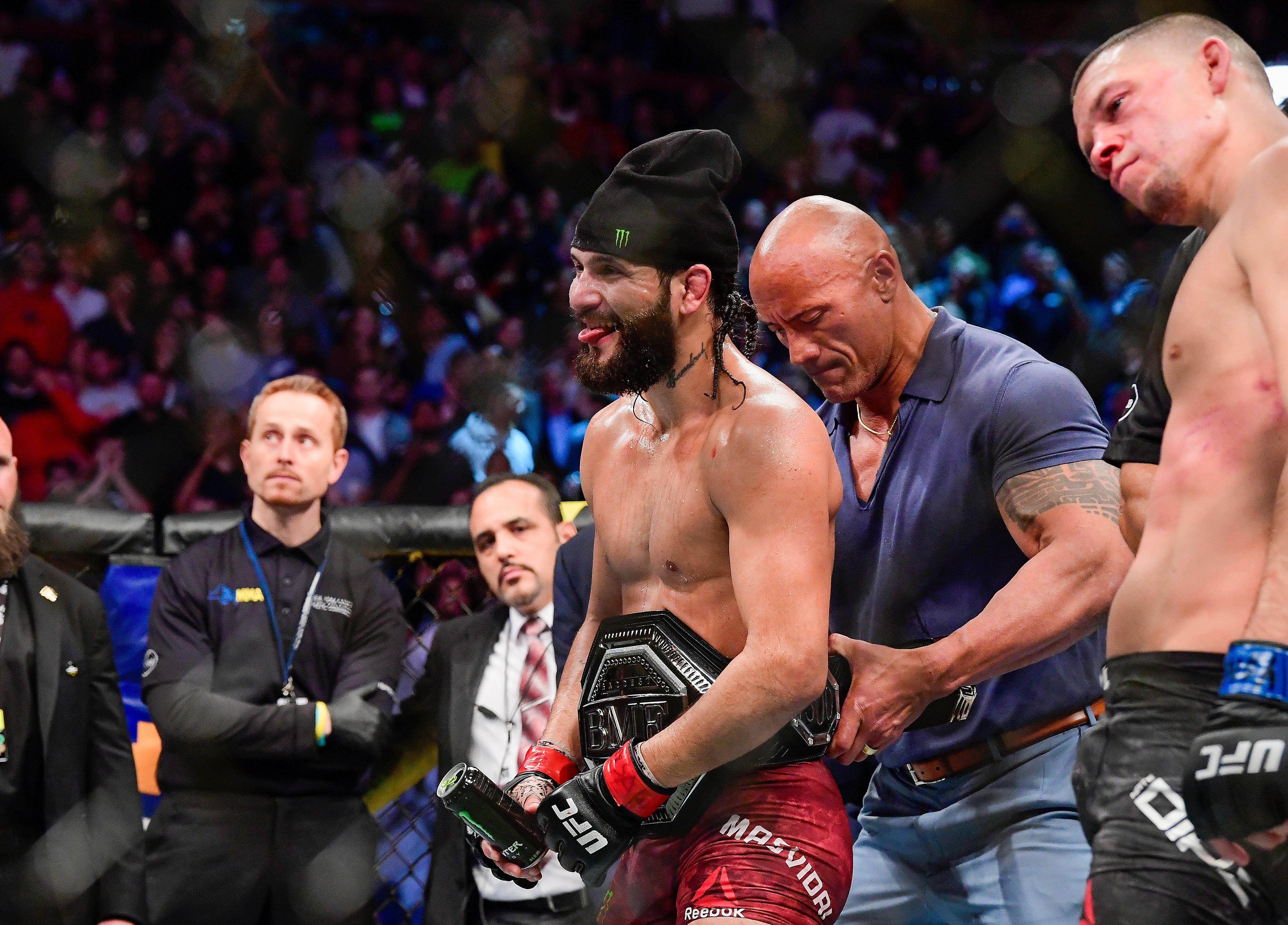 But one accolade would erase it completely: winning a world title.

Masvidal had previously flitted between lightweight and welterweight, but his blitzing run at 170lbs led him to the throne room, where Kamaru Usman was sitting with increasing comfort.

Having dominated Tyron Woodley to win the welterweight championship in March 2019, two weeks before Masvidal’s victory over Till, Usman ended the year by finishing Colby Covington in the fifth round of a war fuelled by bad blood. Gilbert Burns was to be next for the titleholder, but the challenger’s positive coronavirus test result left UFC 251 without a main event.

Enter Masvidal. On six days’ notice, he flew to ‘Fight Island’ in Abu Dhabi, meeting Usman in an empty arena with the chance to settle some personal differences between the pair and crown this unexpected stage of his career with gold.

Following an intense weight cut, Masvidal knew his true chance of wrestling the belt from Usman would in fact be to avoid the champion’s grappling and look for an early finish. This was evidenced by the challenger’s über-urgency in throwing six kicks in the opening 15 seconds. The fifth was caught, but Masvidal persisted, and the sixth saw Usman take him down . Although Masvidal scrambled back to his feet and edged a competitive first round, the end of that frame marked the end of his threat. Usman, as he so often does, outwrestled his opponent for the majority of the fight and eased to a decision. 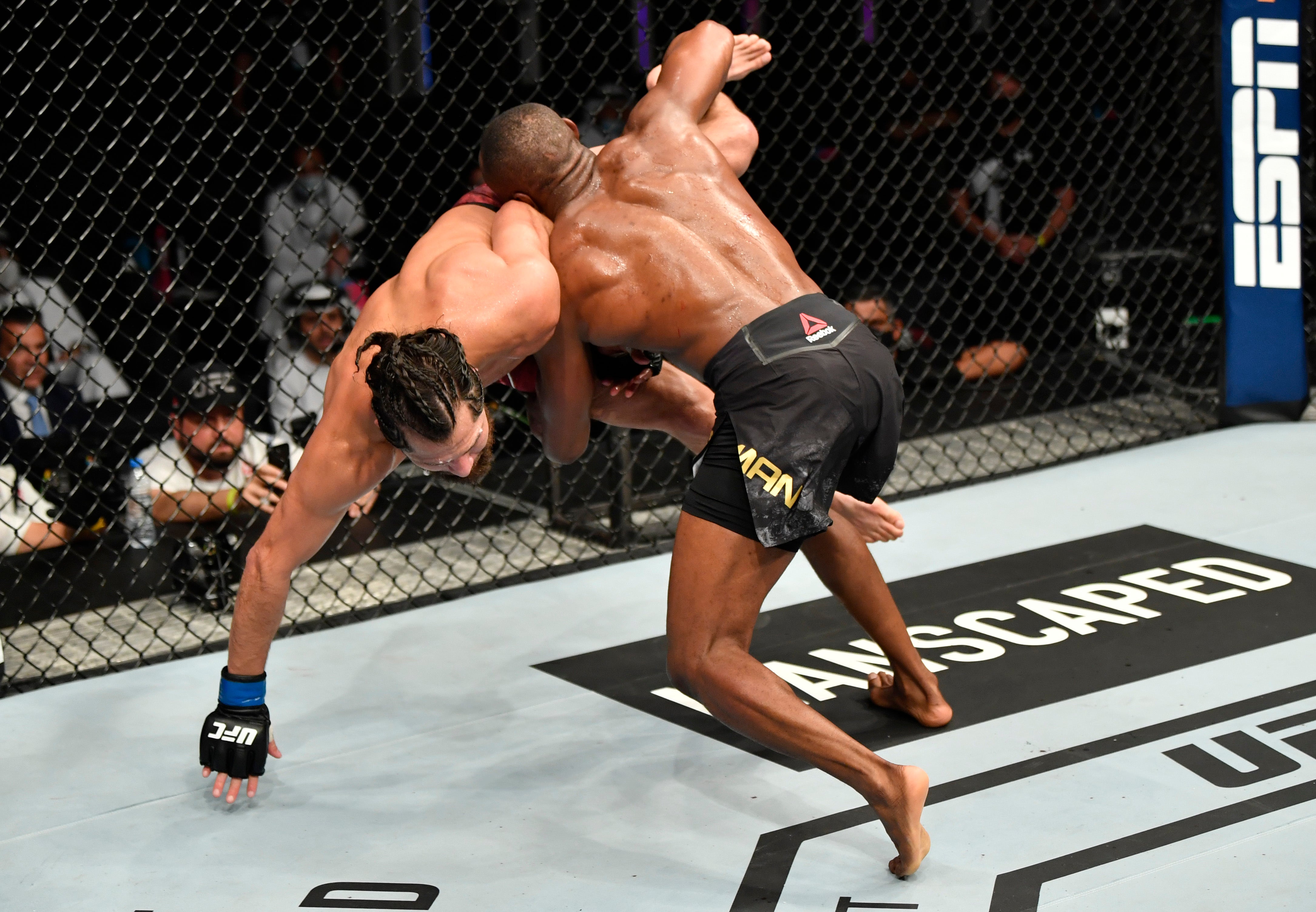 Masvidal has not fought since, while Usman’s next and most recent defence saw him finally take on Burns in February. The Brazilian was deemed the closest thing to a nightmare match-up for the ‘Nigerian Nightmare’, but the stark improvements in Usman’s striking – honed by new coach Trevor Wittman – saw the champion floor and finish his former team-mate early in the third round.

Instead of calling for a new challenger after that contest, Usman targeted the money fight: a rematch with Masvidal. It was an unusual callout for a champion, to chase a challenger whom they had already beaten – and with ease – but the financial upside was undeniable, and Usman said he had taken exception to Masvidal’s “built-in excuse” for losing the pair’s first meeting.

Usman’s perception of that “excuse” – Masvidal’s mere six days of preparation – is understandable. He had a free pass after his defeat due to the good will of the MMA fanbase towards him, and the American’s late-notice entry into the match-up.

The question, as is the same for most losers heading into a rematch, is: Has Masvidal improved? Given his inactivity since that contest last July, there is no available evidence, and there will be none until he steps into the Octagon with Usman again on Saturday in the main event of UFC 261.

However, based on what he has said, it seems the only improvement Masvidal feels he needs will come from having more than six days to prepare for this clash – as opposed to having had almost a year to work on making the necessary adjustments.

That is not to say Masvidal hasn’t spent the last nine months working on a gameplan to defeat Usman, but we know from the champion’s most recent outing just how much he has bettered himself. The existing evidence lends greater support to the argument that Usman will win more dominantly, not that Masvidal will narrow the vast points gap from the scoreboards last July.

Another comprehensive defeat by the champion, this time with no “built-in excuse”, could see Masvidal’s enigma evaporate for good. A grudge match against former friend Colby Covington – one of the most appealing match-ups in MMA – could even evade the Florida native.

Now 36, Masvidal has undertaken an impressive journey to avoid the destiny of the “journeyman”. His “resurrection” has lasted two years, but there is no guarantee of ascension now.

That said, if one is to occur, there could be no better backdrop than a full-capacity arena in Masvidal’s home state.

In front of 15,000 fans, Masvidal’s future will be defined this Saturday.