DENVER — Yes, even when you’re the mighty, talented and filthy-rich Los Angeles Dodgers, you can have days like this.

The Dodgers may have removed the burden of their World Series drought last year, but on opening day Thursday at Coors Field, they showed that bizarre things can happen to even the greatest of teams.

The Dodgers had one of their own teammates rob them of a homer. Their best player misplayed a fly ball into a triple. Their World Series hero allowed a routine grounder to squirt through his legs for a run. Their three-time Cy Young winner had the worst opening-day start of his career. Their bullpen threw three wild pitches in the same inning. And their powerful lineup stranded 14 baserunners by going 3-for-16 with runners in scoring position.

So yeah, even when you’re the Dodgers, you can look like the Colorado Rockies and lose 8-5 to the team that’s expected to finish with the worst record in the National League West.

While this game may already be on the Rockies’ 2021 highlight reel, the Dodgers can only hope the memories of this one last as long as a can of Coors Light.

“Baseball’s a long season, you’re going to be some games like this,’’ Dodgers manager Dave Roberts said. “Our club, for the most part, doesn’t have too many games like this.’’

LINDOR: 'A little kid from Puerto Rico' gets his $340 million payday

MLB 2021: World Series and award predictions for the new season

It’s silly, of course, to suggest that one game means anything, let is alone a sign that the Dodgers may be the latest to suffer a World Series hangover.

“I think it’s all kind of a mental thing,’’ said Dodgers right fielder Mookie Betts. “If you say there’s a hangover, a hangover is more bound to happen. …To me, those are all excuses. You fix your mind to go into battle and let the chips fall where they may.” 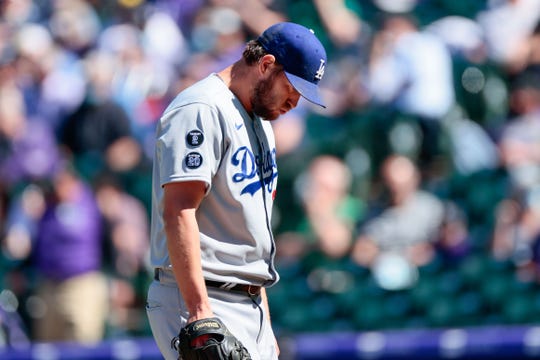 The Dodgers know there are those who don’t fully recognize last year’s World Series since it was an abbreviated 60-game season and a one-off postseason format. But the Dodgers argue it was even more challenging than a traditional season and they'll proudly hand out those World Series rings next week week at their home opener.

The last team to win consecutive World Series titles was the New York Yankees two decades ago, winning three in a row from 1998 through 2000. No National League team has won consecutive championships since Cincinnati’s Big Red Machine in 1975 and 1976.

“All throughout the winter and spring,’’ Roberts said, “I heard that conversation from players. You look back at the Yankees, that core of guys, that period of time when they’re dominant, that’s something we have an opportunity to do.’’

If there’s pressure to repeat, the Dodgers say, they’re sure not feeling it inside their own clubhouse.

“Expectations are higher from the outside,’’ Betts said. “I think internally we expect ourselves to perform well and make it back.

The Dodgers know their 2020 team will be remembered forever, the team that finally broke the 32-year drought, but there’s still a feeling of emptiness.

They never got to spray champagne, scream and hug, and party until the wee hours of the morning in their clubhouse.

They never got a ticker-tape parade in Los Angeles.

“It doesn’t entirely feel like it even happened,’’ Dodgers first baseman Max Muncy said, “because we never really did get that full chance to celebrate last year.

“It was kind of just like the season ended and that was it. I’m hungrier than ever to go out there and win a championship again just because I feel like we haven’t had that full chance to celebrate.

“And hopefully once we do it again, we get that chance.”

Certainly, as the Dodgers exhibited in front of a crowd of 20,570 in Denver on Thursday, they aren’t going to win games by simply stepping onto the field.

“We know it’s going to take a lot of hard work and we have a bullseye on our back,’’ said Betts, who misplayed Chris Owings’ fly ball in the third inning that resulted in a run. “But I’d rather be playing with a bullseye on my back than trying to chase to get to the top.’’

The Dodgers played this game as if there was a bullseye over their head this day, highlighted by a baserunning blunder from which they never recovered.

It happened in the third inning when Dodgers center fielder Cody Bellinger hit what appeared to be a two-run homer. Bellinger’s deep fly ball landed in Rockies left fielder Raimel Tapia’s glove as he leaped against the wall, but bounced out into the seats.

Bellinger rounded first base, celebrating his home run, only to see Turner sprinting past him. Turner, who had rounded second, retreated when he thought that Tapia caught the ball. He scurried back to first base making sure that he wasn’t doubled-up.

Bellinger pleaded to first-base umpire Chris Conroy that it was a homer. No argument there, but the fact that Turner passed him on the basepaths meant that Bellinger was out.

Instead of a two-run homer, Bellinger was credited with a run-scoring single.

Cody Bellinger hit a home run with Justin Turner on base, but Turner thought it was caught for an out and ran back to first base.

Bellinger passed Turner on the bases and was ruled out.

The home run counted for one run instead of two. pic.twitter.com/ErecD0td3d

“It was just one of those funky plays,’’ Roberts said. “I don’t think it’s going to happen again this year."

It was that kind of day for the Dodgers. Shortstop Corey Seager, the World Series MVP, booted a routine grounder. Reliever Jimmy Nelson threw two run-scoring wild pitches the same inning. And then there was Clayton Kershaw.

Kershaw, pitching in his ninth season-opener, entered the game having the lowest opening-day ERA (1.05) of any pitcher in history with at least 40 innings. The Rockies scored six runs (five earned) off him in just 5 ⅔ innings – the same number he had yielded across 51 ⅔ innings in his previous eight openers.

Kershaw, who gave up 10 hits, walked one and struck out two, was able to induce just five swings-and-misses among his 77 pitches. He and Roberts said his slider lacked it usual sharpness.

Certainly, it’s not a good sign, he knows, when he’s better at the plate than on the mound, going two-for-three after not lifting a bat in 2020.

Still, despite all of the Dodgers’ blunders, they still had a chance to win this game in the ninth inning, loading the bases with one out before ending on Betts’ liner to Owings at second base.

“You’re going to get everybody’s best,’’ Betts said, “so we have to match their energy even though it’s kind of tough.

“We have a really good team, but we have to go out and play too. We can’t just be good on paper."