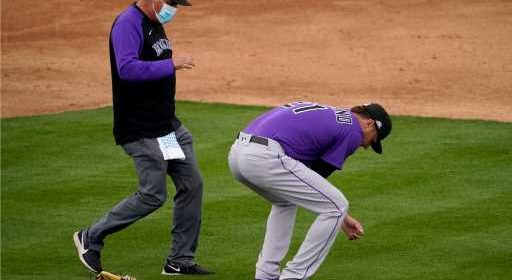 There is no date circled on the calendar for left-hander Kyle Freeland’s return from a strained shoulder. There is, however, encouraging news.

“Kyle is doing some strengthening exercises in Arizona,” manager Bud Black said Friday. “He’s feeling better each and every day. No timetable yet. But I know that the work he’s doing and the intensity of that work is increasing every day.

During a Cactus League game against Oakland on March 23, Freeland bent over in pain and grabbed his left shoulder after spiking a pitch into the ground. At that time, the Rockies feared it might be a season-ending injury. But after a series of tests, it was determined that although Freeland would be out at least a month, he would return this season.

Right-hander Jon Gray, scheduled to make his first start of the season Saturday against the Dodgers, has talked with Freeland since the injury occurred and said the southpaw is dealing with the injury as best he can.

“He seems to be doing very well,” Gray said. “He knows he’s going to be out there again. We’re excited for (his return) and we know it’s going to get here quick.

“He just needs to take care of a few things and get back to being healthy and we’ll be rolling again.”

Although Black is encouraged by Freeland’s progress, he cautioned that his recovery won’t be rushed.

“There is a component of letting Mother Nature take its course here to heal the shoulder strain. That has to happen,” Black said.

Locked in. Closer Daniel Bard recorded six saves in six opportunities last season and was the only National League pitcher with five or more saves and a perfect save percentage. He notched his first save of 2021 on Friday against the Dodgers, but it was a highwire act.

“Focusing is not a problem in that situation,” Bard said. “If anything, for me, the higher-leverage situation, like last night’s, the more I focus. The goal is clear: keep those runs from scoring and maintain the lead. So that’s a clear goal for me and I absolutely love those situations.”

Sure enough, Bard struck out Matt Beaty looking and got the dangerous Mookie Betts to line out softly to second baseman Chris Owings to close out the game.

Bard made it clear he would prefer not to load the bases, of course, but he also said: “I threw some of my best pitches at the end.”

It takes a thief. Owings, who started in center field Friday night, went 3-for-3 with a triple and two stolen bases Thursday, becoming the first Rockies player in franchise history to steal two bases on opening day.