Wilde day at the ’Bool as Vanguard beats stablemate in Brierly

Local trainer Symon Wilde is the king of Warrnambool once again, dominating day one of the three-day carnival with four winners including Vanguard in the feature Brierly Steeplechase.

Just a neck separated the winner from stablemate Britannicus, after the pair levelled up in the closing stages of the gruelling 3450-metre jumps race in front of a swollen grandstand.

“Have you ever heard a roar from a crowd? It was like the football or something,” Wilde said.

“What a race, I loved the spectacle. I really love staying horses, we’re lucky enough to have the set-up [we’ve got], we’ve got a fantastic team, and we’re able to showcase our wonderful staff at this meeting, that’s the best part about it.” 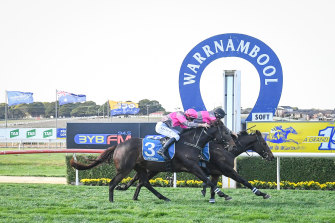 On the trot: Vanguard wins the Brierly Steeplechase. Credit:Racing Photos

The race was spoilt by a fall to equal-favourite Valac, but the Ben and JD Hayes-trained grey appeared fine post-race, and walked onto a float. Racing Victoria stewards said the grey, who won over the hurdles during the May carnival last year, would be sent to the veterinary clinic for monitoring. His jockey Aaron Mitchell was a little dazed and initially thought to have escaped injury however was later transferred to the Warrnambool Base Hospital for scans.

It was an inspiring race, nonetheless, with Wilde’s grey and pink silks – donned by his 2018 Brierly champion Gold Medals – filling the photo on the winning post.

Britannicus took up the lead and led by as much as 12 lengths at one point, but the small field made ground on him approaching the final turn, and after Valac fell, Vanguard was the only threat to the leader.

Will Gordon elected to go inside the Aaron Mitchell-ridden Britannicus in the final straight, and whether or not the ground was better, the more fancied stablemate rose late to give Wilde his fourth win for the day.

“It was a great battle,” Gordon said.

“We’re both punching around on the flat too, we’re pretty good mates too, so it was good going toe-to-toe with Lynchy, one of the good guys of racing as well.

“It was a pretty stirring finish, but my lad was just the better stayer.”

Wilde said it was great to be getting winners at his home carnival. 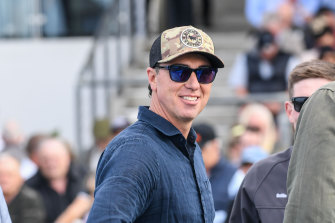 “We bought Vanguard to target this carnival, some stable clients jumped in, and Britannicus was a second-hand horse who is having a great career,” Wilde said.

“We’ve got every inch out of him, and he’s doing a terrific job.

“Everyone’s having a lot of fun, and I’m just so pleased with how it’s worked out.”

Vanguard followed the wins of Count Zero and Rider In The Snow in the maiden hurdles, and Mio Capo in the 1200m maiden on the flat for Wilde, with Britannicus his second runner-up placegetter.

Wilde said Vanguard was a chance to back-up in Thursday’s Grand Annual, but he also has American In Paris in the feature race.

Earlier, Northern Irish jockey Megan Dunseath became the first female rider to win over the jumps during a Warrnambool May carnival, when she helped the Paul Preusker-trained Lord Pierro to victory in the first race of the day. 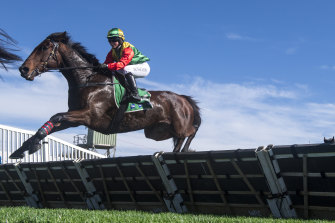 Megan Dunseath became the first female rider to win over the jumps during a Warrnambool May carnival. Credit:Getty Images

“I got told yesterday, but I tried not to think about it,” Dunseath said, after being asked if she knew of the record.

“It was an unbelievable reception. Warrnambool is just brilliant. I love it. I arrived three-and-a-half years ago, I got sponsorship with Richard Cully, and I’ve been there [Ballarat] since.”