It can take more than a century to build a reputation – and sometimes just a moment to destroy it.

No one is more aware of that than the Victoria Racing Club’s chairman, Neil Wilson, the former chief executive who succeeded Amanda Elliot in the role late last year. 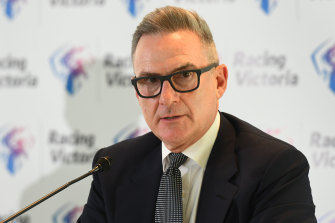 It was just a moment, a fraction of a second, in which Irish blueblood Anthony Van Dyck shattered his leg, sustaining the injury that led to him losing his life in last year’s Melbourne Cup.

In death he garnered more headlines than he did for finishing second in the Caulfield Cup at his previous start, because he joined an ever-growing list of mainly overseas-trained fatalities that have sullied the reputation of Australia’s greatest race.

Though the VRC did not make the decision to race him, he did run in their famous race at their famous Flemington track .

And that is why, in the wake of the horse’s death, they have had to bear some of the opprobrium and criticism from some quarters of the general public.

Wilson joined racing officials in the rooftop room of Flemington’s new grandstand on Wednesday to begin the process of restoring the tarnished image of the Melbourne Cup through a raft of changes designed to prevent any more fatalities this November.

It may well be the race that stops the nation, a totemic event not just in Australia’s sporting calendar but woven into the very fabric of the national mythology.

But the Cup, like all events using animals, has to be very careful about its social licence.

For it to flourish into the future Wilson, an experienced IT entrepreneur and businessman before becoming a VRC director almost a decade ago, knows it must maintain that social licence.

He acknowledges the importance of underwriting the value of the VRC brand and ensuring the reputation of the Cup is restored – not so much with those involved in racing from overseas, who weigh up the risks before coming to Melbourne – but with an increasingly concerned public whose view of horses can be limited and more sentimental.

Wilson says that the VRC backs all of the 41 recommendations that are being introduced to improve the race’s safety record and emphasises their groundbreaking, extensive nature.

“Everyone at the VRC feels a deep responsibility to provide for the safety of every participant … we want every horse and every jockey to come home safely,” he said.

The size of the field will not be reduced from 24 to 20 runners – a bigger field will make for a more exciting build-up and almost certainly drive higher wagering turnover .

But the need for all overseas Cup runners to have scans five days before the big race will change the complexion of one of Derby Day’s biggest races, the Lexus Stakes. The winner of the Lexus is always guaranteed a Cup start, but if it is an international that won’t be the case now, as the traces from any post-race scan to ensure it has not suffered any injuries would not have cleared the horse’s system by Cup Day.

Wilson says that no sponsors have pulled out of races as a result of the adverse publicity from last year’s fatality and subsequent review.

“The number one concern is equine welfare … it has an impact on our reputation and brand. We deal with all of our sponsors … we have been on a journey with our sponsors for years,” he explained.

“It [the benefits and costs] is something they consider when they enter a relationship.”

So important are those relationships, says Wilson, that “each major sponsor has been briefed [in advance] on this outcome.”

The spotlight will be on the Melbourne Carnival, Racing Victoria and the VRC on the first Tuesday of next November.

No one in racing can guarantee that tragedy will never strike again.

But for Wilson and his team it is about controlling the controllables, and the VRC chairman is determined to do his utmost to ensure there is no repeat in 2021.