Race-by-race preview and tips for Nowra meeting on Tuesday

We start with a small field over the longer trip. This looks at the mercy of provincial three-year-old 5. Sky Ace who will find this easier than her last two. Hard fit deep into her prep, and well treated on the limit weight. 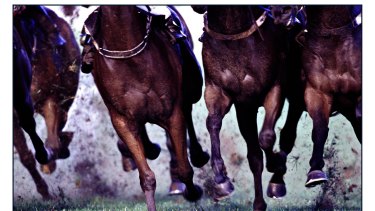 Nowra will host a seven-race meeting on Tuesday.Credit:Phil Carrick

Dangers: Improving 4. Hombre Grande has had four runs back, and draws to get a soft run on speed; while 2. Turnaround Time is also back in quality fifth-up, and gets a cosy run on the fence behind the speed.

How to play it: Sky Ace to win

Odds and Evens: Split a special

Keen on six-year-old 8. St Anton making it two straight this prep. Came from well off the speed for a tough heavy track win in weaker class. Draws to get a trail off the fence, and this isn’t much harder.

Dangers: Metro filly 3. Eve ‘N’ Ruby is the natural threat third-up with winkers applied in a race with less depth. Keep safe 7. Royal Gun Salute who has shown steady improvement this prep; while 2. Papadum can improve sharply second-up and down in quality.

How to play it: St Anton to win

Tricky affair, although metro three-year-old 1. Packer only needs to slot in for cover from the awkward draw to be the one to beat. Charged home from well back in a handy country maiden before sitting closer and missing narrowly at Muswellbrook. Those runs augur well for this, and he’s well treated carrying only half a kilo more.

Dangers: Improving three-year-old 2. Echo’s Arrow can figure at his third start dropping back from provincial company. Keep safe 6. Khumbu who is honest, and drops to the limit weight; while both 3. Mancconi and 5. Composite go in trifectas and first fours.

How to play it: Packer to win

Progressive metro filly 5. Amazing Nicci finds an ideal race fourth-up, and can go back-to-back after sweeping home for a dominant heavy track maiden win at Orange. Draws to be tucked away back in the field, and only needs clear air from the 400m to run over them.

Dangers: Big watch on Canberra mare 1. Cotton Fields resuming behind a nice trial win, and already a first-up winner. Provincial mare 2. Maddison’s Missile is also chasing a second straight win after tracking the speed and going home best in a handy CL2 at Wagga; while 4. Unyielding Spirit was a tenacious maiden winner at the provincials three starts back, and will find this easier than her last two.

How to play it: Amazing Nicci to win

Yet another city filly 8. Miss Maz is well-placed to strike first-up into her second full prep. Hasn’t publicly trialled, but reportedly working well and was narrowly beaten fresh last time in a deeper provincial race.

Dangers: Watch the betting on provincial filly 5. Bondadosa third-up after charging home to miss by a whisker here at big odds. Metro filly 10. Rolene resumes off a near nine-month break and two trials, winning the latest on synthetic. Gap to the rest.

How to play it: Miss Mazz to win

This is well within the reach of yet another Warwick Farm visitor, three-year-old 4. Unwritten who has only finished further back than second once in four runs this prep. Surged home in soft ground to win his maiden two starts back before chasing bravely as favourite at Mudgee. Handles the wet, and just needs to chart a path away from the fence if the inside ground doesn’t hold up.

Dangers: Rival ’Farm four-year-old 3. Tip Top Timing is the natural threat fifth-up coming back from a deeper provincial class where he was beaten under two lengths. Improving three-year-old 1. Conegliano was preferred here to the Kensington meeting on Monday and can run into a place second-up; while 6. Aurora Florentina heads the rest.

We wrap the meeting with a very modest restricted sprint. Like five-year-old 1. El Prados deep into the prep in going he relishes, and big weight off-set by a 2kg claim. Stuck on well after leading in a deeper BM 58 last start, and was beaten by a good one at his only previous start at this track.

Dangers: Lightly raced metro filly 6. Sinaloa hunts a second win at only her fourth start, although not totally convinced she’s right at home in heavy ground. Include provincial filly 5. Las Vegas Girl rising in grade and dropping in weight fifth-up; while 7. Taylor Be Swift is some value second-up.

How to play it: El Prados to win