Race-by-race preview and tips for Newcastle on Tuesday

Selections based on a good track. Monitor for bias/pattern.

3. Soobooco resumes as a gelding and has trialled well recently at Wyong. Further, that heat was run in slick time and has produced a subsequent winner. First-up last prep, he ran second at Kembla after sprinting hard but was run down late and beat the rest easily. Moreover, repeating that effort/figure will make him hard to beat. 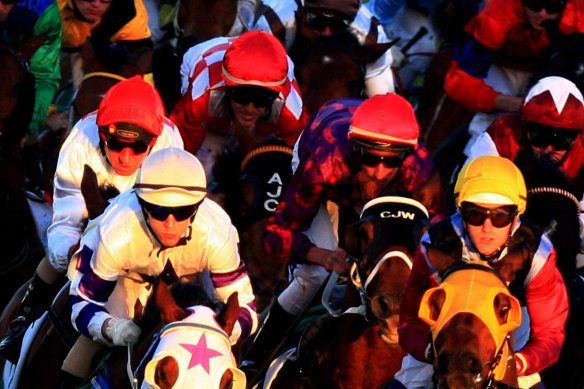 Dangers: 8. Steel My Thunder had every chance first-up but tried hard in a high-rating race relative to the day. The filly has a race experience edge on most of her rivals and receives blinkers for the first time. Debutante 6. Shalaas Moment has had two quiet trials leading into this event on wet ground. She looks a nice type, and the in-form Brett Prebble rides. First starter 2. News At Five will roll forward from the kind draw and give a sight over the squib distance.

How to play it: Soobooco WIN.
Odds & Evens: SPLIT.

1. Flying Annie was honest first-up at Gosford, where she beat the rest easily in a solid time race and was only run down over the concluding stages. The mare has been a consistent type her whole career, but the dry track is the key to her chances where she produces her peak figures/performances. Expecting her to roll forward and back in distance is no issue.

Dangers: 7. Markwell Dreamer is 30 days between runs, but he was enormous in defeat last start at Taree after being heavily backed late in the trade $3.6-$2.6. Jockey Sam Clipperton rides from a soft draw, and his last win came over 900m. 5. Procrastinator is a track/distance specialist, and the wide draw is of little concern as it’s only one turn leading into the final straight. 6. Border Control ran time breaking through for his maiden win and will be charging late.

How to play it: Flying Annie WIN.
Odds & Evens: ODDS.

He has been a costly conveyance for punters but 8. Shalatin finds his easiest test with a perfect setup. He resumed as a gelding this prep and has only been beaten by narrow margins in high-rating races where he has started a well-fancied favourite. Further, he has a significant ratings edge over his rivals, the bigger track suits and maps to get the gun run.

Dangers: 14. Graceful Force, who presents as a key danger, has trialled well and strikes a dry track. She has a positive map to stalk the speed, receives a gear change and is a key late-market watch. 9. Wheedle is a knockout chance and is suited around Newcastle. Must go in all exotics. 13. Dear Jewel is coming through strong time races and add 11. In My Feelings who will make her luck up on the speed.

How to play it: Shalatin WIN.
Odds & Evens: EVENS.

Keen on 4. Infinitive third-up coming out of the Chris Waller yard, and all key indicators suggest she is ready to peak. The three-year-old was honest on debut and then had too much last start at Canterbury after being restrained early from a wide draw. Additionally, she rattled home some of the fastest closing splits of the entire meeting, and the form has since been confirmed with a subsequent winner. The filly receives a significant barrier change where she can settle closer from the kinder draw and is coming out of fast-time races at the metropolitan level. In addition, with even luck, expect her to be in the finish.

Dangers: 12. Highland Cathedral is a big improver and looms as a key knockout chance. The Bjorn Baker trained galloper will appreciate the rise in distance and the bigger track. Additionally, her ratings/sectional profile confirms this, and she is over the odds. 8.Twelfth Night was well backed $31-$12 late in the trade on debut, and she found the line well.

The filly will be fitter for that and finds barrier 1. Market watch on the first starter 2. Outsider who was ridden out in a recent trial, but the blinkers go on for race day. Add 7. Lady Townson to all wider exotics.

Leaning towards 11. Air Bentley, who represents value and profiles well for this event. The gelding wasn’t suited to the race setup last start at Muswellbrook, where he was 30 days between runs and up in distance but still ran on well into fourth place. The Ciaron Maher & David Eustace runner can improve significantly here with a more positive map, is reaching peak fitness and has figures that can put him in the finish. Each-way.

Dangers: 13. Paballo resumes and has trialled well enough recently at Rosehill. The gelding raced well first-up on debut and repeating that effort can put him near the finish.

12. Diaco is coming out of strong time races and is suited to going onto a dry surface. Add 10. Last Hand to all exotics.

2. Cheerful Legend resumed for his new trainer Nathan Doyle at Canterbury 16 days ago and was honest behind Ringmaster, who has subsequently won again in Saturday city grade. Further, the gelding found the line well and indicated that he would step off that performance which his historical ratings profile confirms.

Additionally, although comfortably held last prep, he started respectable prices in listed and group class races. The four-year-old has a tricky draw, but he can show his class and hit the line hard with the anticipated genuine tempo. Expect a bold showing.

Dangers: 8. Silk Tie has had no luck all prep and can bounce back into form down in grade. She can rate to win and is a key late-market watch. 9. Spanish Fighter resumes without an official public trial but can figure. 1. Two Up will be fitter and is suited up in trip.

How to play it: Cheerful Legend WIN.
Odds & Evens: EVENS.

Tricky race and leaning towards 7. The Maxinator who was building towards a peak performance last start at Canterbury, but nothing went right over an unsuitable distance. However, before that start, he found the line well running solid closing splits at Warwick Farm, and a repeat of that figure can put him in the finish. In addition, he drops in grade and maps to get the perfect run. Each-way.

Dangers: 12. Empress El raced flat second-up at Warwick Farm last start and can bounce back here. Last prep, she contested the Group 3 Adrian Knox (2000m), albeit being well beaten on a testing surface. She can settle closer up in distance and receives a senior rider. 1. Showtime Lady failed last start but has multiple winning figures for this. She is a key late-market watch. 11. Acosta is a nice type and won in style on debut 22 days ago. He will make his luck up on top of the speed. Add 10. Ironbark Artie and 14. Reggie’s Folly to all wider exotics.

How to play it: The Maxinator E/W.
Odds & Evens: SPLIT.