There was a contentment about Anthony Cummings on Tuesday morning as he looked at She’s Extreme after her final gallop before Saturday’s Golden Rose at Rosehill.

The Champagne Stakes winner had pleased the trainer once again with Tommy Berry in the saddle, the jockey having elected to stay with the Extreme Choice filly over Golden Rose favourite In Secret, which he rode to victory in the Run To The Rose. 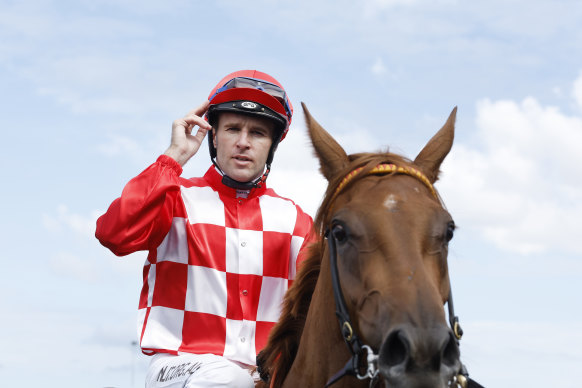 Tommy Berry returns on She’s Extreme after wining the Champagne Stakes in the autumn.Credit:Getty

“We sat down and worked out a plan a few months ago for her to be in this race on Saturday and it has worked out perfectly,” Cummings said. “Everything has gone right and she gets here in perfect order.

“We wanted that one run [where she was third behind North Star Lass in the Furious Stakes] just to have her ready for the 1400m and she has taken great benefit from that, even though it was on a very heavy track.

“It is not often you get to this point of a target race, and you can say there are no excuses, but that’s how I feel.”

The news got better for She’s Extreme a couple of hours later when she drew gate six in the field of 17 for the Golden Rose, for which she’s rated a $9.50 chance at Sportsbet.

Cummings will have to defeat the might of Godolphin led by its trainer and his son James, who the two at the top of the betting. The $2.80 favourite In Secret will jump from gate three while Ming Dynasty Stakes winner Golden Mile, is a $5.50 second pick after drawing gate 11.

“He has a couple of good chances but I wouldn’t want to swap him,” Cummings said.

Berry, who has been part of the planning for She’s Extreme, believes the barrier will allow him to put his filly wherever he wants in the running.

“I don’t think you would never knock back gate six. It just means we can be where we want to be,” Berry said. “Everything has been going so well with her. You are waiting for something to go wrong, and it didn’t with the barrier draw.

“She did exactly what we wanted in the Furious under the tough wet conditions, but it has really helped her and every time I get on her, she gets better.

“I’m very confident about her stepping up to the 1400m because she has been there before and performed at the highest level [when runner-up to Fireburn in the Sires Produce Stakes].”

Berry got a first-hand guide on In Secret in her explosive win in the Run To The Rose and admits she is the one to beat.

“She hasn’t been to 1400m and it’s a different test for her,” Berry said. “She was very brilliant winning the other day, but with a bit of rain around we could be looking at a wet track and could take that edge away from her.”

Meanwhile, Hugh Bowman had his 13-day suspension for failing to ride Lost And Running out to the line in The Shorts last Saturday reduced to seven days on appeal on Tuesday. It means he will miss Friday’s Moir Stakes, the Golden Rose meeting and Sunday’s Underwood Stakes at Sandown.