It all ends in mud, sweat and tears as four-time champion jump jockey Richard Johnson, 43, announces his shock retirement after 3,800 British winners from 21,000 rides

Richard Johnson, four-time champion jockey and one of the most successful jump riders in the history of racing, took the sport by surprise by announcing his retirement at Newton Abbot on Saturday.

The 43-year-old made his announcement after partnering Brother Tedd to third place in the newtonabbotracing.com Handicap Chase. Appropriately, Johnson’s last ride was for his long-time ally, trainer Philip Hobbs.

In an emotional announcement, a tearful Johnson said: ‘That’s it for me. I have had an amazing time but it is the right time for me to stop now. I wanted to do it on one of Philip’s. 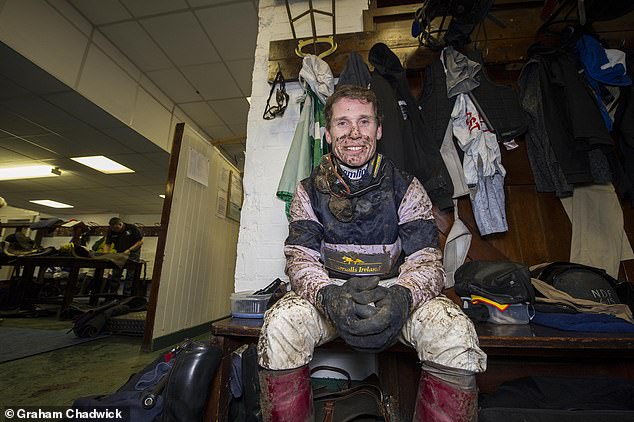 ‘I love riding and it has given me so much pleasure over such a long time. I have had support off so many people and been able to do much more than I ever dreamed of.

‘It’s time for me to do something else now and there will be lots of young lads in the Weighing Room who will be glad to see the back of me.’

Whoever tries to fill Johnson’s shoes have some challenge. His achievements were huge yet they tended to be kept in the shade because Johnson spent the majority of his career competing against Sir Anthony McCoy, a man whose achievements changed the sport.

Sixteen times Johnson finished runner-up to McCoy in the jump jockeys’ championship before finally claiming the crown for four consecutive seasons after his old adversity retired. 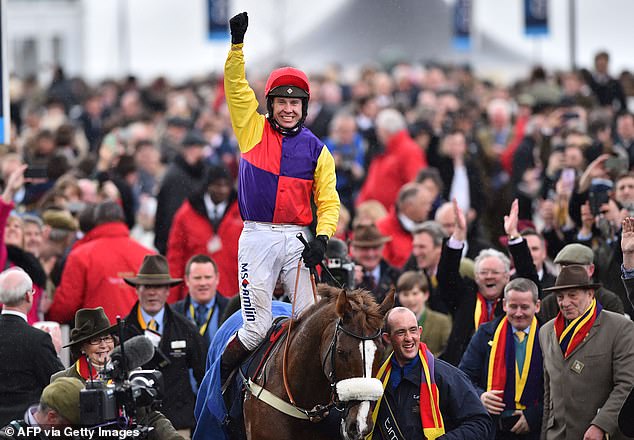 Both men shared a work ethic that drove their careers no matter what physical or mental obstacles they faced.

Appropriately, McCoy led the tributes to Johnson, tweeting: ‘Sometimes those who challenge us the most teach us the best. You did both to me for over 20 years and I will be forever grateful to you, thanks buddy. When you go home tonight look in the mirror and you’ll see what a champion looks like.’

A glance at Johnson’s career statistics show he was much more than a racing bridesmaid. He booted home 3,800 British winners — only McCoy has ridden more — from more than 21,000 rides.

Among them were two Cheltenham Gold Cups — Looks Like Trouble in 2000 for his father-in-law, trainer Noel Chance, and Colin Tizzard-trained Native River in 2018. Johnson won the 2003 Champion Hurdle on Hobbs-trained Rooster Booster in 2003. 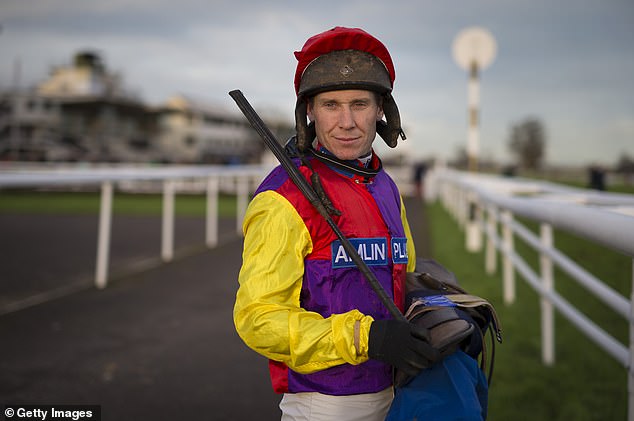 His 23 Cheltenham Festival winners included the 2002 Queen Mother Champion Chase on Hobbs-trained Flagship Uberalles, while his first Festival win came on Anzum in the 1999 Stayers’ Hurdle for the late David Nicholson, the trainer who gave Johnson’s early career impetus. He had left school at 16 to join Nicholson’s stable near Cheltenham and was champion conditional jockey in 1995-6 by the time he was 18. Johnson’s first ride as amateur jockey was on the family-trained Rusty Bridge in January 1994 when he finished fourth in a Chepstow Hunter Chase.

The same horse gave him his first win in April that year. Appropriately, the success was at Hereford in his home county. Among the people Johnson thanked yesterday were trainers Peter Bowen, Henry Daly and Milton Bradley but also physiotherapist Kate Davies.

He credited her for prolonging his career when it was threatened by a chronic hip injury that was related to muscle wastage that followed a leg fracture.

Davies, who has worked with rugby players and ballet dancers, devised for Johnson a series of Pilates exercises.

Johnson lost his crown to Brian Hughes in last season’s shortened campaign, a broken arm scuppering his hopes, and his 75 winners this season place him seventh in this year’s title race. 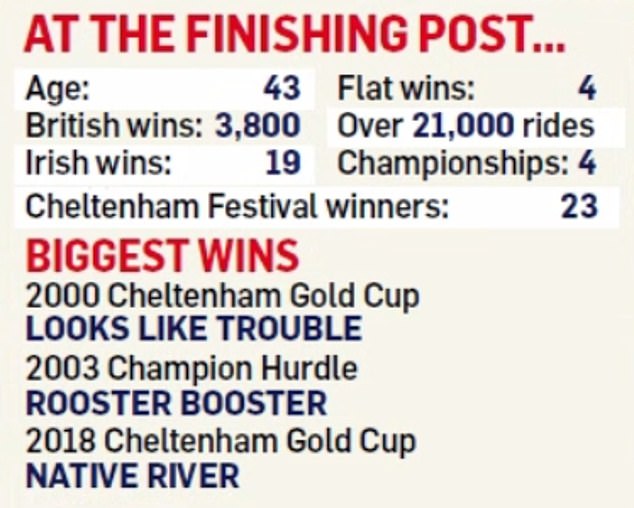 Johnson, who was awarded an OBE for services to horseracing in the 2019 New Year’s honours list, has ridden in 21 Grand Nationals — more than any other jockey.

He finished second in 2002 on Hobbs-trained What’s Up Boys and in 2014 on Balthazar King but it was never a race he really liked, so it no surprise he retired just before it is run next Saturday.

Nor is it that he decided to exit the stage on a day at Newton Abbot when racing was held behind closed doors apart from a few owners.

Hobbs, his wife Sarah and his key staff were present as were Johnson’s Weighing Room colleagues. Johnson was a man who never sought the limelight.

He is likely to spend much of his time now on the family farm and with his family, wife Fiona and children Willow, Caspar and Percy.