Flemington’s revamped Stakes day, now known as Champions Day, is shaping up as the ultimate climax to this year’s carnival, and appears to have paid dividends on the Victoria Racing Club’s gamble.

In June, the club formally announced it was moving the Cantala Handicap from the first to the fourth day of Cup week and turning it into a weight-for-age mile, as part of a rebranding of the final day of the Melbourne Cup Carnival. 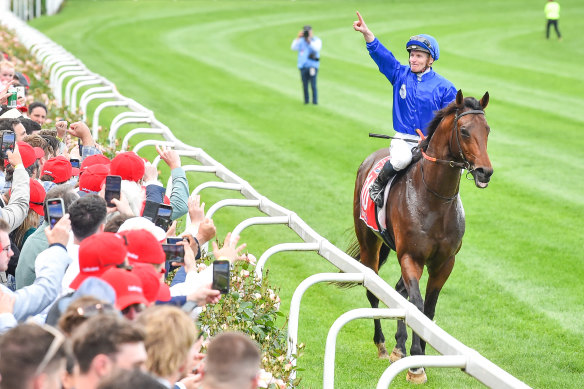 Anamoe is one of the headline acts at Flemington again on Saturday’s Champions Stakes day.Credit:Getty Images

It’s turned out to be a huge success, with 20 individual group 1 winners accepting their place among the three fields for the Champions Sprint, Champions Mile and Champions Stakes, including six runners out of this year’s Cox Plate.

Everest winner Giga Kick will also clash with Nature Strip down the straight, along with Manikato Stakes winner Bella Nipotina.

“Without a doubt it’s changed the face of the carnival,” he said.

“It’s now the climax of the entire Victorian spring carnival. Pat on the back to Leigh Jordon, it was his vision. I bet he didn’t even think it would pan out this well in its first year. It’s going to be a great day.”

“You’ve got to try these things,” the VRC’s executive general manager of racing said. 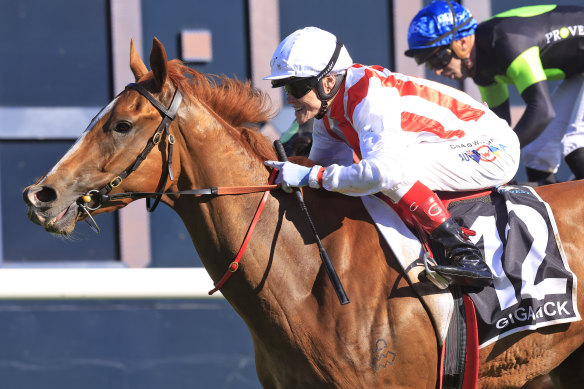 Everest winner Giga Kick will again take on Nature Strip down the straight.Credit:Getty

“It’s not a knee-jerk reaction, we’ve been planning it for a while and Racing Victoria have been a big part of it as well. I think it’s a great way to finish the carnival.”

Kent jnr said I’m Thunderstruck was ready to tackle Anamoe once again, after finishing second to the Godolphin star in the Cox Plate.

“We’d love to beat Anamoe, but we’re under no illusions he is the best 2000m weight-for-age horse in the country,” Kent jnr said.

“You could argue he [I’m Thunderstruck] could have beaten him last start if you reversed the barriers, but Anamoe is one of those horses who executes his races perfectly.

“He’s got good tactical speed, and he just does enough. Who knows if he would have fought us off, but we were chasing hard last start and yes, I would love to beat the Sheik.”

The team did consider freshening I’m Thunderstruck back to the mile, but the stable thought he could be competitive once again at 2000.

Meanwhile, Mr Brightside has been brought back to 1600m. He finished second in the Cantala last year, and co-trainer Ben Hayes said he just needed a cosy run to be competitive on Saturday.

“Really happy with him. He’s done well since the Cox Plate,” Hayes said.

“I think going back to the mile will be very suitable.

“He showed in the Cox Plate he has a really good turn of foot. He actually had a better turn of foot than Mo’unga and I’m Thunderstruck, but over 2000 they were just stronger late.

“From barrier four on Saturday we’ll be able to hold a more prominent position, have a better run in transit and if he’s thereabouts, he’ll run pretty well.”

Hayes said Mr Brightside had the right form to be winning.

“But Anamoe, I’m Thunderstruck and Zaaki have gone to the other one, and it’s the first time he hasn’t taken them on in three runs, so I’d say he’s as good as everything else in that race, and the horse with the right run will win.”