Racing sometimes gets criticised for a lack of diversity as the most successful owners, trainers, breeders and jockeys have often grown up in the "racing bubble", from families steeped in the sport for generations.

Of the top 20 riders on the Victorian metropolitan jockey table, only Mark Zahra has what might be termed a non-Anglo/Irish surname. On the trainers top 20 list there is only slightly more variation, with Tom Dabernig, Simon Zahra, Matt Cumani and Matthew De Kock having surnames outside the Anglo/Irish norm. 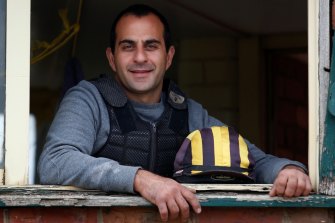 Saab Hasan's life-long passion for horse racing has seen him leave war-torn origins, migrate to Australia, learn English and hold down multiple jobs to get a start in the industry and now be recognised. Credit:Eddie Jim

Of course that doesn't mean they haven't been involved in Australian racing or society with families that have deep roots as migrants to this country decades ago. Dabernig is part of racing's establishment, as part of the legendary Hayes family from South Australia, while Cumani's father, Luca established himself as one of Britain's top trainers after moving to Newmarket from Italy.

But the general rule still holds true. Making it as a trainer is difficult as connections, expertise and capital (to rent stables and buy horses) is harder for newcomers than those born into the game.

That hasn't deterred Flemington-based handler Saab Hasan, whose story demonstrates that hard work, some luck and the support of people prepared to back a fresh face with no racing connections can bring rewards.

All four of us arrived here with no money and just a little bit of clothing. Dad straight away got to work at Myers as a cleaner, with mum.

He was nearly five when he arrived in Australia with father, Aykul, mother, Behiye and sister, Saver when the family – Turkish Cypriots with a Muslim background – fled the violence of the Greek-Turkish war that ravaged Cyprus in the mid-1970s.

"All four of us arrived here with no money and just a little bit of clothing. Dad straight away got to work at Myers as a cleaner, with mum," he explained.

"We went to school here at Debney Meadows primary. I could not speak a word of English and had to learn quickly. My sister looked after me and coached me through everything and watched my back."

I could not speak a word of English and had to learn quickly. My sister looked after me and coached me through everything and watched my back.

The family found themselves in the housing commission flats in Flemington.

"I always felt in my heart that I wanted to work with horses and animals. My dream was alive in Cyprus when I was very young. My grandad [Cemil] always told me to follow my heart, and I really felt that working with racehorses was what I wanted to do," Hasan said.

"Whether it was fate, I don't know if it was destiny. Not having any background or experience in racing, I didn't know what I was up for, but it must have been fate for me to land in Flemington. I was like a kid in a lolly shop.

"Living in the commission flats we didn't have a lot of money or opportunities and I had to grab whatever chances I could. I worked with Mick Cerchi, I worked with all the Cerchis, they were all great horse people. 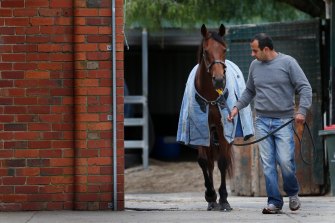 Saab Hasan with one of his horses, Shoreham, at Flemington in 2014. Credit:Eddie Jim

"I came down at the age of 14, and I said I wanted to learn to be a horse trainer. I said to Mick, 'You better teach me, and I am ready to learn.'

"I did about 18 years with the Cerchis to learn properly. I also worked for Johnny Sadler, Bart Cummings and the Hayes stable in that time too, short stints about 12 months."

Hasan got his licence in 2004 and has been steadily trying to build a small scale boutique business – he has just over a dozen horses in his care – ever since.

I had to virtually start from zero. I backed myself, I had to fund myself, sometimes I did two and three jobs to survive, loading trucks for Toll transport, loading airfreight at the airlines and then coming to work.

"I had to virtually start from zero. I backed myself, I had to fund myself, sometimes I did two and three jobs to survive, loading trucks for Toll transport, loading airfreight at the airlines and then coming to work," he said.

"There's days when it felt like I was working 24/7, but I wanted to survive and be a horse trainer. For the first time I feel as if I am just starting to get recognised."

Hasan is hoping his star horse, Sirius Suspect, who won the group 3 Standish at Flemington on New Year’s Day, can be his breakthrough star. He is targeting him at the group 1 Newmarket Handicap later this summer and he will not run again before that test.

Victory in one of Australia's greatest races would certainly help put the immigrant from Flemington's housing commission flats on the map at the suburb's greatest landmark.