Former jockey David Crosse reckons he and former weighing-room colleague Noel Fehily are like ‘chalk and cheese’ but they have gelled into a perfect combination after launching their racehorse ownership syndicate operation.

Noel Fehily Racing landed their first Cheltenham Festival win last season when Love Envoi, trained by Harry Fry, won the Mares’ Novices’ Hurdle and she will return to the biggest meeting in the jumps calendar a leading contender for the Mares’ Hurdle.

Joining her in March will be the Paul Nicholls-trained Tahmuras, the shortest priced British hope for the Supreme Novices’ Hurdle after his victory in the Grade One Tolworth Hurdle at Sandown. 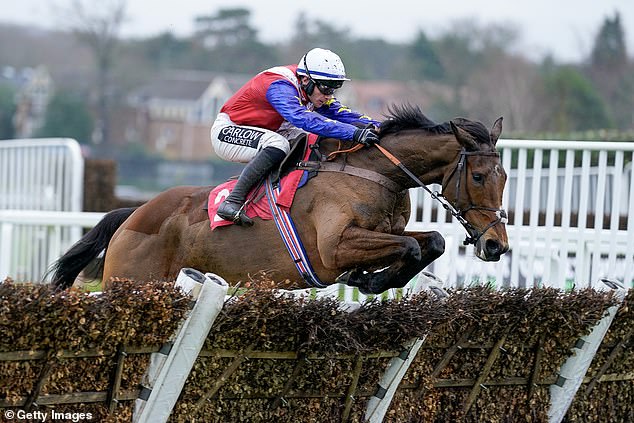 Racehorse syndicate ownership is an increasingly competitive market but the time Crosse, the gregarious one of the pair, and Fehily spent in the saddle is their unique selling point.

Crosse, champion amateur jockey before turning professional, said: ‘Noel picked me up when I came over to ride for trainer Charlie Mann when he was a stable jockey. We have always been great mates and lived together. We are a bit like chalk and cheese and I do a lot of the talking!

‘When he stopped riding, I went to him with the syndicate idea. If two ex-jockeys can’t sit on the horses and choose the right ones, who can? Between us we rode for about 45 years. We have plenty of experience and I like to think that gives us a big advantage.

‘We have 27 horses with 25 in training and we are always looking to build on that. We do plan out a lot of the races with the trainers and we buy the horses together.

Fehily, who retired from riding in 2019, was far more successful during his career, being crowned champion conditional jockey in 2001. His seven Cheltenham Festival successes included two wins in the Champion Hurdle on Rock On Ruby in 2012 and Buveur D’Air in 2017.

Rather than being employed by trainers, they now work for him and the syndicates’ string is shared between a roster which also includes Anthony Honeyball, Nicky Henderson, Alan King, Tom Lacey, Gary Moore, Fergal O’Brien, Jonjo O’Neill, Dan Skelton and Noel and Ian Williams, plus Willie Mullins in Ireland.

Fehily, who had another victory for one of his syndicates when Hitching Jacking won at Wetherby on Saturday, said: ‘We originally thought we would have a couple of horses for a bit of fun. We never thought we would get to the numbers we have.

‘We sell 10 per cent shares in every horse and that seems to work well. You can keep everyone fairly well informed — bigger numbers probably wouldn’t suit us.

‘You won’t sell shares just by talking. You need the horses to perform and you have to have success.’